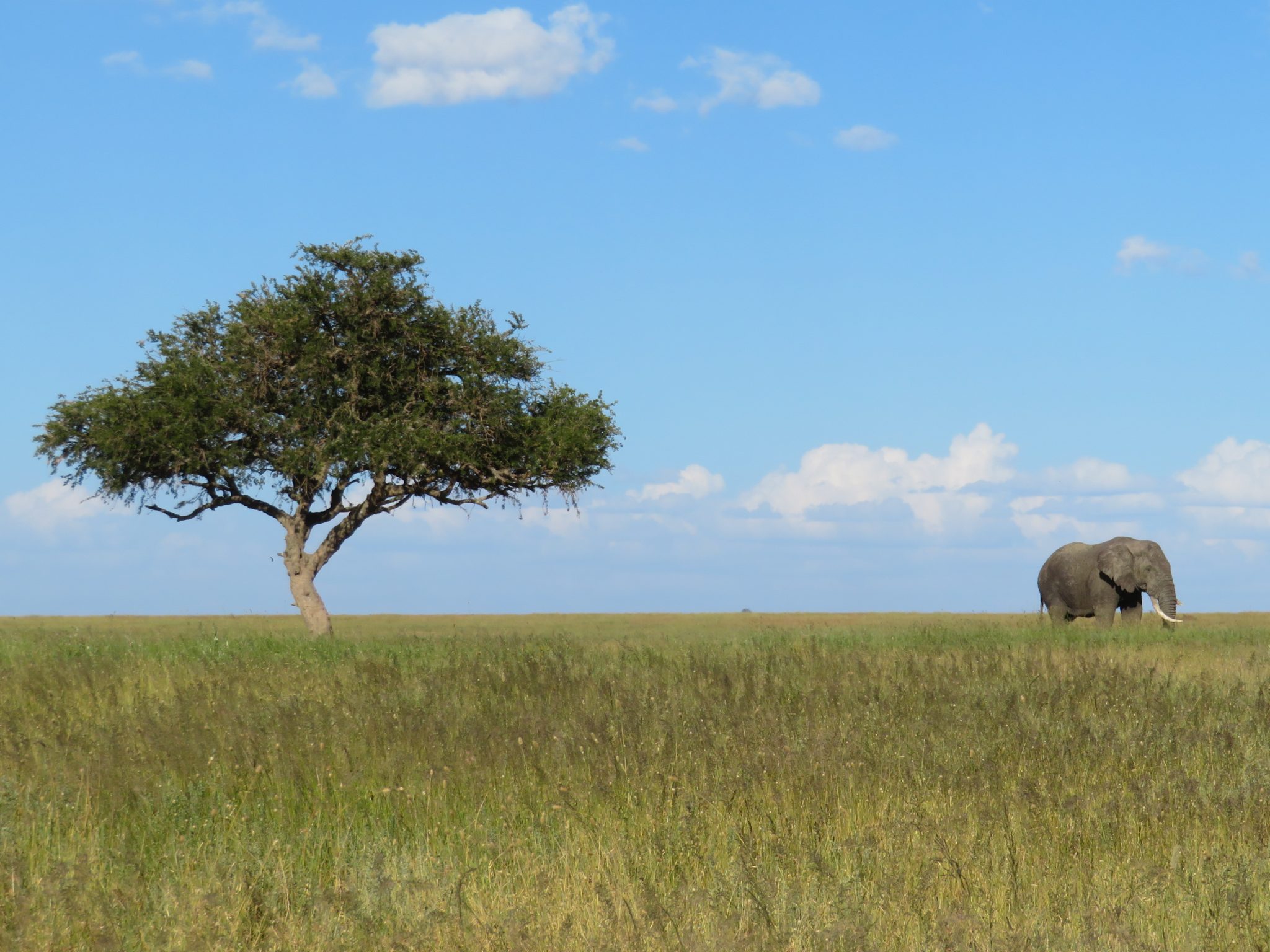 Since we can’t travel right now (June 2020), I’ve been creating blog posts for some of our trips prior to the creation of this blog. One of our absolute favorite trips was our African safari and dive trip in Tanzania in 2018. Here’s Part 1 of this fabulous experience!

February 2018 — It’s never easy to get halfway around the world, but KLM made it bearable. We flew ten hours to Amsterdam (from LAX) and then another 8 ½ hours from Amsterdam to Arusha, Tanzania. We were concerned that a flight delay might result in a missed connection, so we came a day early and enjoyed a relaxing time at Katambuga, a small hotel owned by Matembezi, our tour operator (https://www.matembezi.co.tz/), which included airport pickup and a field trip to a local shop to buy handcrafts and jewelry (my first and only piece of Tanzanite!).

The next day our tour guides Onesmo and Duncan loaded up two Land Cruisers with the twelve of us–we were all part of a group arranged by Bluewater Dive Travel (https://www.bluewaterdivetravel.com/), all scuba divers who also wanted to do a safari.

Safari Day 1: We drove through small Maasai villages, passed an enormous termite mound, and then explored Tarangire National Park. The amount and variety of wildlife began on this day and continued throughout our five days on safari. If you prefer to watch our 6 1/2-minute YouTube video of the safari, here’s the link: Tanzania Safari Video 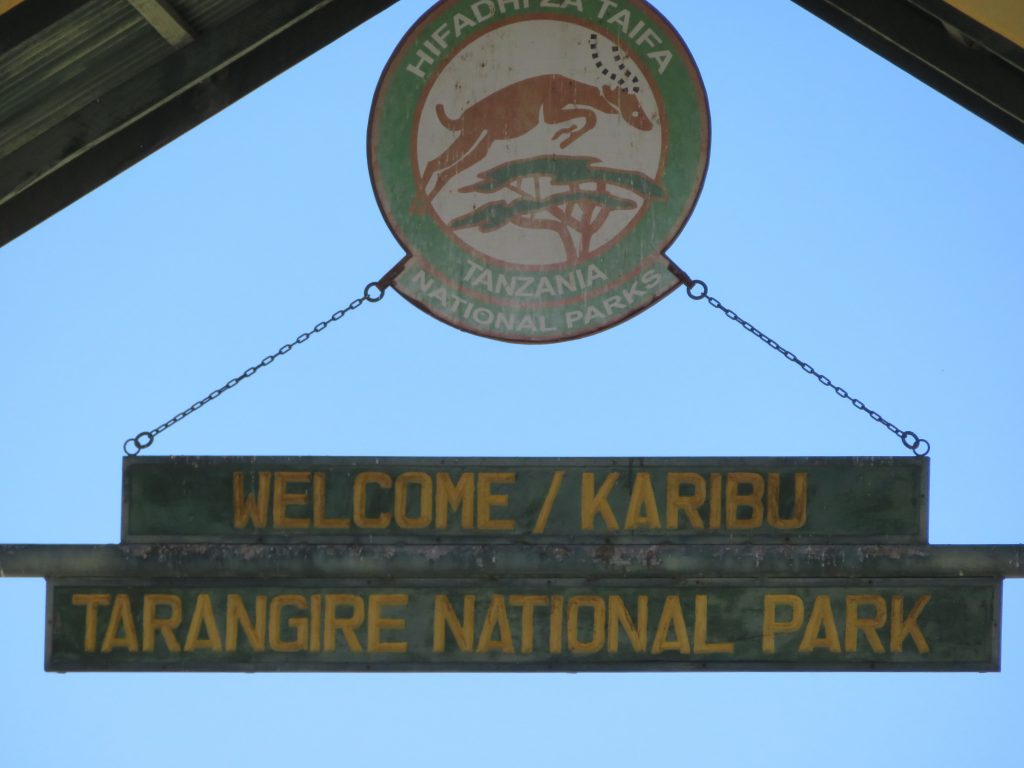 We were like kids in a candy store as we spied black-faced vervet monkeys, banded mongoose, impalas, giraffes, and two of the African Big Five—Cape buffalo and lots of elephants. 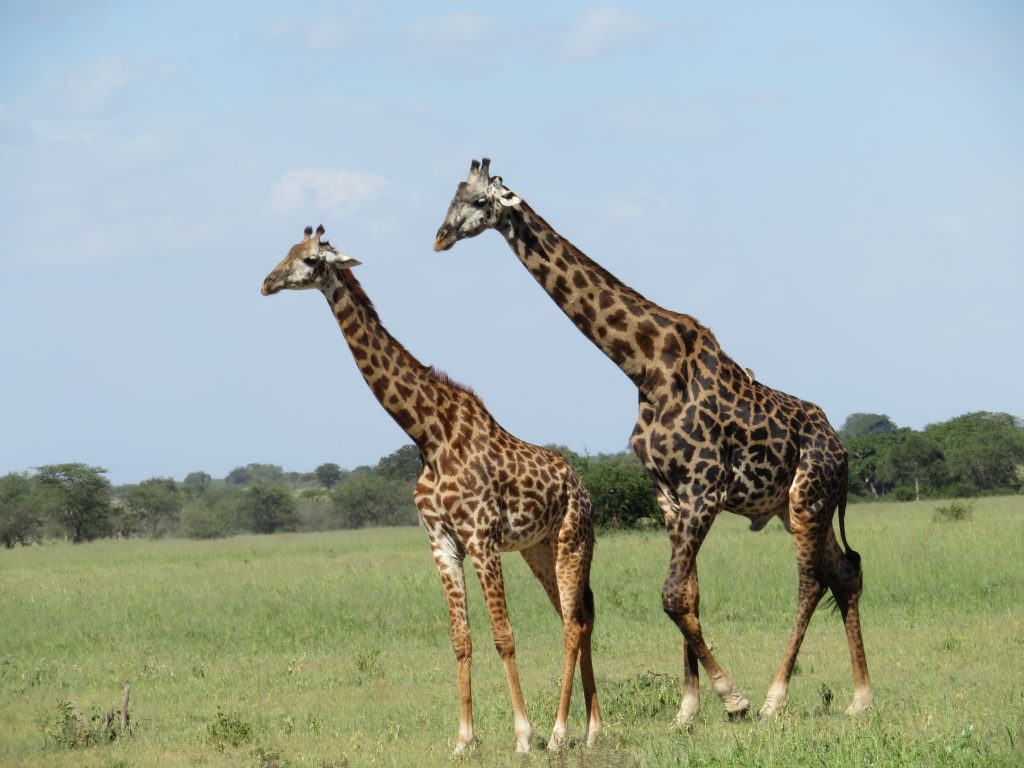 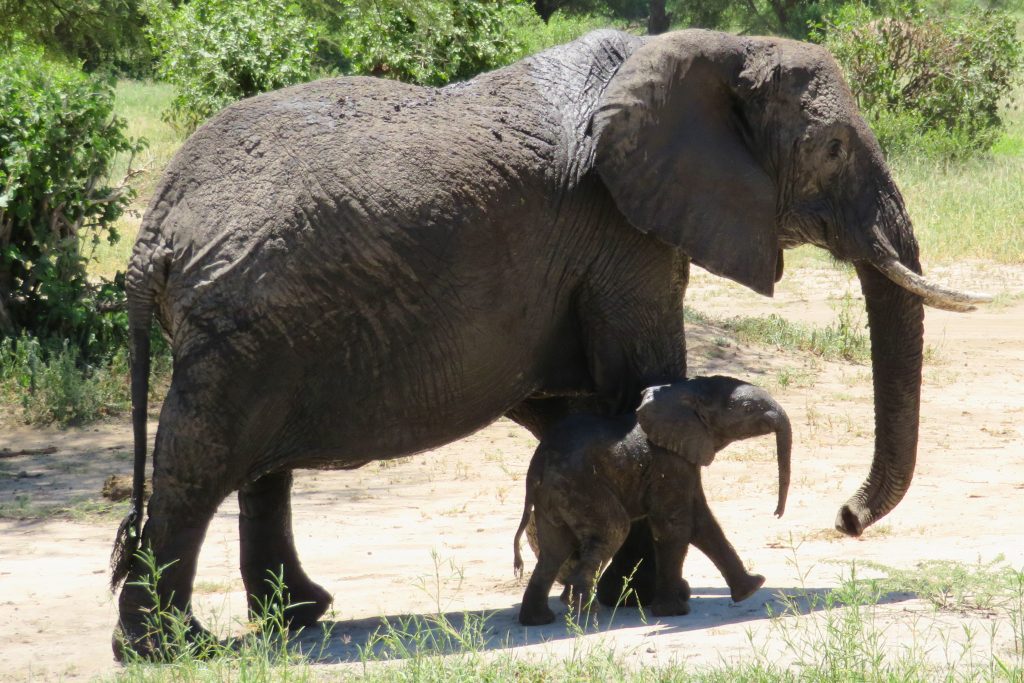 We also saw striking and amazing birds, including the African pied wagtail, the grey-crowned crane, the marabou stork, and the iconic ostrich.

Two unique highlights of this first day:
1. Seeing a giraffe bend down to take a drink of water—it’s actually really difficult for their long legs to allow them to reach a pool of water on the ground!
2. Seeing a group of four cheetahs hanging out under some trees, possibly having recently eaten a kill. This turned out to be our only sighting of cheetahs on the trip, so it was very precious.

Safari Night 1: We exited Tarangire and headed to Maramboi Tented Lodge (http://twctanzania.com/accommodation/maramboi-tented-lodge/) on the shore of Lake Manyara, where we were greeted by hundreds of zebra, giraffes, wildebeest, warthogs and impala hanging out around the camp. Our hotel room, a large tent on a raised platform, gave us a close-up view of the wildlife, and we relaxed on the hotel deck enjoying sunset in this magical place. 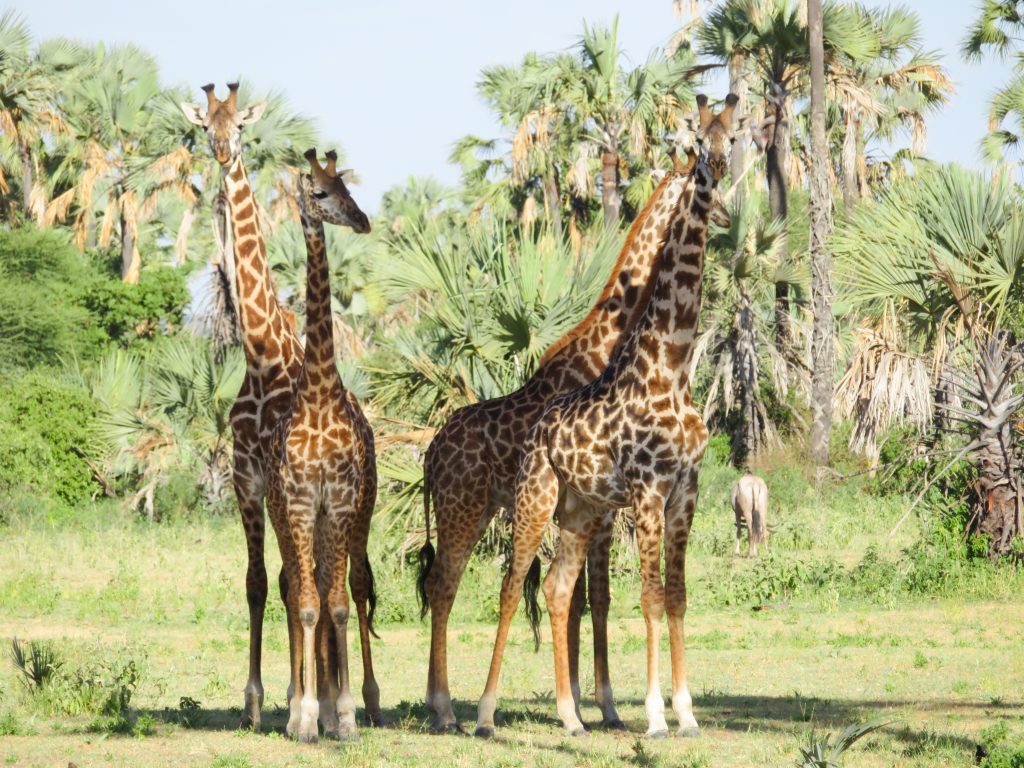 Safari Day 2: Before we left Maramboi, we enjoyed an early morning walk across the dry lake bed of Lake Manyara, led by a Maasai guide. The Maasai are a semi-nomadic people living in Kenya and northern Tanzania, herding cattle, sheep, and goats, and living almost entirely on meat, milk, and blood. Wealth is measured in cattle and children, and Maasai leaders often have multiple wives (in one village we drove through, the chief had 100 wives). In northern Tanzania, the Maasai frequently live in or near conservation areas, alongside wild animals, because they do not hunt or kill these animals.

Our guide for our early morning walk was dressed in traditional garb and helped us understand Maasai traditions as we went along. Lake Manyara has water in it, but this portion was dry, as the rains had not yet come. 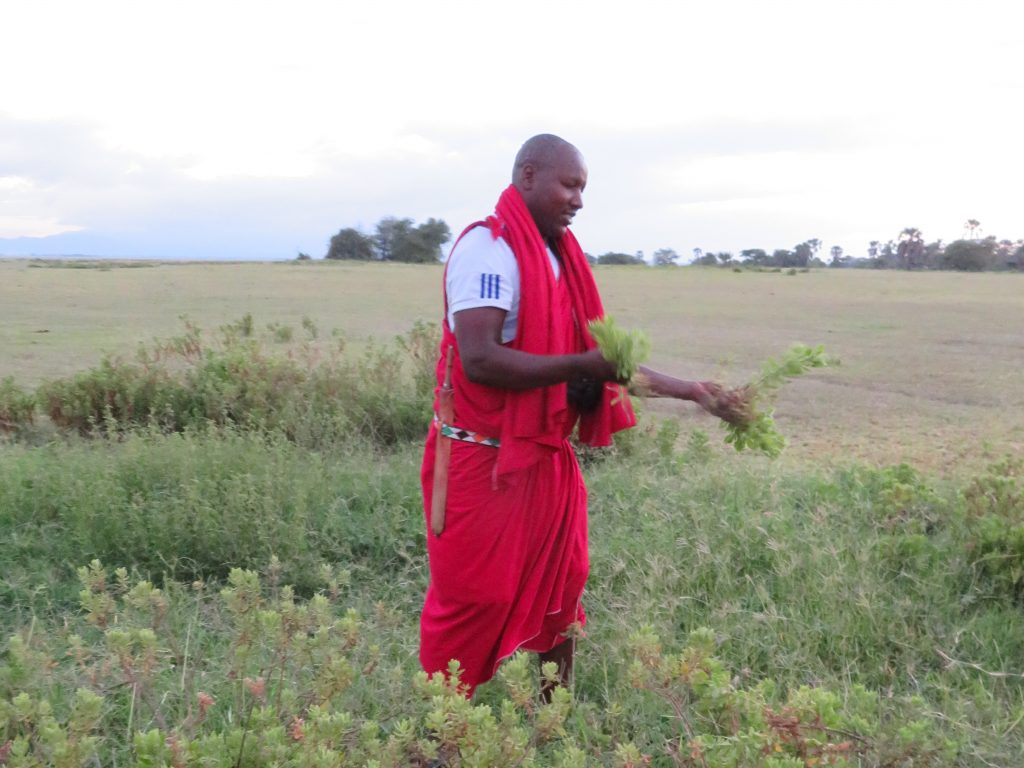 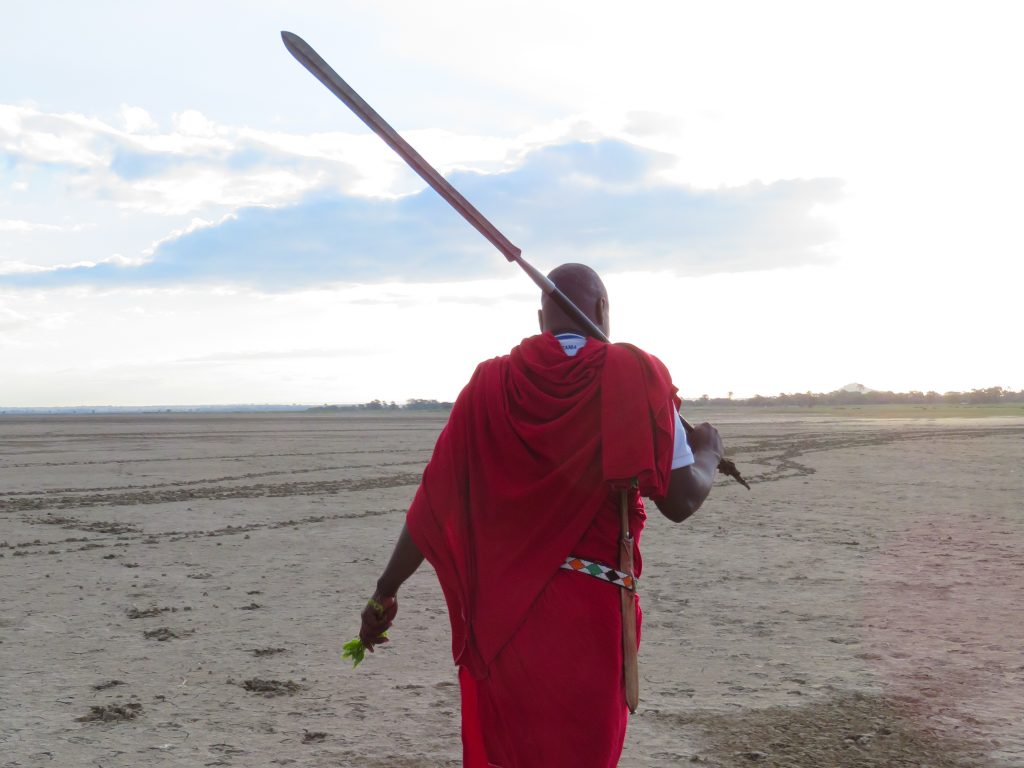 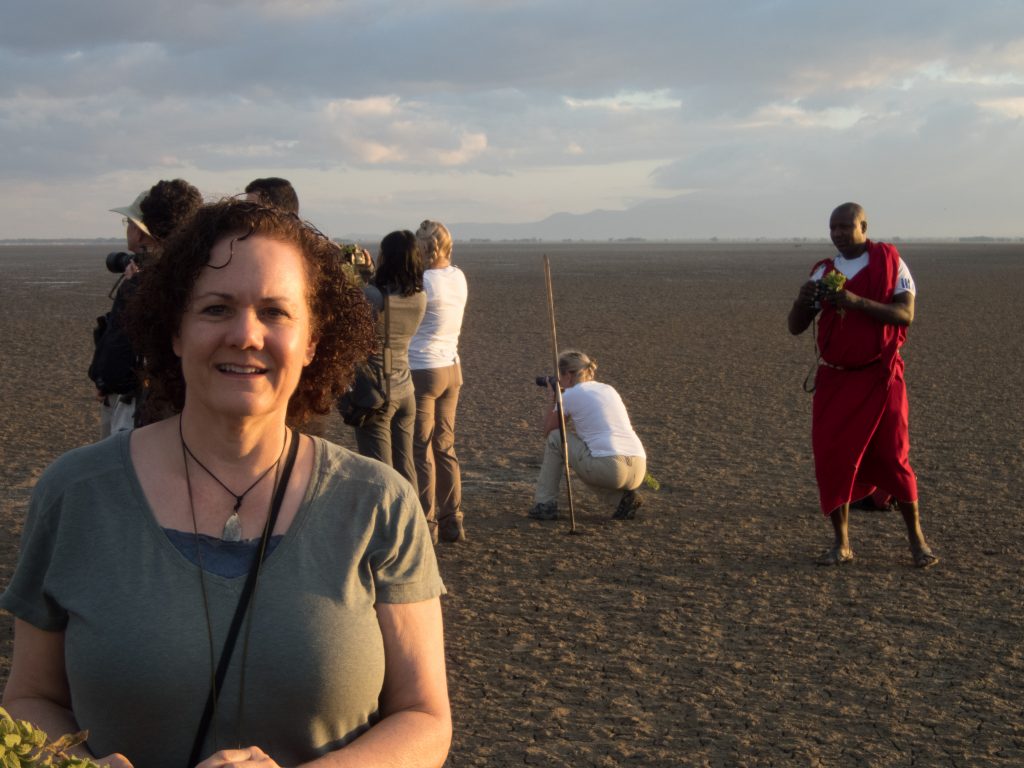 Our destination? The edge of the lake where flamingos shone in the sun. At breakfast we were further entertained by baby warthogs.

We headed out in our vehicles to a local village market, where animals, vegetables, cloth and appliances were all for sale. 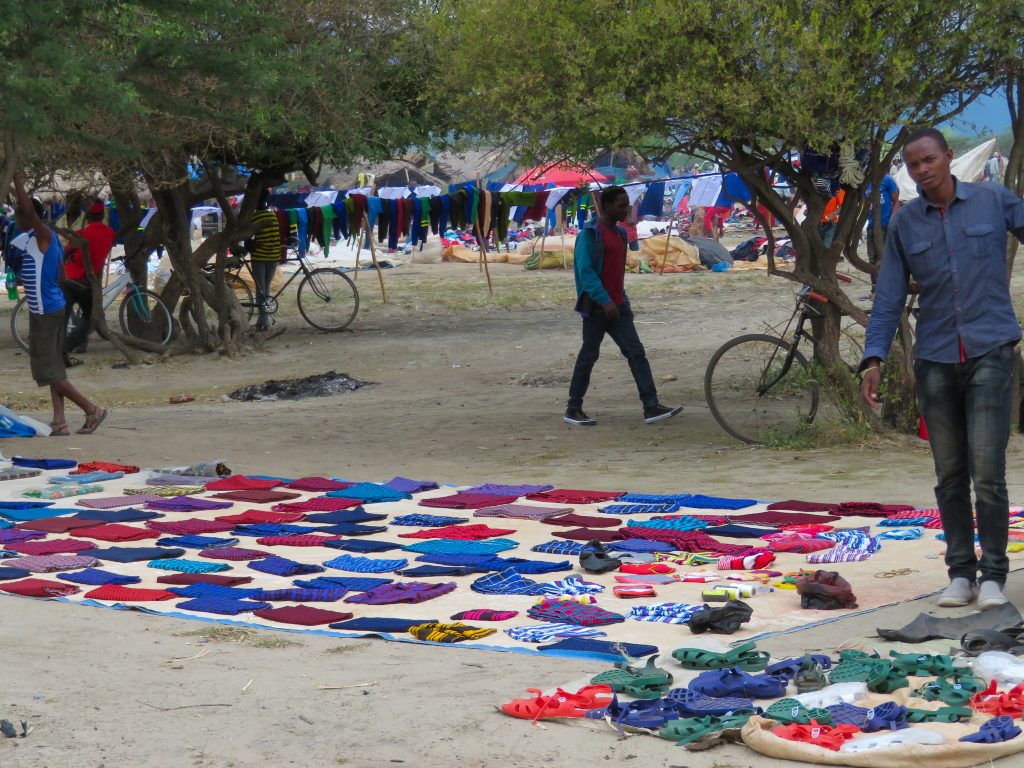 This area was more mountainous than yesterday, with some steep and windy dirt roads! This was our only sighting of an African open-billed stork! 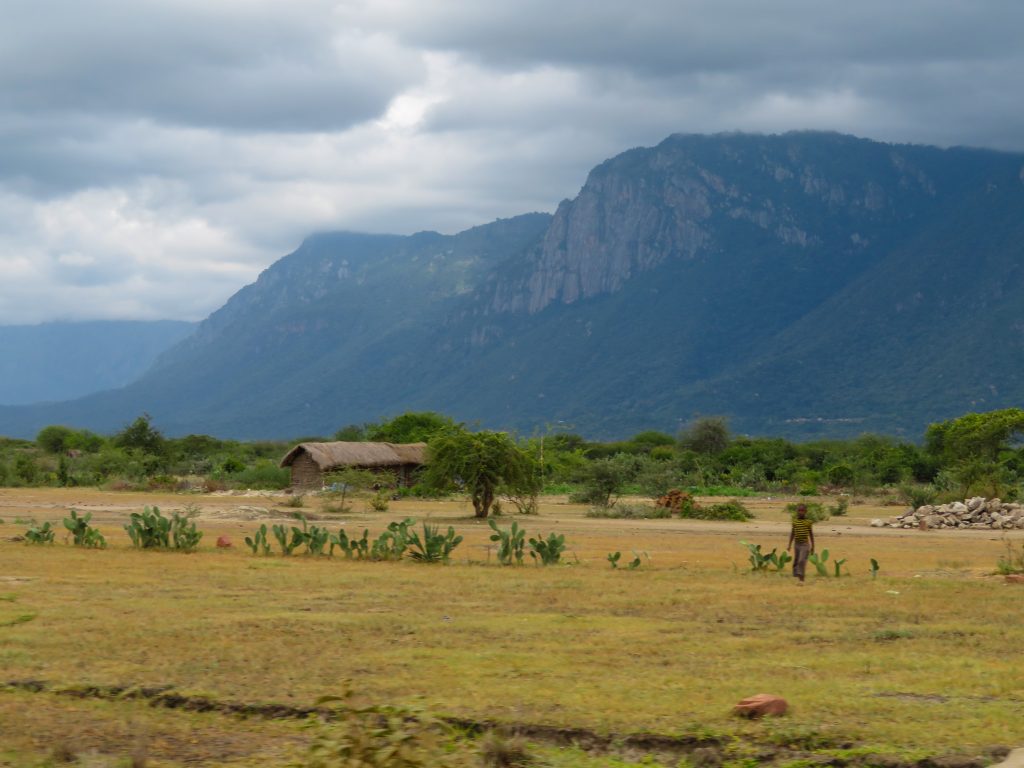 After entering Lake Manyara National Park, we spent the rest of the day enjoying the wildlife. Small critters, like leopard tortoises and Kenyan rock agama lizards, were intriguing, but we were especially fascinated by the baboons and southern ground hornbill with a snake in its mouth.

Lunchtime was spent near a hot springs area of the lake where the flamingos numbered in the thousands. They eat microscopic algae, which is what makes them pink.

More baboons, Cape buffalo, and black-faced vervet monkeys continued to entertain us, even while we faced a bit of engine trouble on the road.

Nevertheless, we made it successfully to our lovely Country Lodge Karatu hotel, where mosquito netting was not even needed for the night! 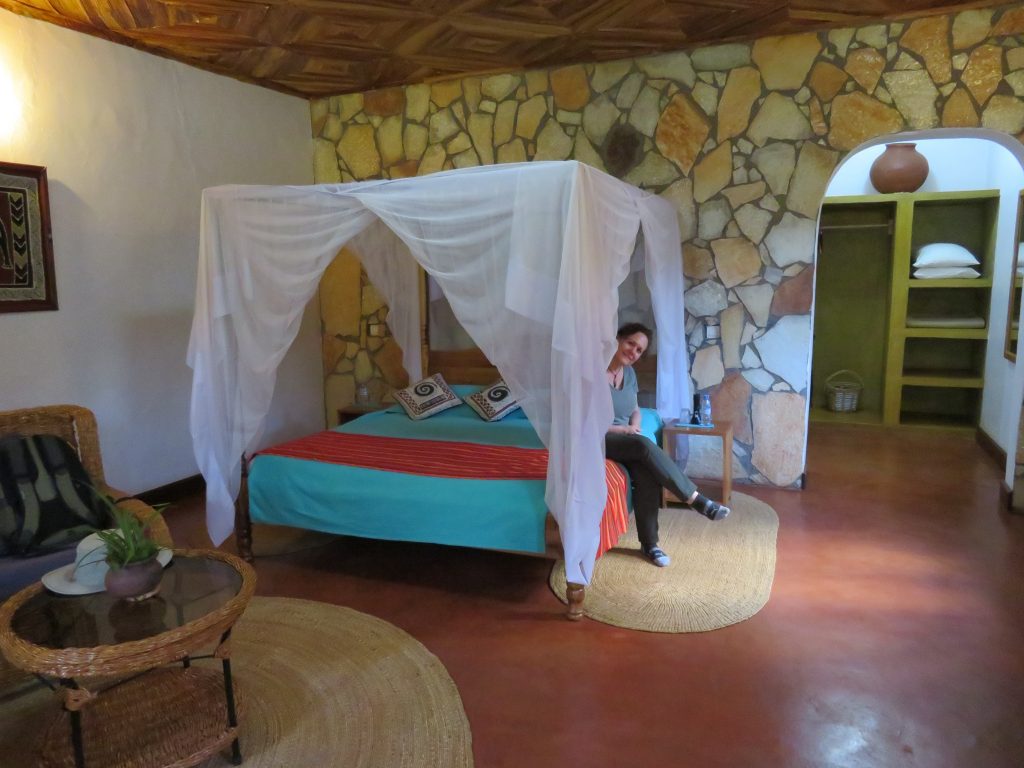 Safari Day 3: Maybe you’ve been wondering if we would see the rest of the African Big 5 animals (we’d already seen Cape buffalo and elephants, but no rhinoceros or leopards, and only a faraway view of a lion). Well, Day 3 of our safari added two more of the Big 5, plus other fantastic sights.

We first traveled through the Ngorongoro Conservation Area, viewing the Ngorongoro Crater from the road up above (we were scheduled to enter the crater on Day 5). This was a wonderful way to take in the sheer enormity of the crater (actually the world’s largest inactive, intact collapsed caldera, similar to Yellowstone in the U.S.). We got out the binoculars and spotted a black rhinoceros. We couldn’t see it very close, but the distinctive horn was there. Black rhinoceros are so endangered that each one is guarded by conservation staff. There are apparently 50 that reside in the Ngorongoro Crater. So that was number 3 of the Big 5, and we were happy to see it! 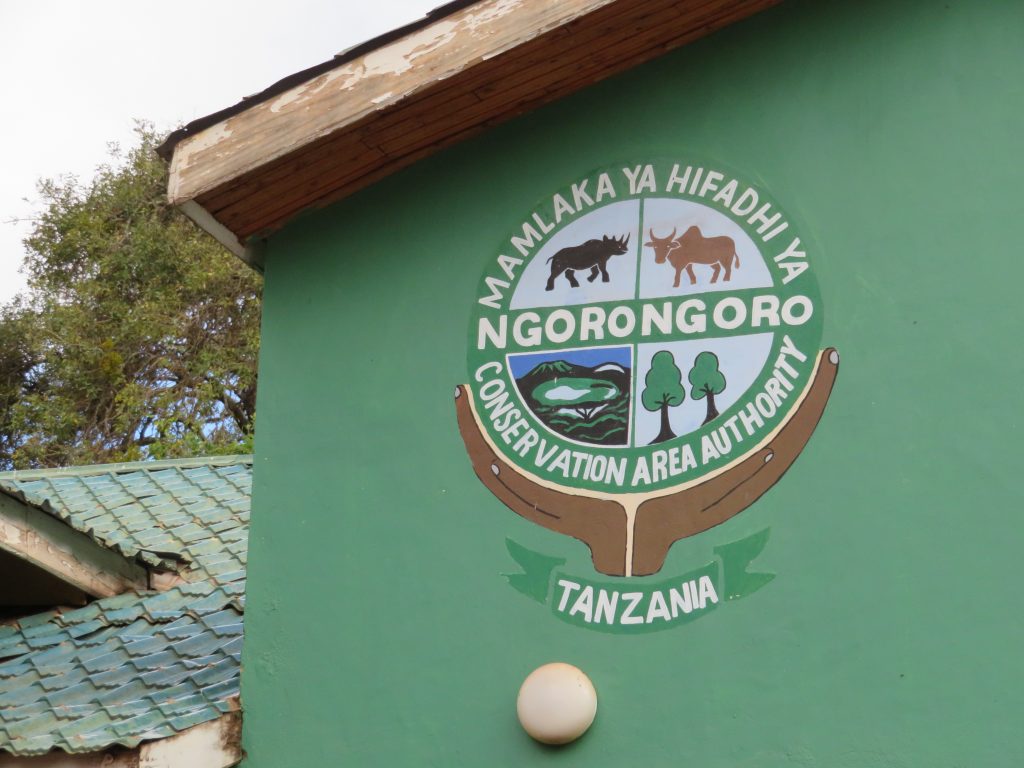 As we traveled through the conservation area, where Maasai, their herds, and protected wildlife live side by side, we got more of a sense of the African savanna, a tropical grassland with dispersed trees, and a fascinating mix of zebras, giraffes, wildebeest, elephants, and too many antelope species to name.

Our morning also included a drive through wonderful landscapes where we saw newborn wildebeest, white-backed vultures eating the afterbirth, an augur buzzard, and a kori bustard.

This area is also home to several Maasai villages, and our lunch stop by the side of the road attracted the attention of some Maasai boys who were out watching sheep and goats (a traditional task for Maasai children). They walked a long way to our lunch spot and our guides let us know that while it was okay to give them some natural food, like our fruit, it was not okay to give them processed food. Because they live almost entirely on milk, meat, and blood from their cattle, sheep and goats, the children are often malnourished, but their systems cannot handle anything but the simplest of fruits and vegetables. They were happy to pose for pictures, and left with a number of pieces of fruit. We were surprised by the amount of flies around their eyes, and our guides told us that trachoma and resulting blindness are big problems in the Maasai community. 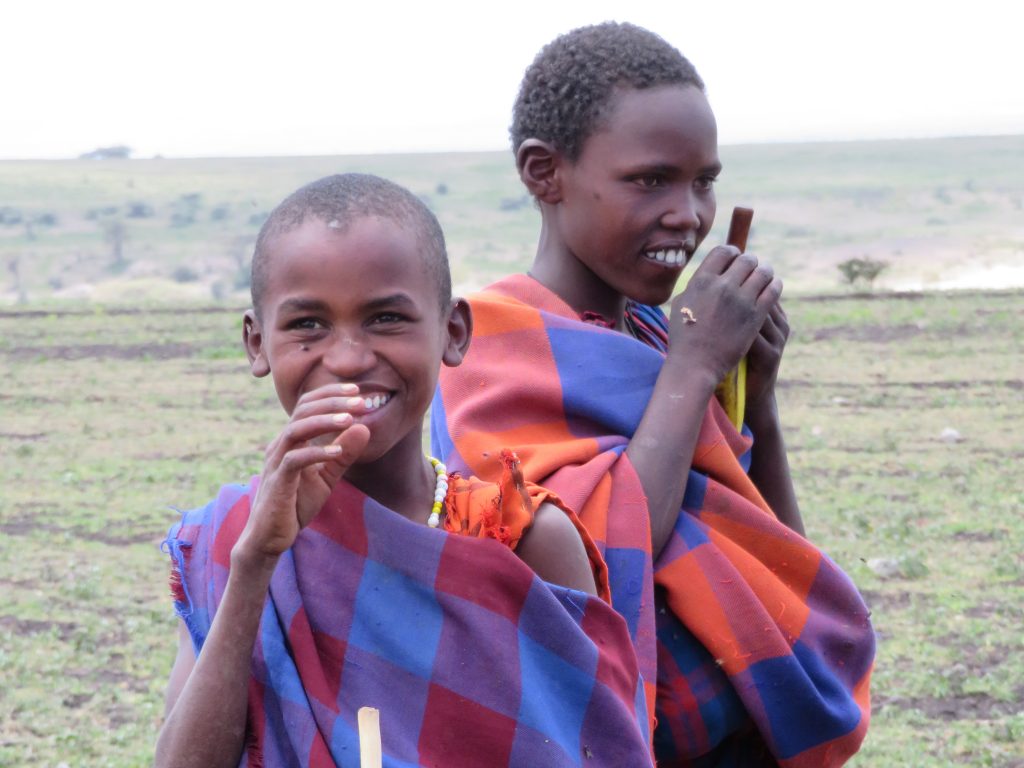 We also met a number of Maasai women on the road, and they too were happy to pose for pictures (in exchange for a little money).

More amazing encounters with elephants, plus a number of new antelope species—eland and Thomson’s gazelles (the fourth fastest animal on land)—gave us a sense of wonder throughout the day. Apparently there are over 72 different antelope species in Africa! 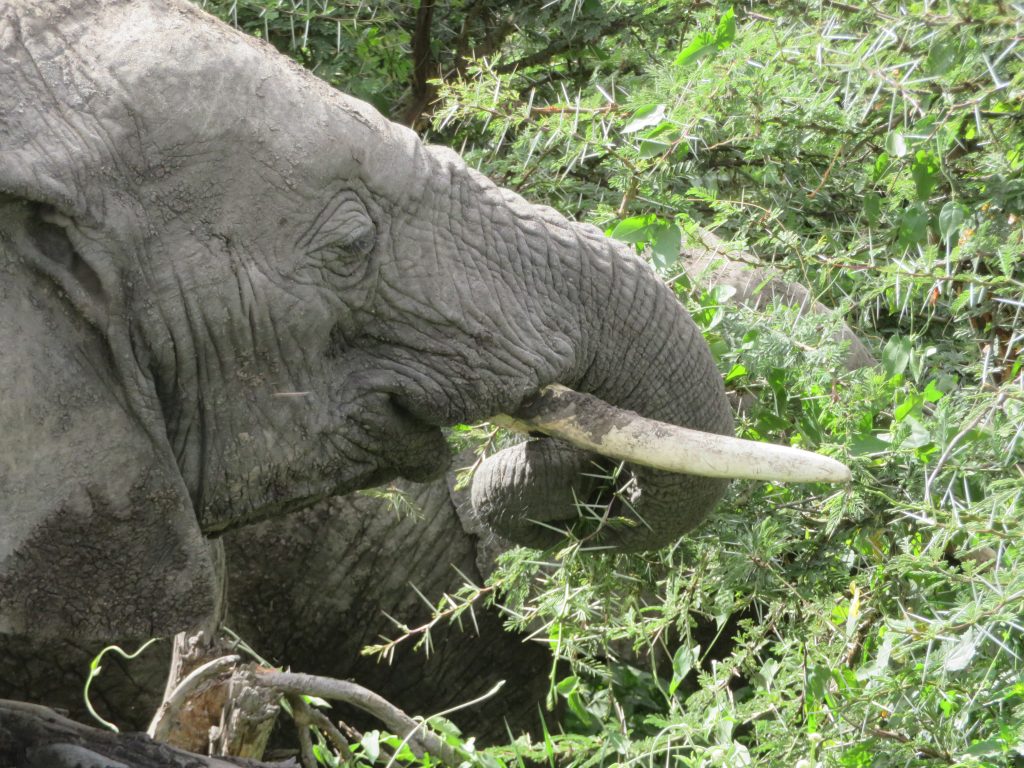 By late afternoon we entered the Serengeti National Park, contiguous with the Ngorongoro Conservation Area, got our permits, and went out in search of lions (number 4 of the African Big 5). We watched a mating male and female for over an hour, and learned that a male and female pair will leave the pride for 4-5 days and will mate about 100 times per day during that time.

On our way to our camp for the night, we encountered more classic animals—hyenas, jackals, more ostriches, dozens of white storks in the trees, and a black-chested snake eagle. The scope and variety never ceased to amaze us.

Safari Night 3: You may have heard about sleeping in a tent while on safari, and these next two nights gave us that opportunity. The Matembezi Classic Camp in the Serengeti is somewhat mobile—they do move the location in order to follow migration patterns—but nothing like any tent camping we had ever done before. We had our own tent with a king-sized bed, sink, shower and toilet, and the guys would come and pour hot water in our shower tank early in the morning, so we could get a hot shower. The dining tent contained table linens and china, and we had a gourmet dinner from the camp’s chef. We were completely spoiled as we sat outside and watched the Serengeti get dark. They escorted us to and from our tents, as you could never be sure which animals would show up at night.

Safari Day 4: We got to spend all day roaming the Serengeti, and it was so much fun. The word “Serengeti” means “the place where the land runs on forever,” and that is exactly what this wide-open space feels like! More than 2500 lions and 1 million wildebeest roam the Serengeti plains! Grant’s gazelles, hyenas, wildebeest, impala, and zebras were everywhere as we drove around!

We watched a lion pride sleep under a tree, including some cubs.

The highlight of the day was spotting a leopard cub up in a tree (Number 5 of the African Big 5!). Mother leopards will leave the cubs in a tree with some meat to snack on (probably a gazelle) and then go off and hide in another tree a short distance away. They can keep an eye on baby leopard, just to make sure it’s doing what it’s supposed to do—staying in the tree— while Mom takes a nap in the heat of the day.

The guineafowl underneath the leopard cub also kept us entertained. A few more critters rounded out our last full day in Serengeti, including topi, hartebeest, and dik-dik (more antelope), a black-backed jackal, a hyrax, and a red-headed agama lizard.

More birds included a martial eagle (juvenile), tawny eagles, and a secretary bird (conflicting stories on how it got its name), which is 4 feet tall with a wingspan of 6-7 feet!

We have heard it said that Yellowstone National Park is America’s Serengeti. We love Yellowstone, but it does not begin to compare with the Serengeti in variety or quantity of animals. This was a magical place, and we were sad to say good-bye to the amazing staff and the wonders of the Serengeti.

Safari Day 5: Next morning, we left the Serengeti classic camp, watched spotted hyenas and lappet-faced vultures fight over a kill, and then drove into the Ngorongoro Crater for our last big day. The crater, actually a collapsed caldera from an extinct volcano, is 2000 feet deep and 100 square miles in area.

Several zebra calves, warthogs, wildebeest, Grant’s gazelles, Thomson’s gazelles, and waterbuck (another antelope!) lounged on the floor of the crater. 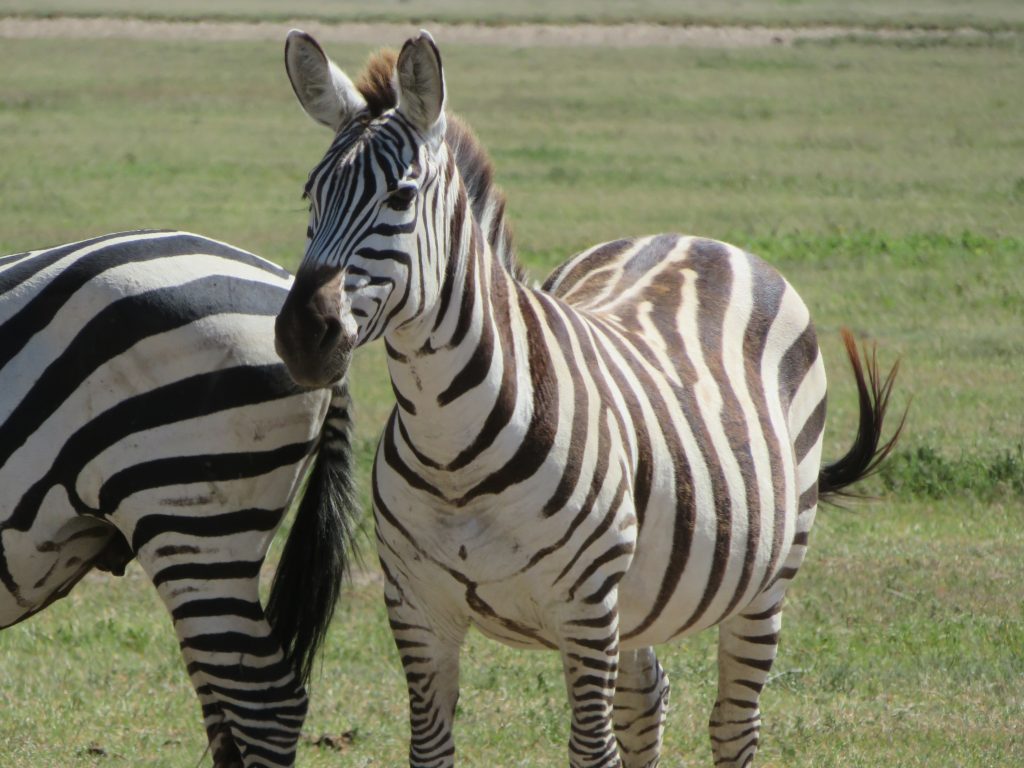 But we weren’t done yet. We watched two pairs of mating lions. 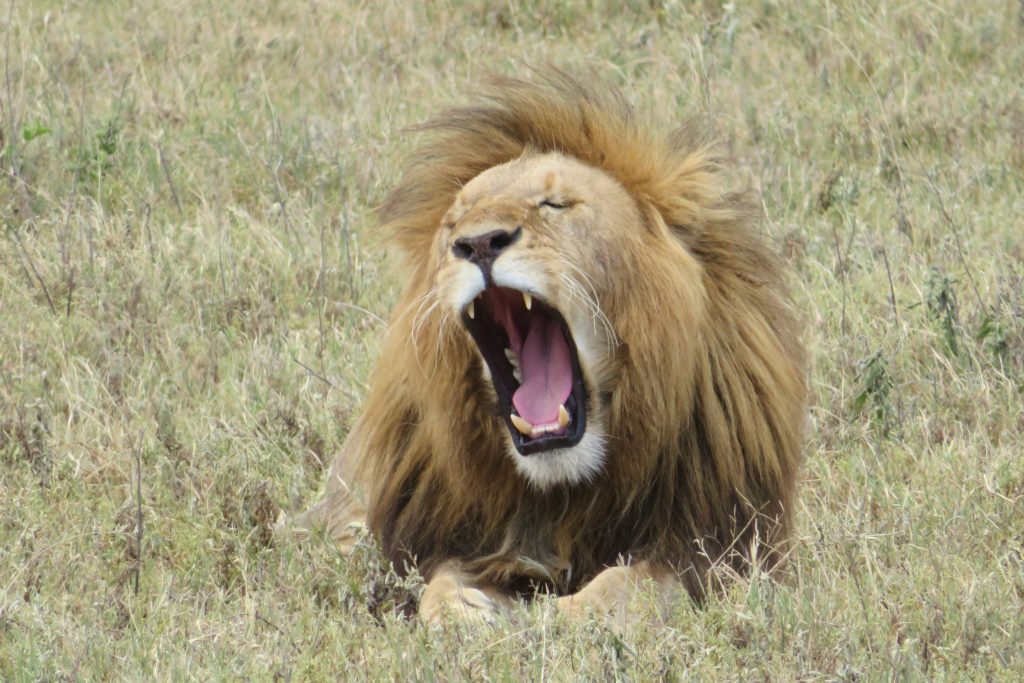 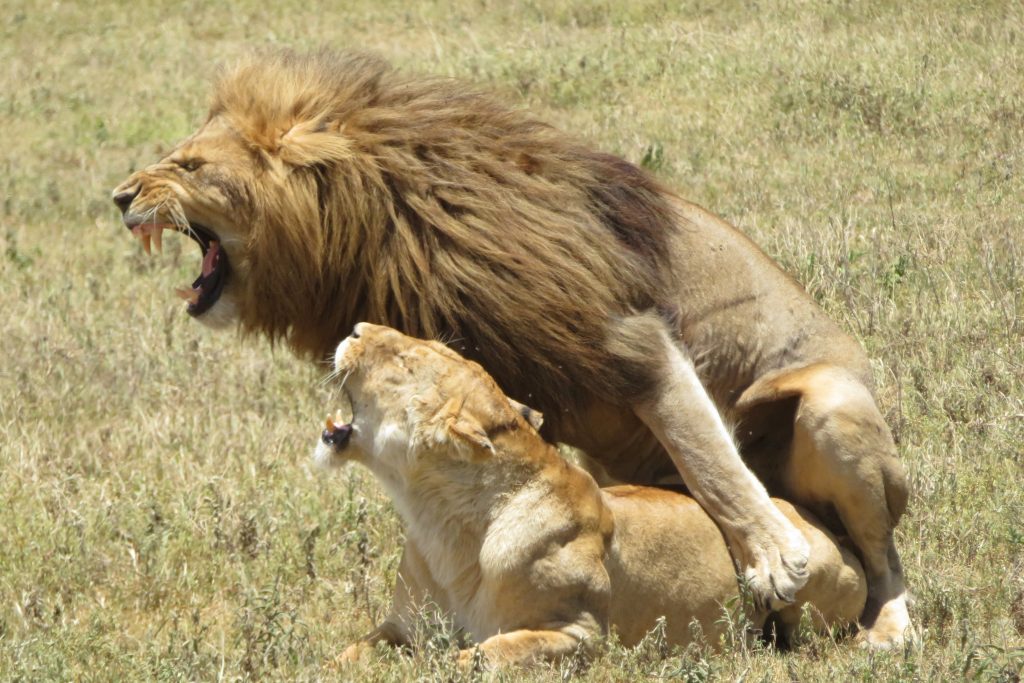 The crater gets water from a large spring, where hippopotamuses hang out in the swampy pond. We watched them roll around on top of each other in the water—absolutely fascinating! 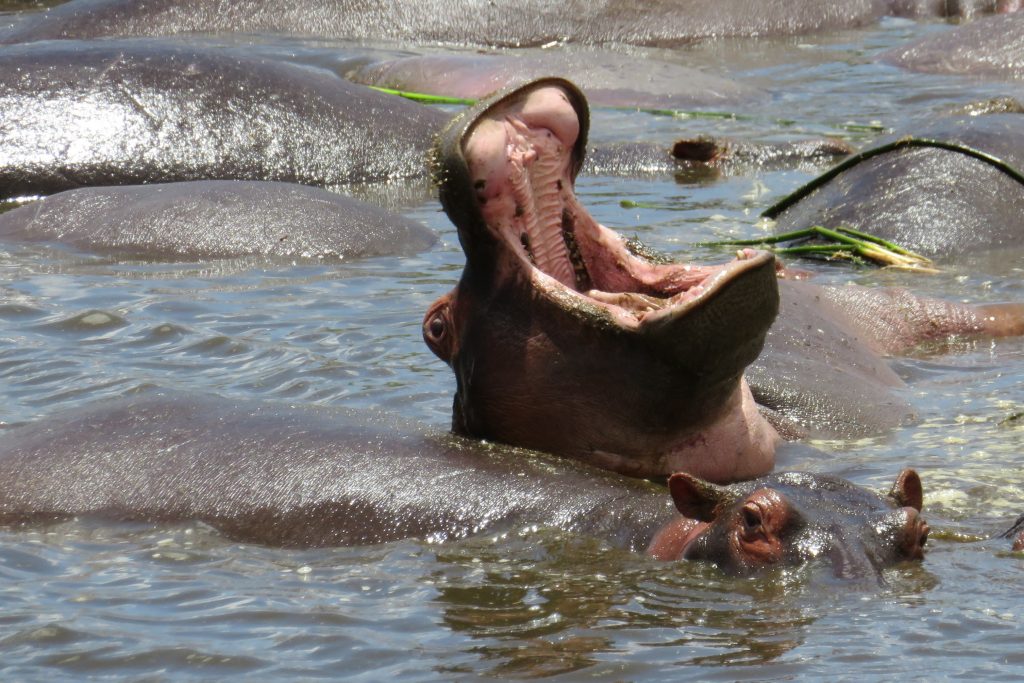 We saw a couple more black rhinos, but too far away to get good pictures in the sun. Baboons and vervet monkeys were back! Ostriches, Egyptian geese, grey-crowned cranes and great white pelicans rounded out our day.

As with the Serengeti, the Ngorongoro Crater definitely lived up to the hype. We returned to Country Lodge for the night and the next day flew to Zanzibar for diving (next blog post). I would go back to do another African safari in a second, if we ever get past this virus. If you get a chance, don’t hesitate. It’s worth every penny!

6 thoughts on “African Safari in Tanzania”