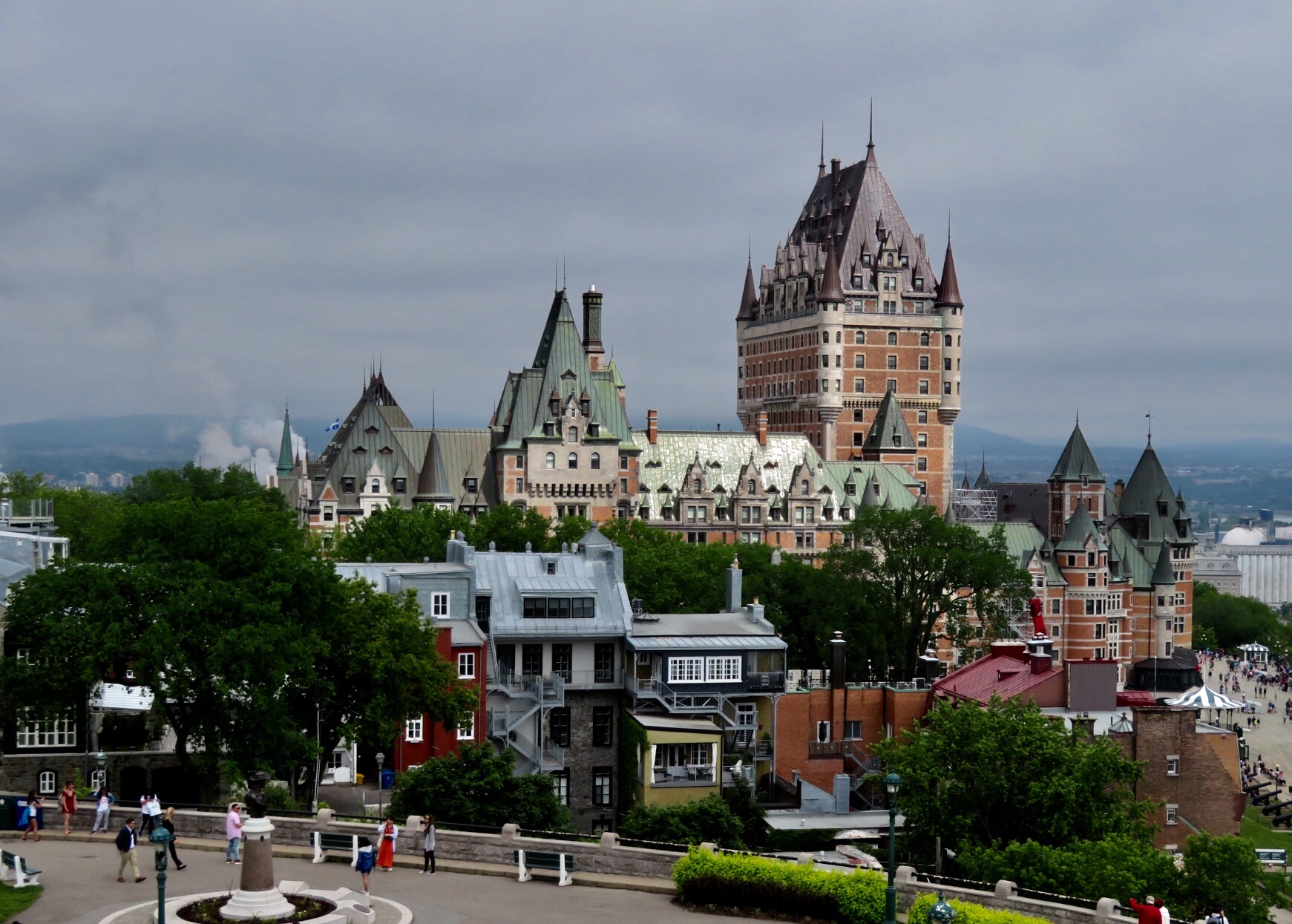 When friends and family heard that we were visiting Eastern Canada, every single person said, “Be sure to visit Québec City. It’s the best!” And they were right.

Québec City is one of the oldest European settlements in North America, and the second oldest in Canada. Explorer Samuel de Champlain (remember him from 5th grade social studies?) founded a French settlement on this site in 1608. He adopted the name that the Algonquin natives gave to the area, Kébec, meaning “where the river narrows.” This is indeed a narrow part of the huge St. Lawrence River, and therefore it is more defensible, making it a good choice for an early settlement.

We didn’t try to see it all, but we concentrated on the old city (Vieux-Québec), renowned for its fortified stone walls, upper and lower towns, its status as a UNESCO World Heritage Site, and the Citadelle, its main defensive structure in the 19th century.

But before we explored the city, we first had to pick up our travel buddies for this leg of our trip. Richard and Marilynn have been our dive buddies for four years, ever since we met on a dive trip in Bali. Turns out they live just a few miles from us and they’re always willing to explore a new place. So they flew up here and spent over a week touring (and eating!) with us. 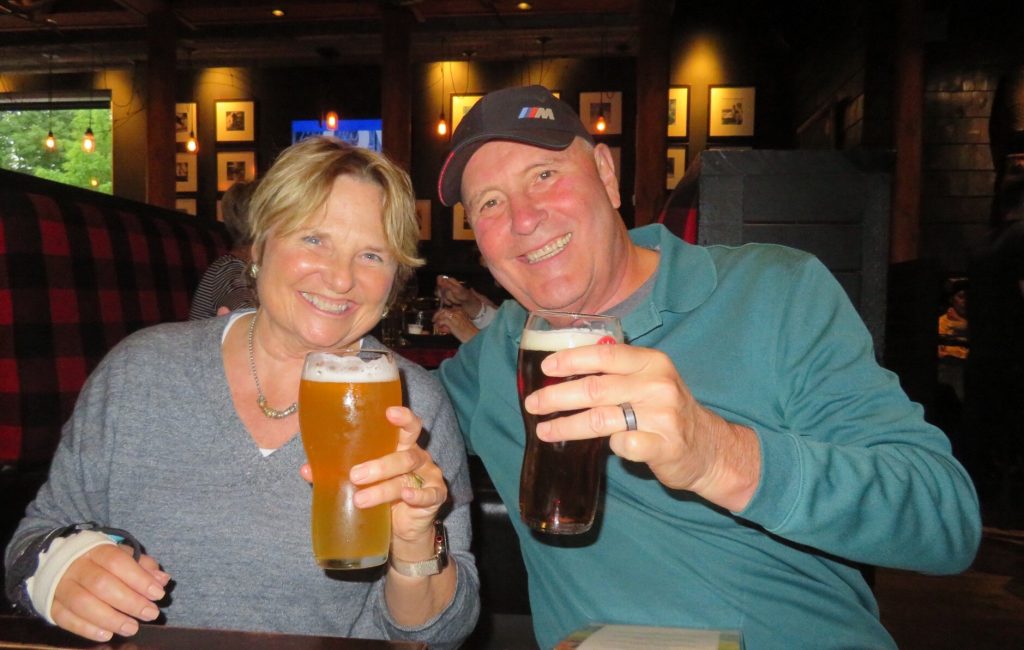 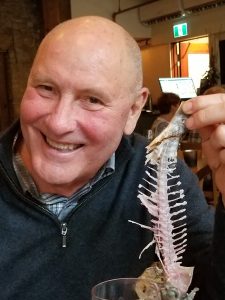 We’ve decided that the way to see a new city, particularly an historic section that is geographically bounded, is to participate in a guided walking tour. We had an excellent tour of Old Québec (given by Geneviéve from toursvieuxquebec.com).

Highlights of the Upper Town:
• Ursulines Convent (read the historical fiction by Aimie K. Runyan to learn about the Ursulines and the single women they prepared to become wives and mothers, Promised to the Crown, and Duty to the Crown)
• Québec City Hall (Hotel de Ville)
• Chateau Frontenac
• A mix of architectural styles—French, British, Canadian
• Notre-Dame of Quebec Basilica-Cathedral
• Cathedral of the Holy Trinity Anglican Church
• A really old wall!

Highlights of the Lower Town:
• Notre-Dame-des-Victoires, a church constructed on the site of Champlain’s original trading post
• Place Royale with its cobblestone streets, quirky shops and restaurants (rabbit is on the menu everywhere!)
• A funicular (45 degree angled elevator) that takes you back up to the Upper Town
• A really old wall! 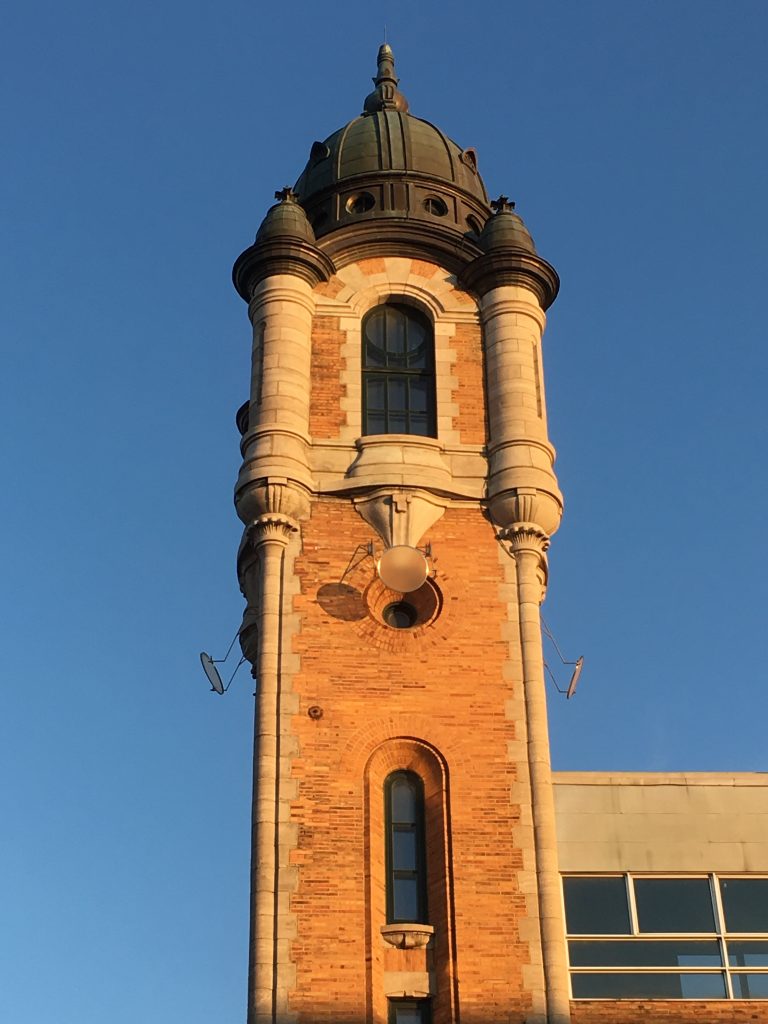 Highlights of the Citadelle of Quebec:
• Great views of the city
• Cool military uniforms
• Imposing architecture
• A lot of fanfare surrounding holidays (we were there on Canada Day) and position (it is the secondary official residence of the Governor General of Canada)
• The only French-speaking regiment of the Canadian Armed Forces (Royal 22nd)
• Learning that this is where Winston Churchill and Franklin Roosevelt resided while discussing WW II strategies in 1943 and 1944.
• A really old wall! 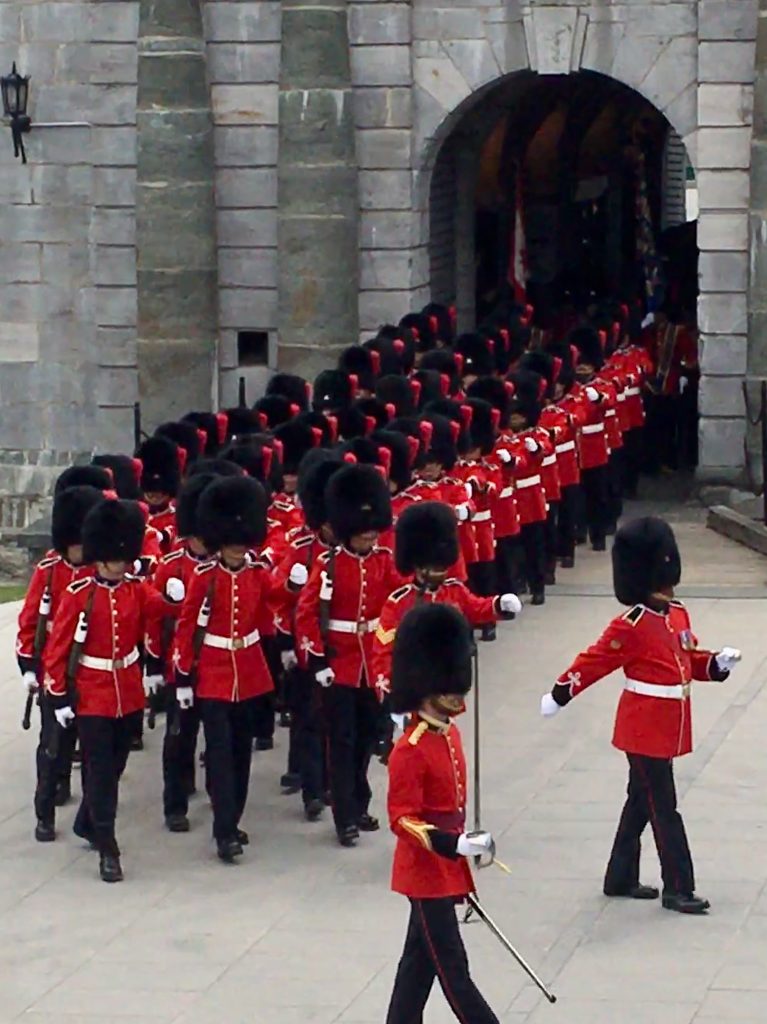 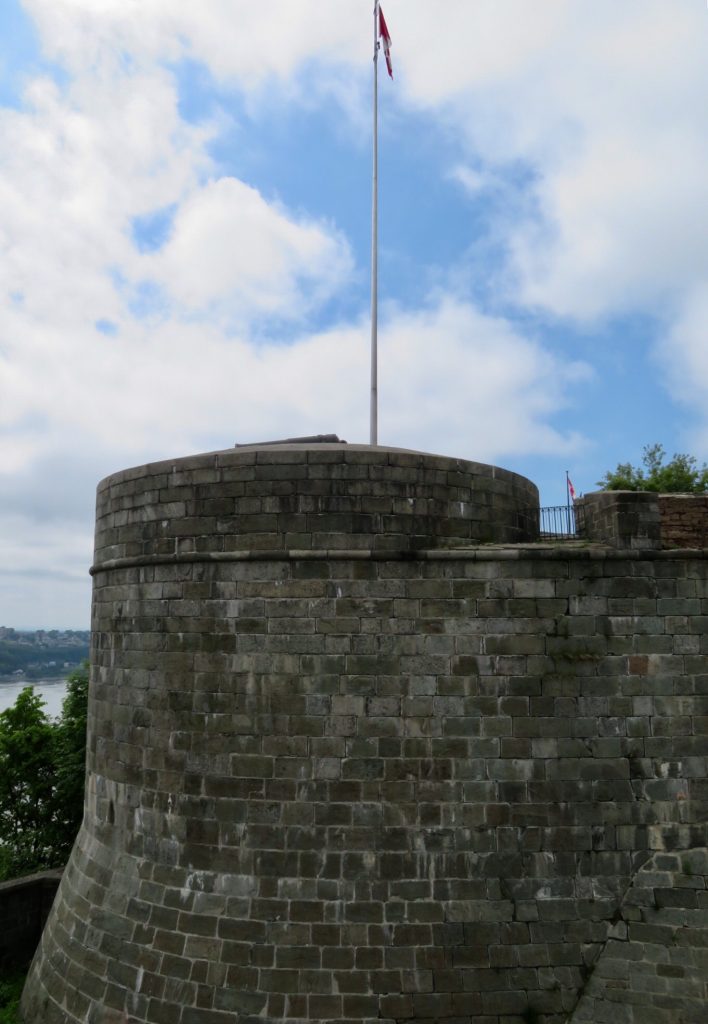 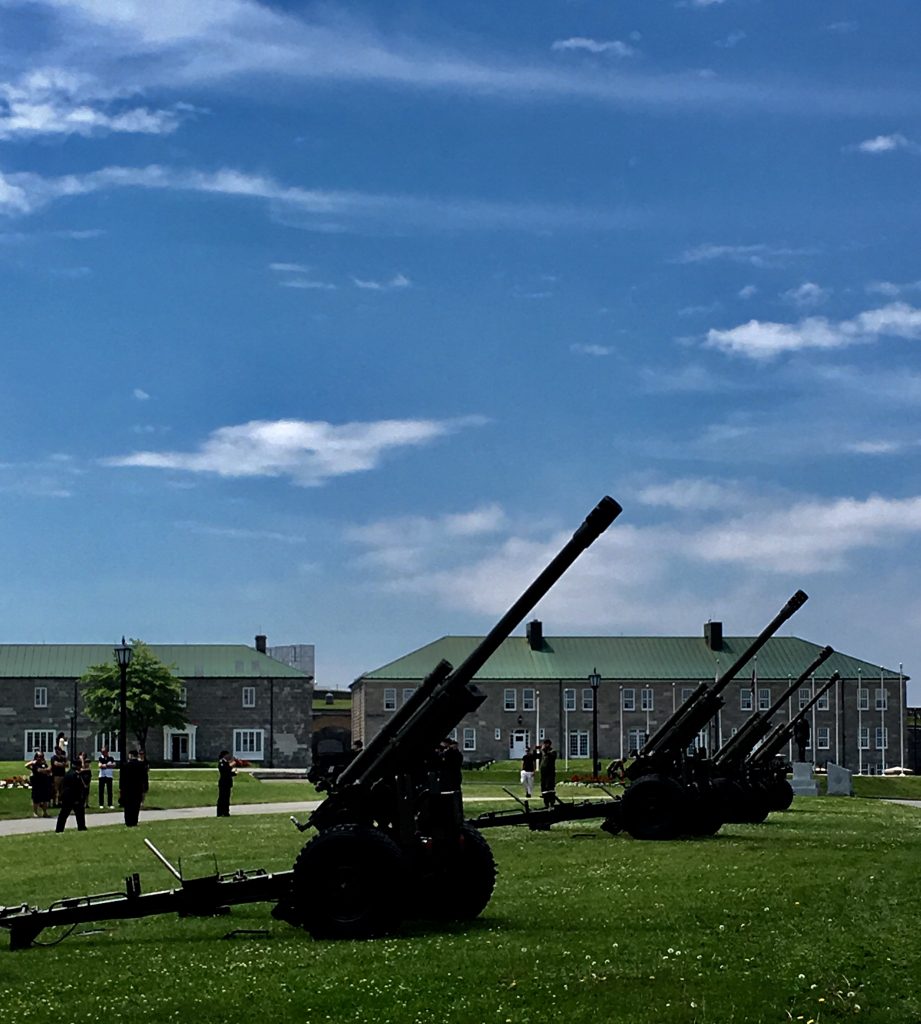 We also took a boat tour out on the St. Lawrence River, in order to see some sights a little further from town. This was a great way to view Chateau Frontenac, reputedly the most photographed hotel in the world (though how would you know?). 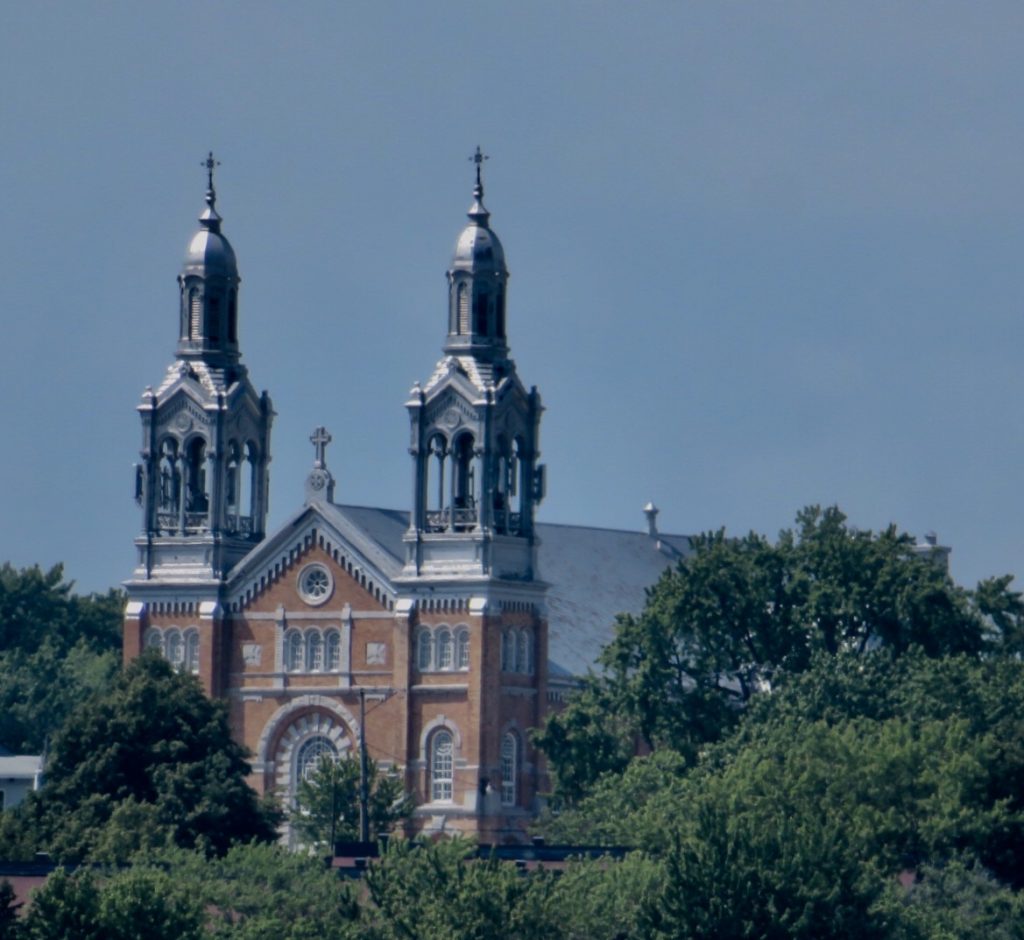 Moving on from Québec City after a couple of days, we headed to the Trois-Rivières area, so we could visit La Mauricie National Park in the Laurentian Mountains. 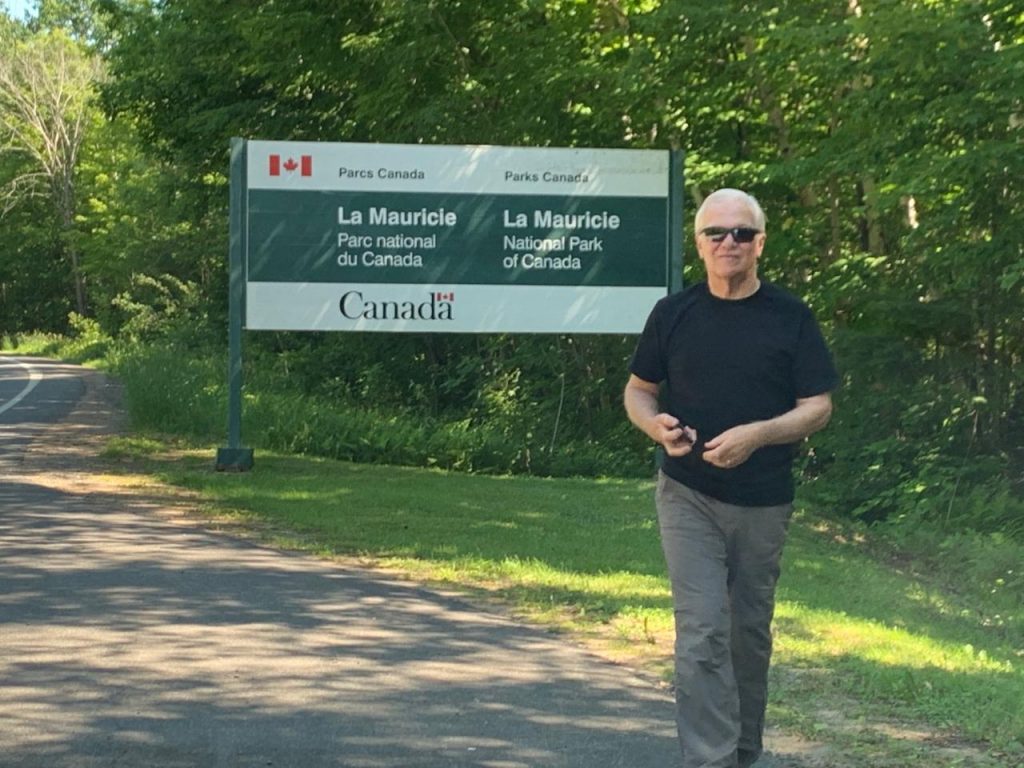 Of course, we went in search of wildlife, especially moose. We didn’t see any moose, but we had a beautiful scenic drive and some wonderful short hikes. 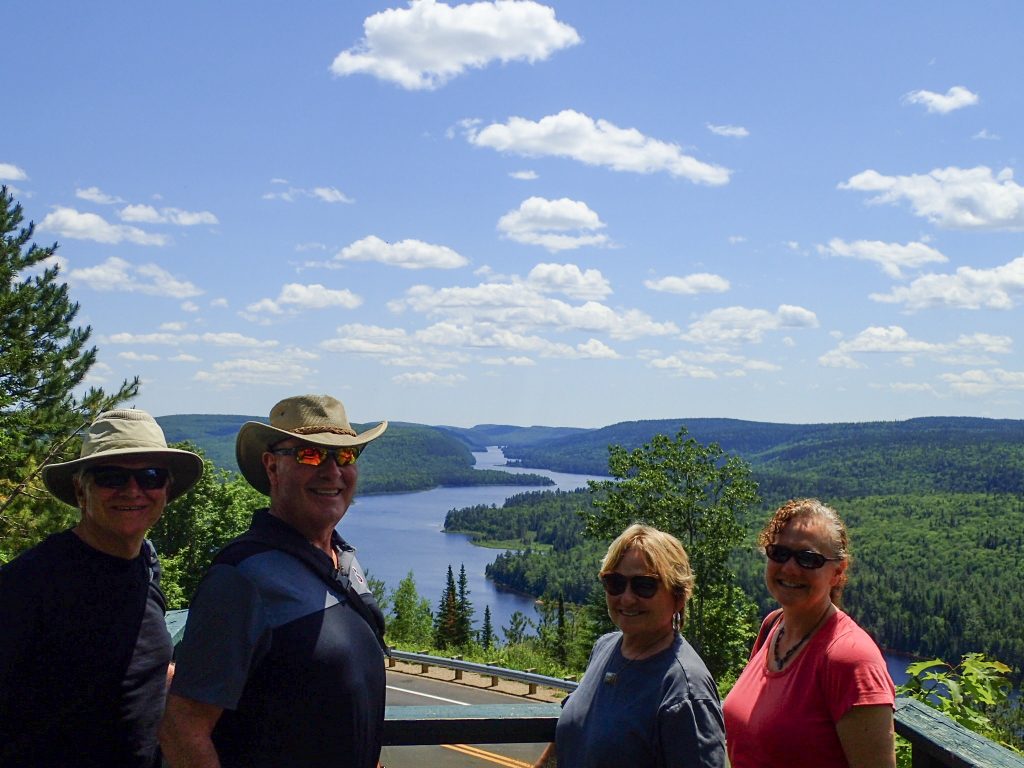 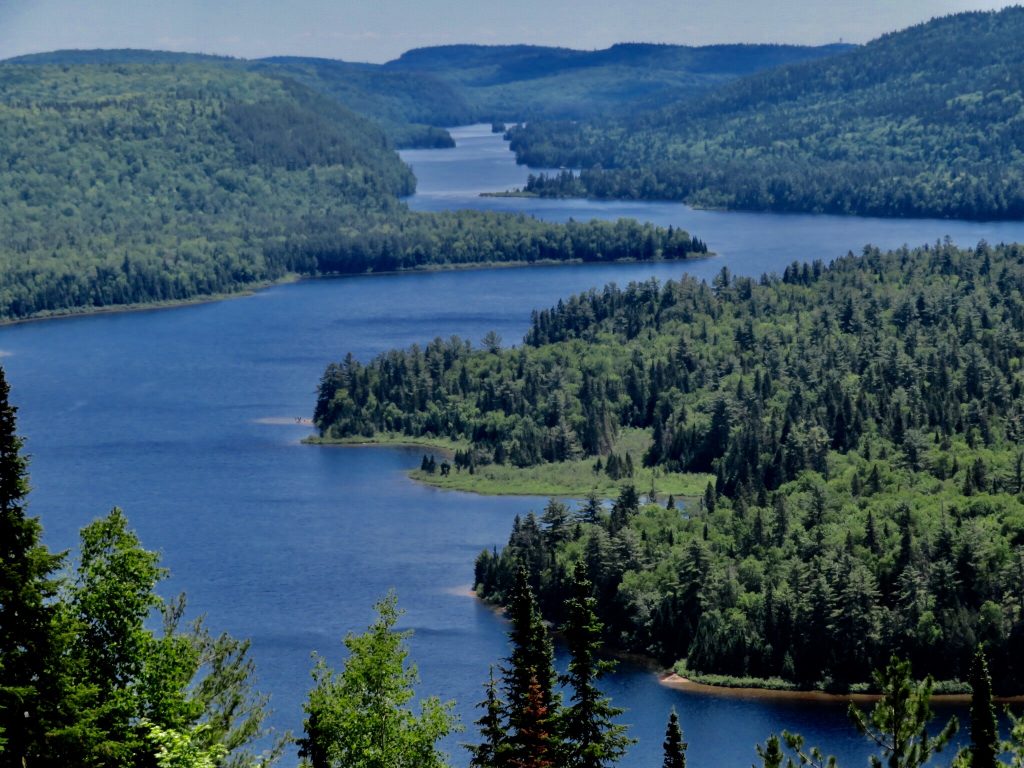 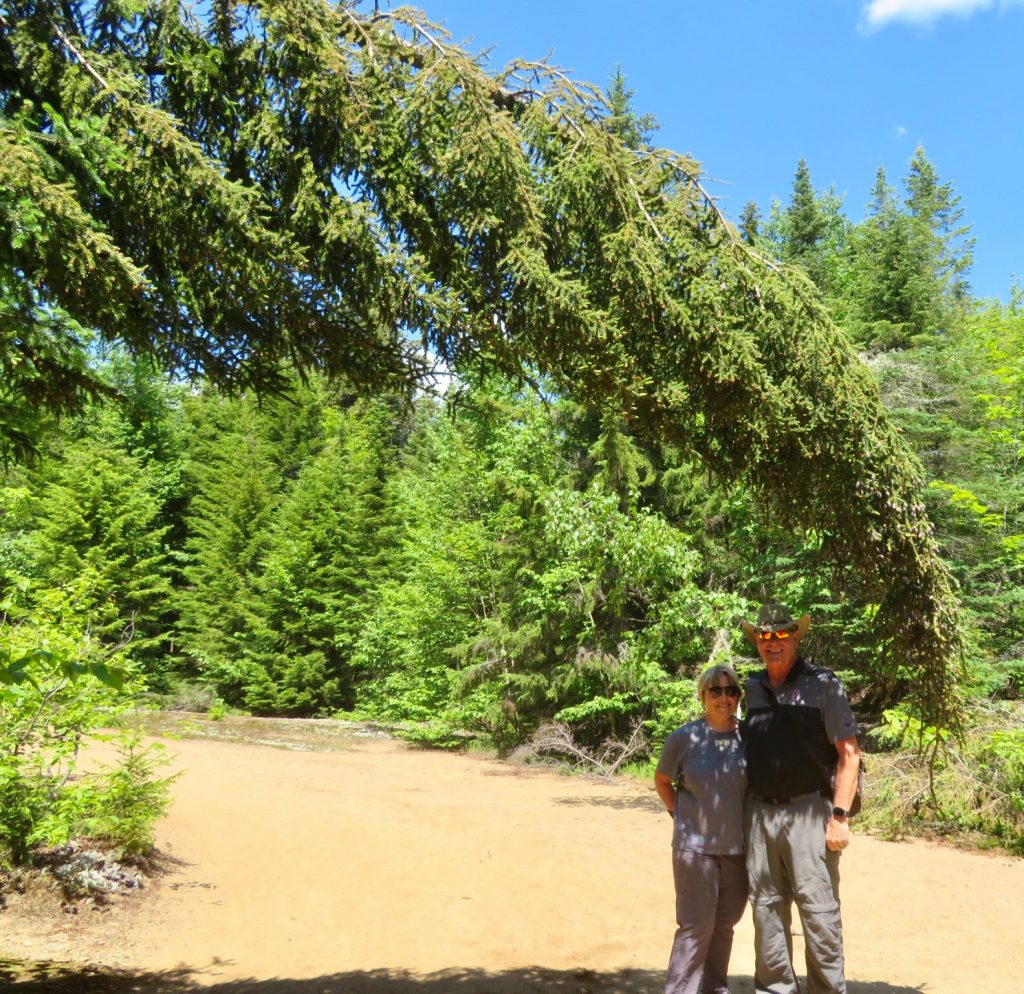 The butterflies were having a convention all over the park! 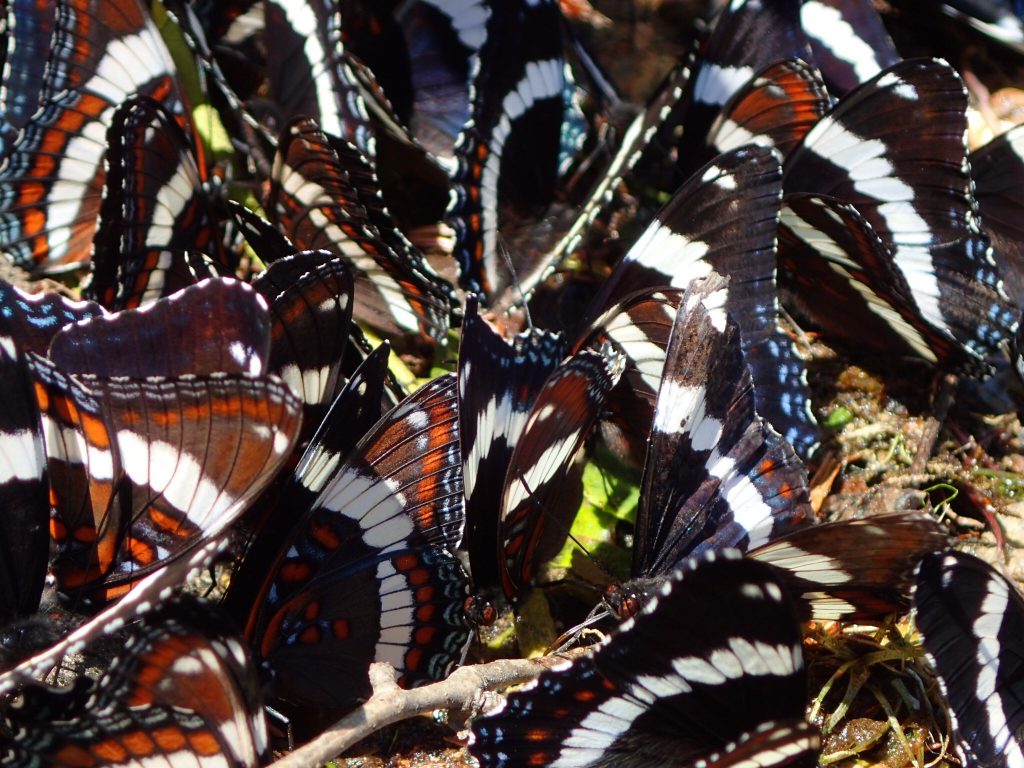 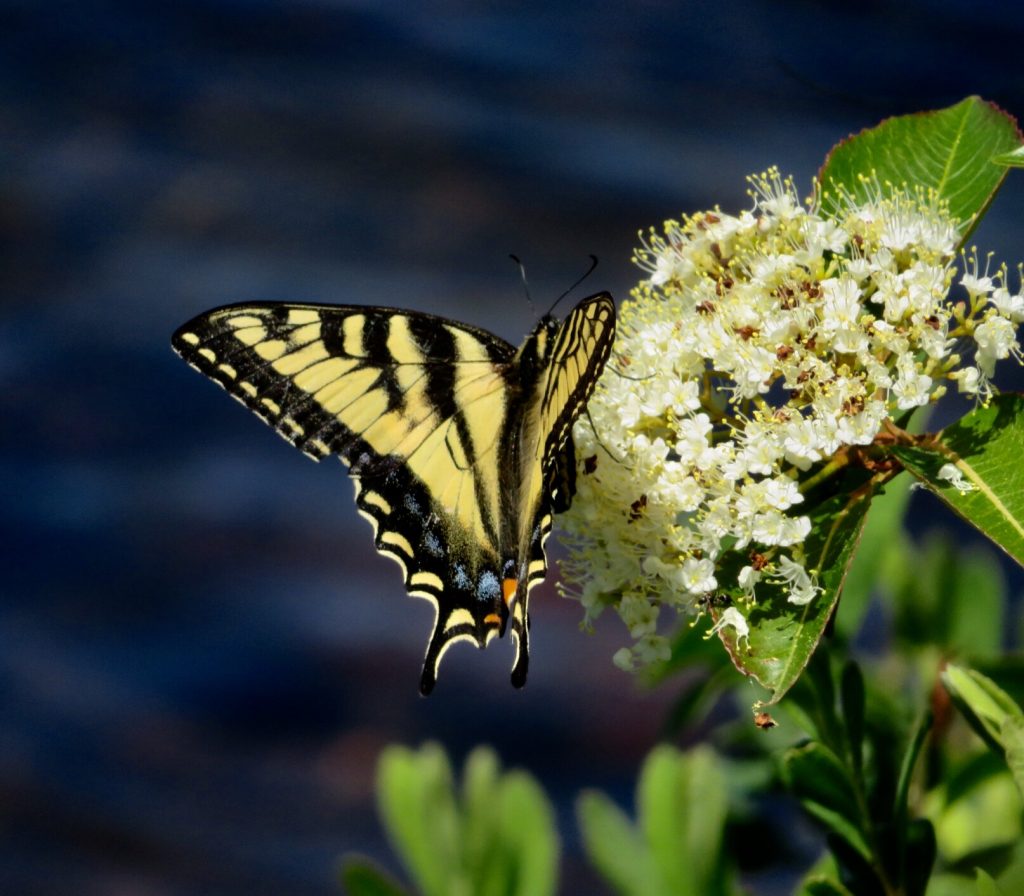 Wildlife we saw mainly resided on or in the water—loons (what a cool bird) and tadpoles becoming frogs.

We had an adventure of a different kind when we tried to leave our campground the next day and discovered we had a flat tire on the RV. This is no easy problem to solve—no spare, for one thing—but we had many people help us. Between our very limited French and their somewhat limited English, we eventually arranged to have a company come out and help us, but they couldn’t come until 1:30. So we sat under the trees on a very hot day and waited for help. Whoever said the people of Québec were unfriendly has not been to Nicolet and Port St. François. These people were amazingly gracious and helpful. 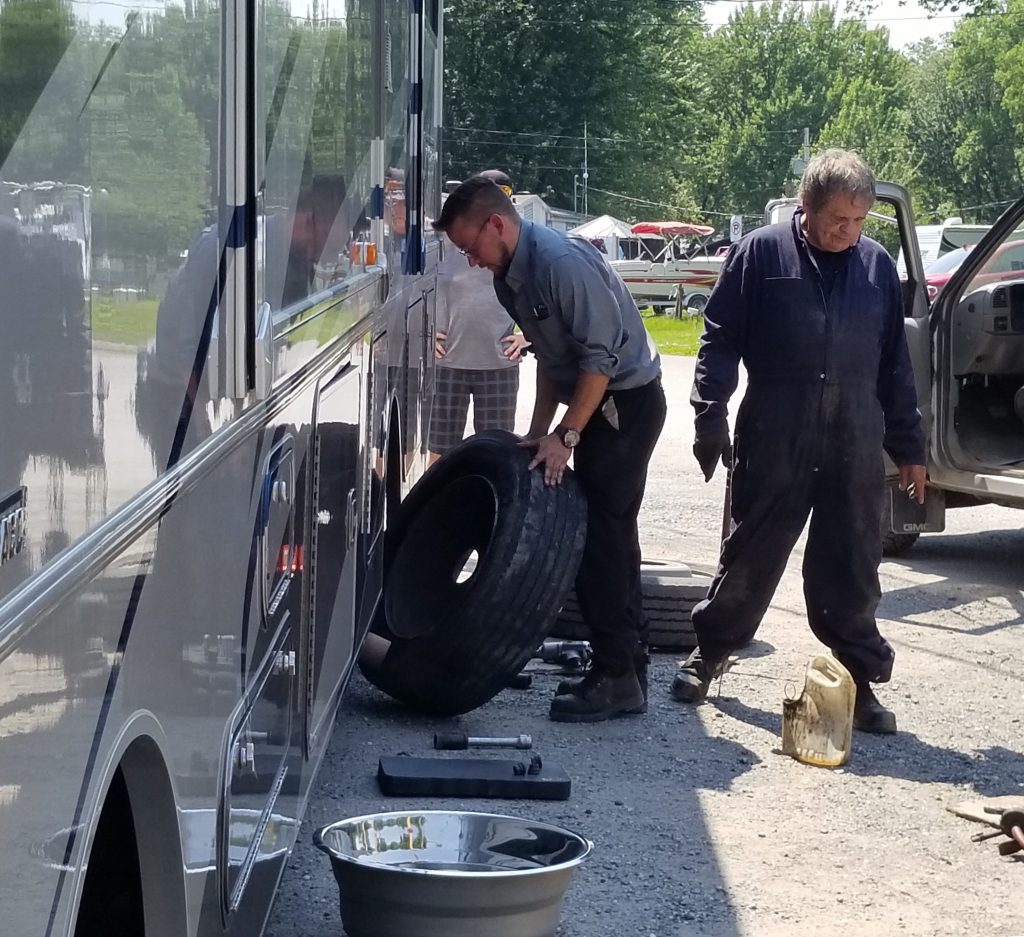 The tire got repaired and by 3:30 we were on the road. Fortunately, it was a short drive to our next campground outside of Montreal, so we made it in time for dinner.

Exploring Montreal took our next couple of days, with two more walking tours (having learned how good they were in Québec City), Old Montreal West and Old Montreal East.

Both tours start at the Notre-Dame Basilica, which is impressive on the outside and glorious on the inside. 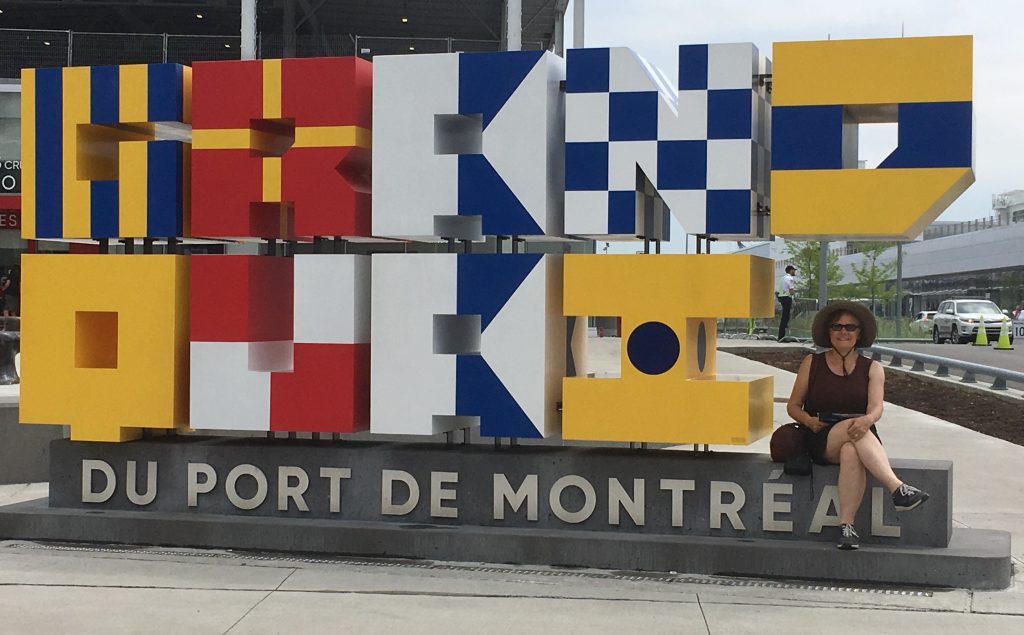 We learned of the Basilica’s history, architecture, famous people who have been married there (e.g., Celine Dion), and why a huge French Catholic church was built after British rule began in Montreal and the rest of Canada (it’s all about politics, power and money, what a surprise).

We also learned about the founding settlers of Montreal, who came to establish a Roman Catholic mission and hospital.

Seeing the variety of architectural styles and English/French competitive structures was informative and fun. 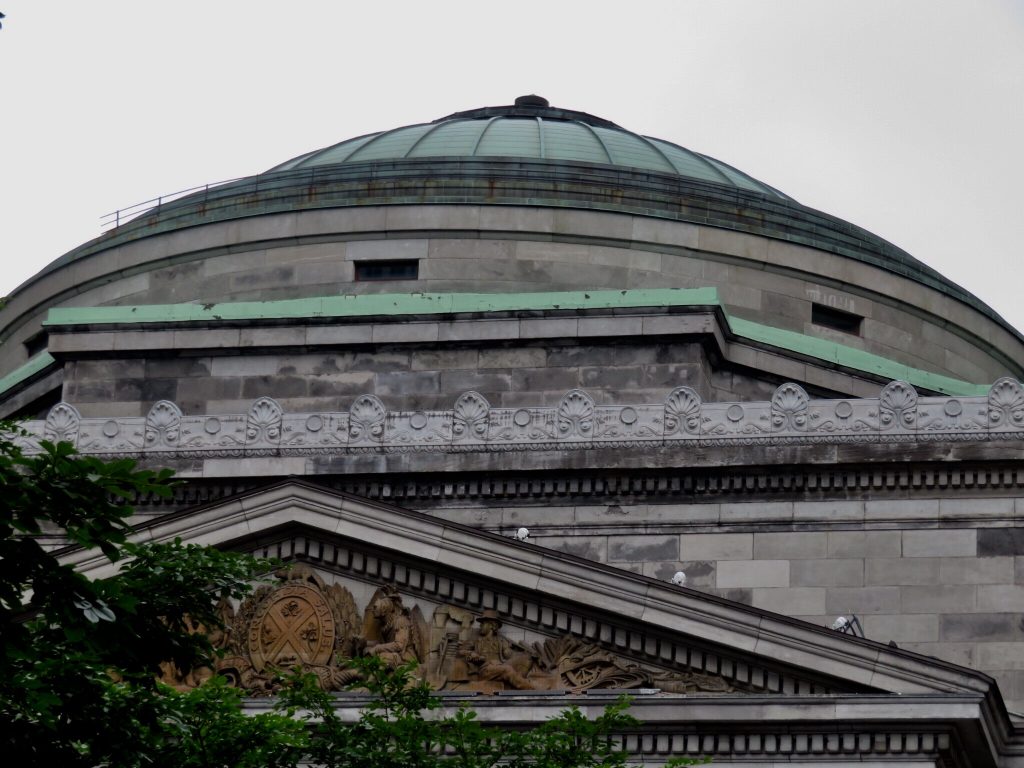 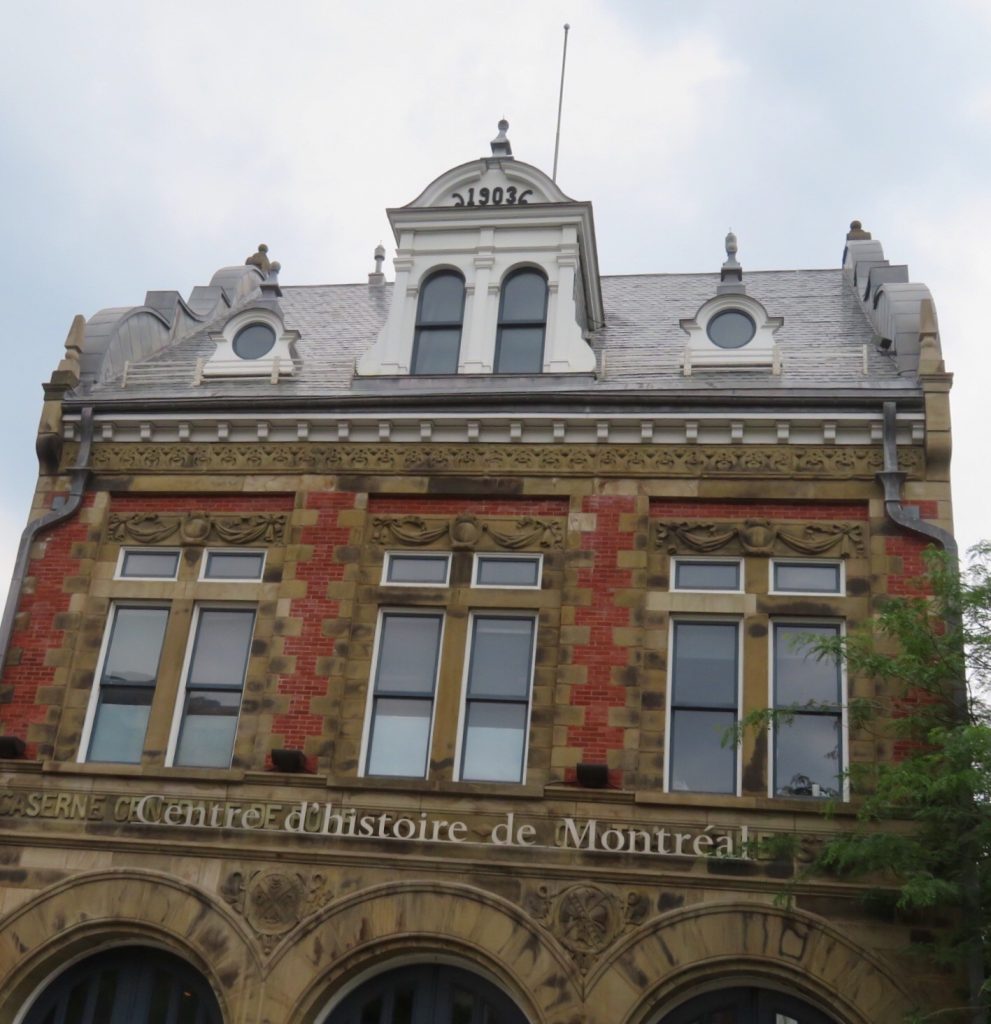 We visited Montreal during its annual Jazz Festival, so we got to hear some open-air concerts and also went to hear Peter Frampton at one of the big performance halls. He’s not as skinny and cute as he used to be, but he’s a very talented musician and sang lots of fan favorites. 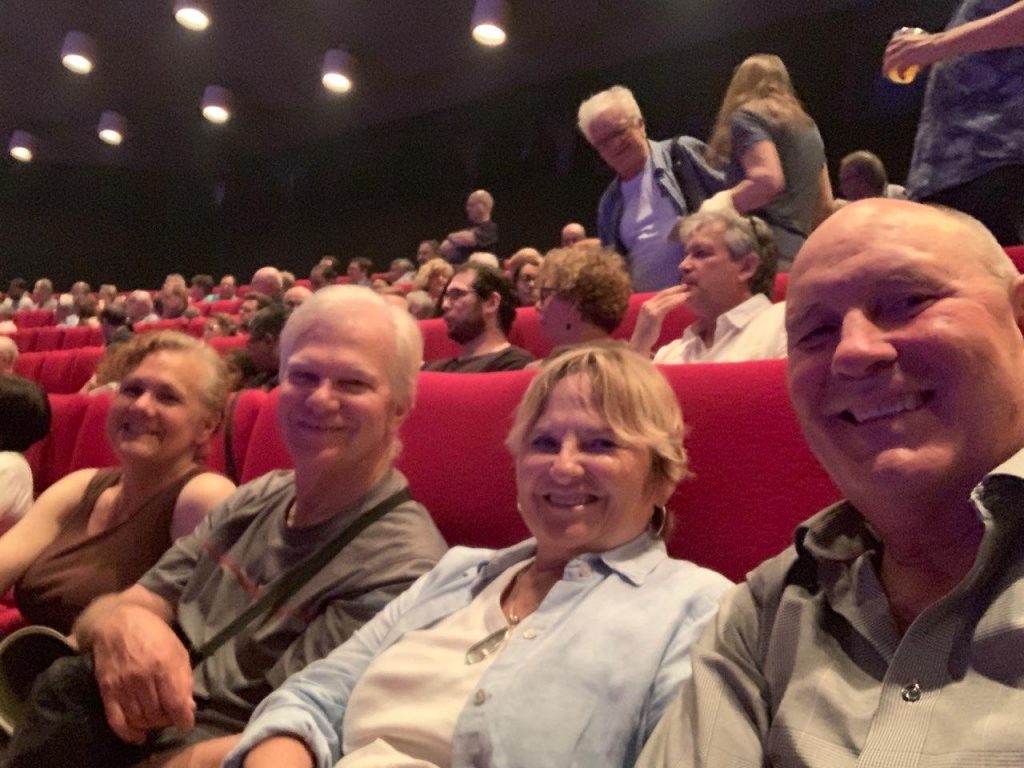 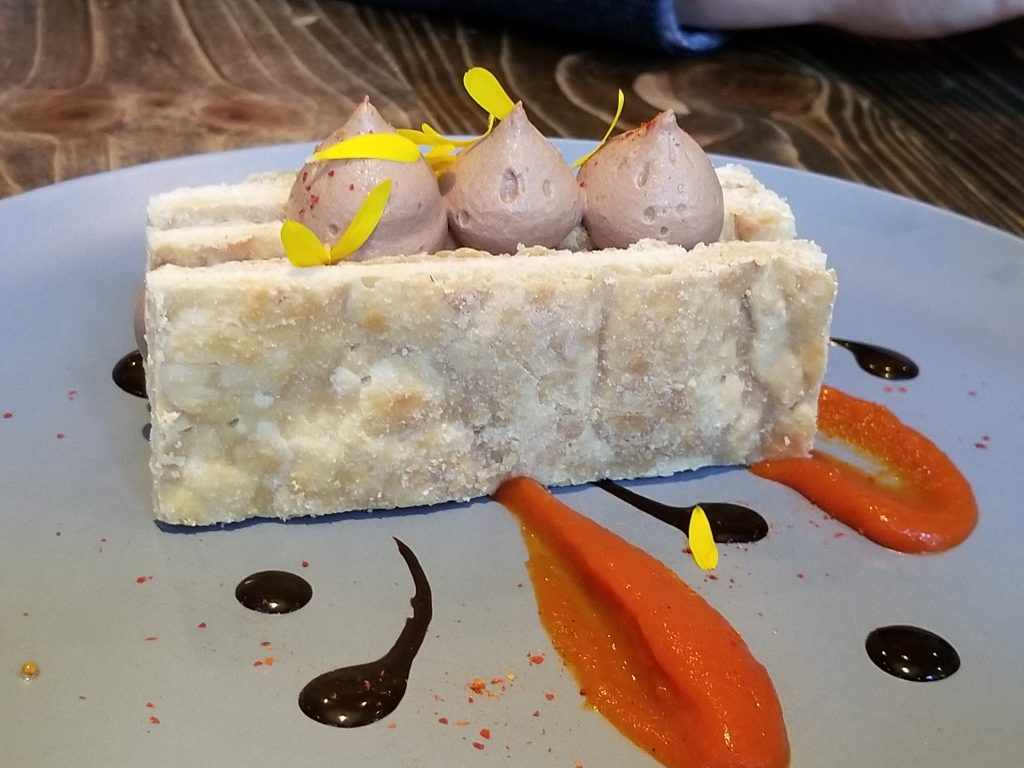 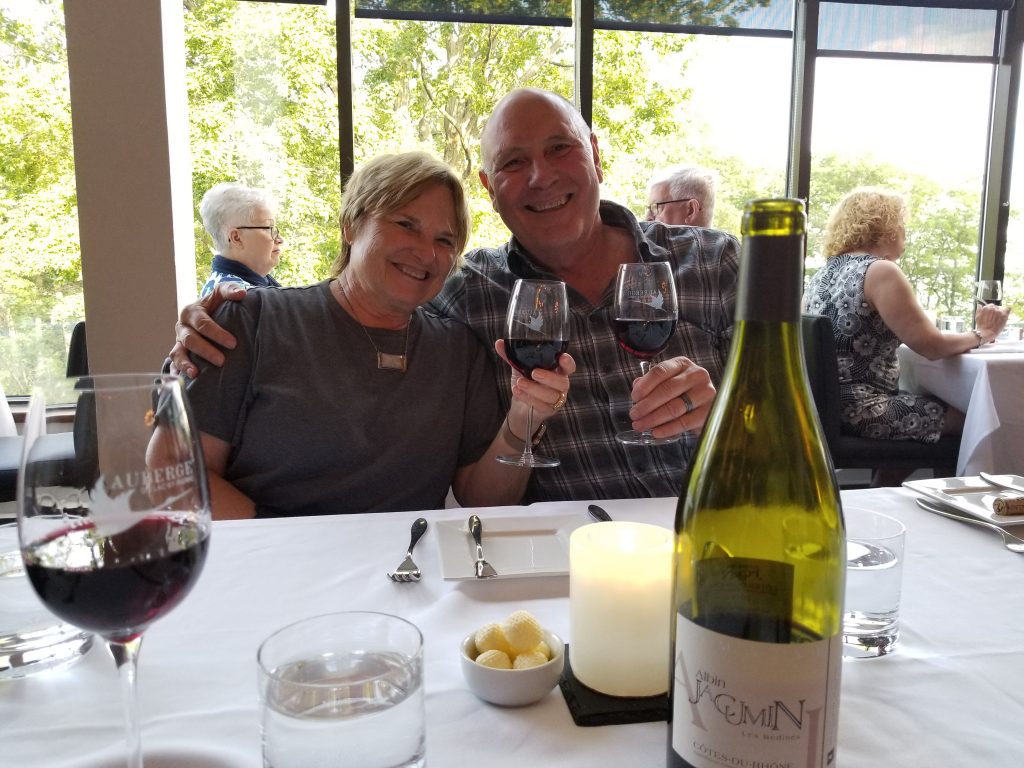 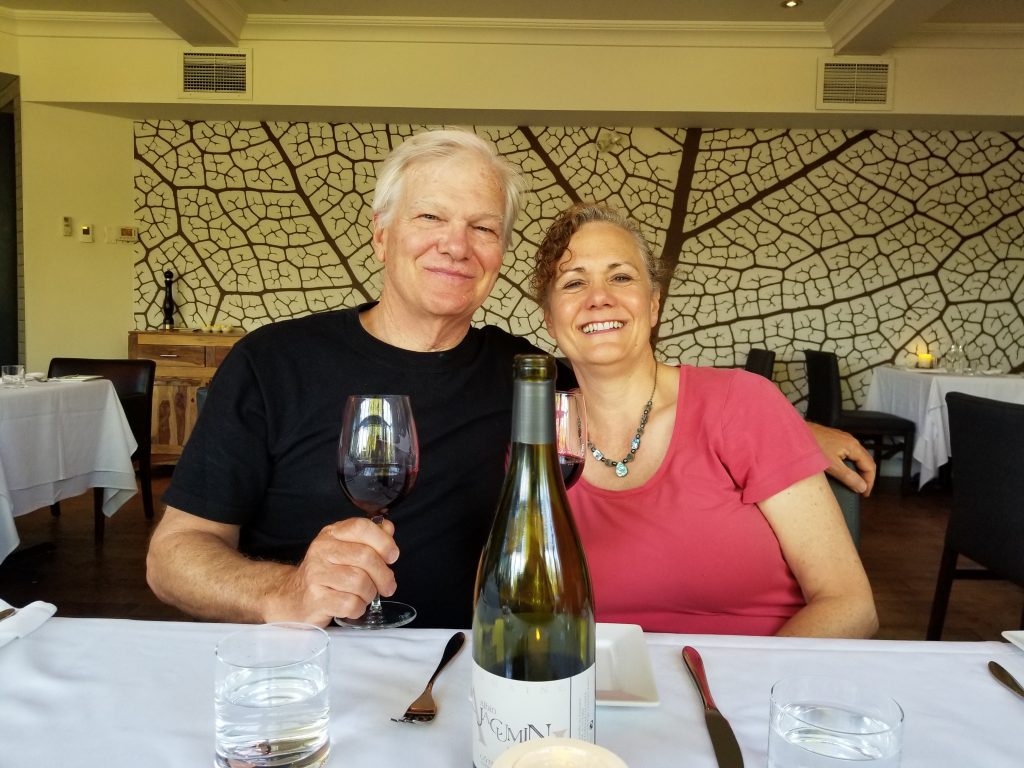 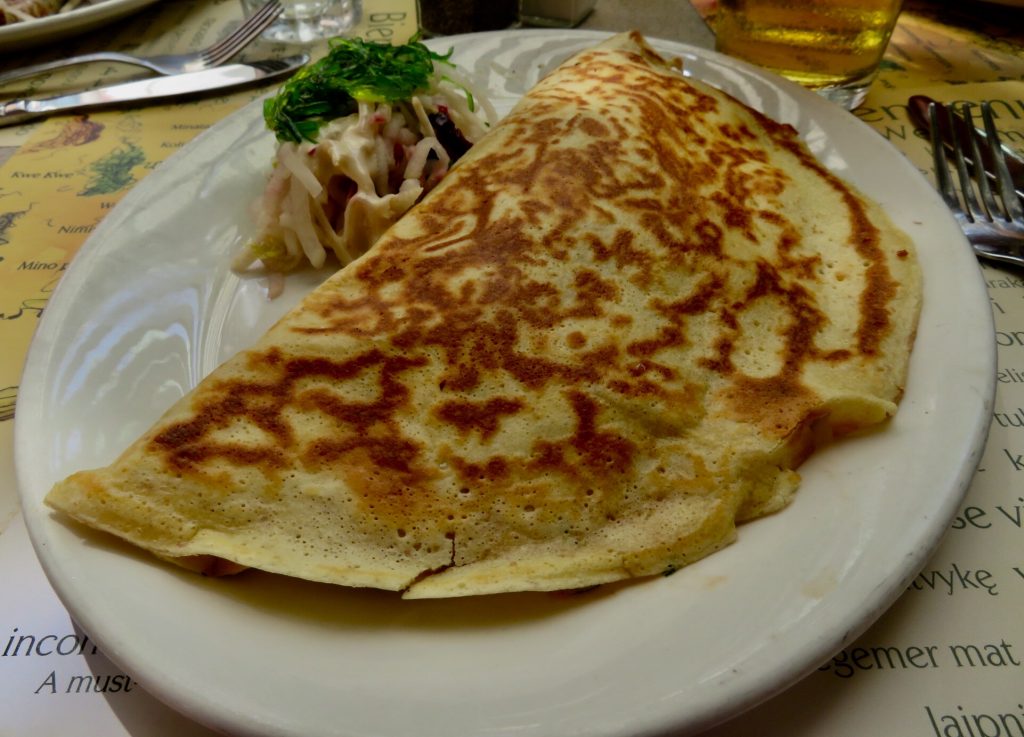