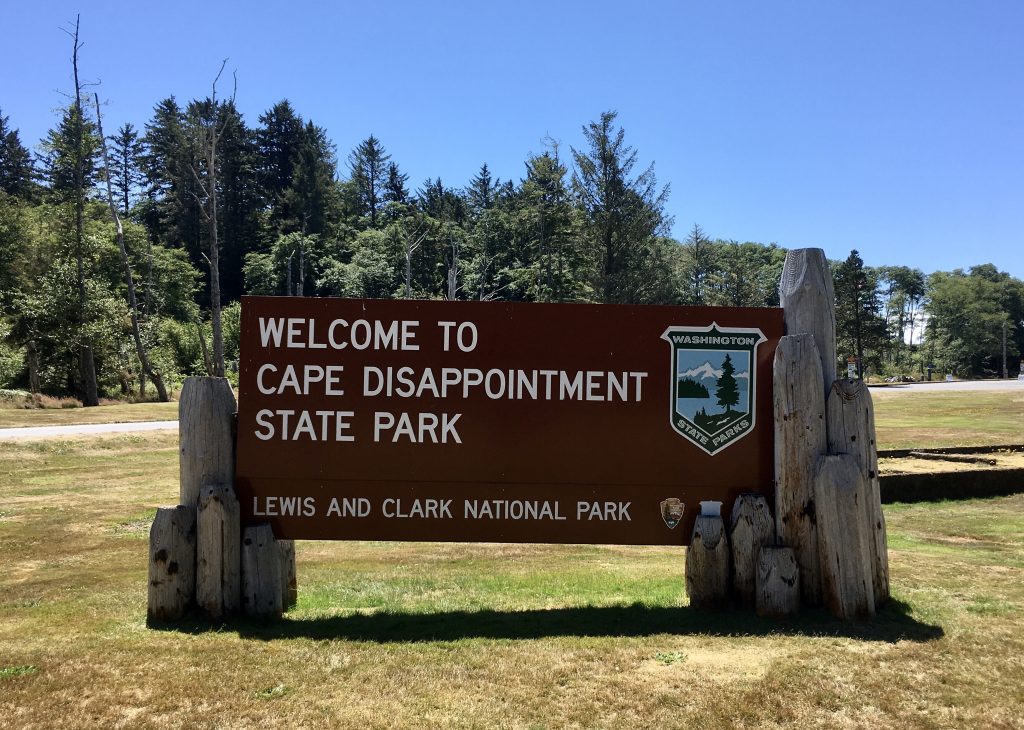 After a few delightful days on the Oregon Coast, we continued our West Coast/Rocky Mountain RV trip by crossing the Columbia River in Astoria, Oregon, and heading west to Cape Disappointment State Park in Washington state.

You might think (as we previously did) that Cape Disappointment was named by Lewis and Clark when they finally got to the Pacific Ocean, because it confirmed that there was no Northwest Passage from the Atlantic to the Pacific. In fact, Cape Disappointment was named 17 years before the Corps of Discovery showed up in 1805. In 1788, an ethically-challenged British ship captain and fur trader named John Meares (of Cape Meares fame in Oregon) labeled the area “Cape Disappointment” when he mistakenly believed that the mouth of the Columbia River was only a bay.

The Lewis & Clark expedition had a different reason for thinking of this region as Cape Disappointment. They had hoped to make contact with sailors or traders when they finally reached the Pacific Coast (hoping to possibly hitch a ride home), but the traders and sailors had all left before Lewis & Clark arrived on the coast in November 1805. So the Corps of Discovery spent a pretty miserable fall on the Washington side (Dismal Nitch was aptly named) and a miserable winter on the Oregon side before they headed back to St. Louis the way they had come—overland, through the mountains, and then back down the Missouri River. Over the course of several RV trips, we have enjoyed visiting places that Lewis & Clark explored more than 200 years ago, including this spot in Washington.

We found Cape Disappointment to be anything but a disappointment. Located on the Washington side of the Columbia River, this compact state park has a little bit of everything: sandy beaches, wooded and grassy campsites, a Lewis & Clark Interpretive Center (excellent!), two lighthouses, bike-able roads, and hiking trails through old growth forests. 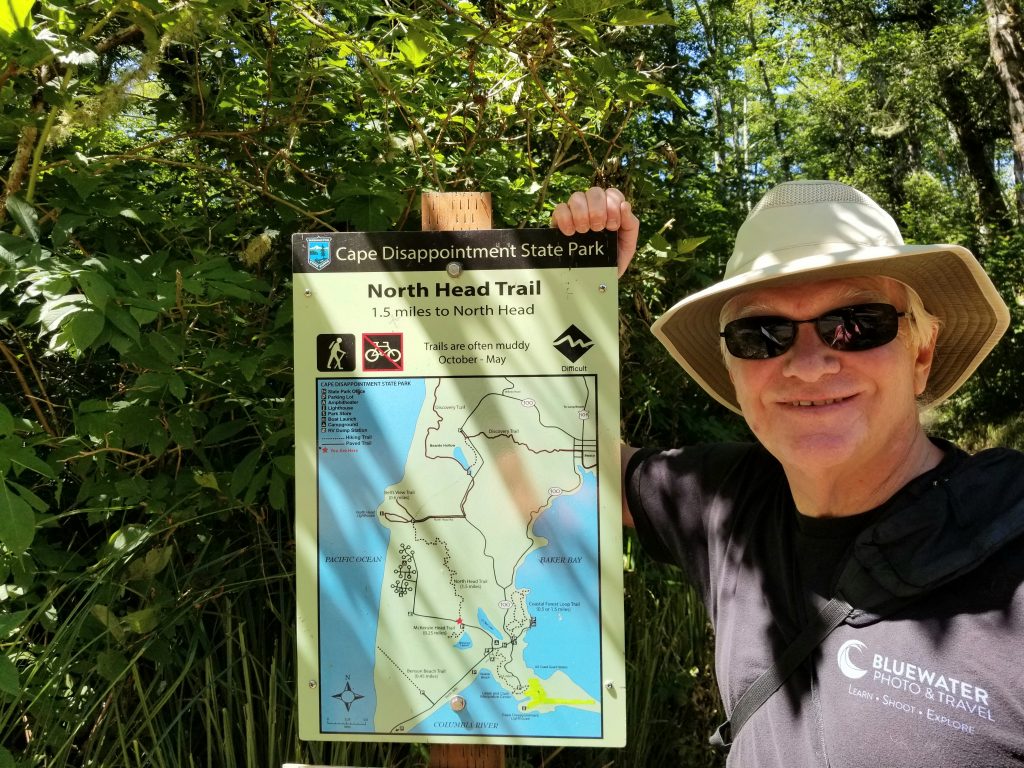 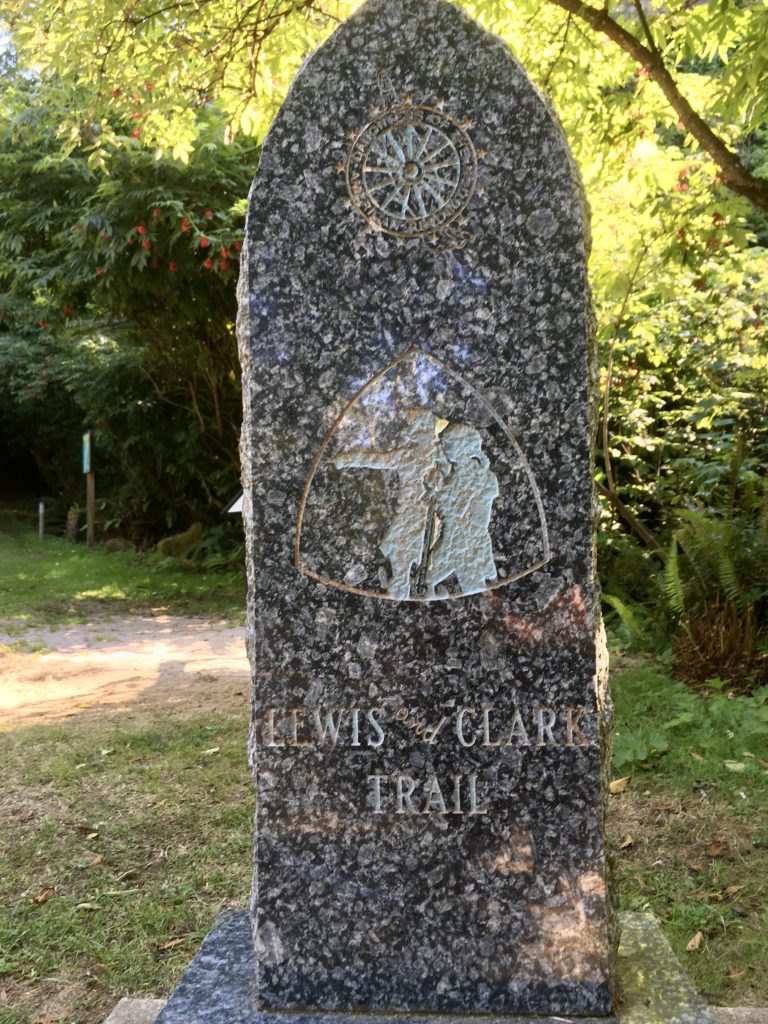 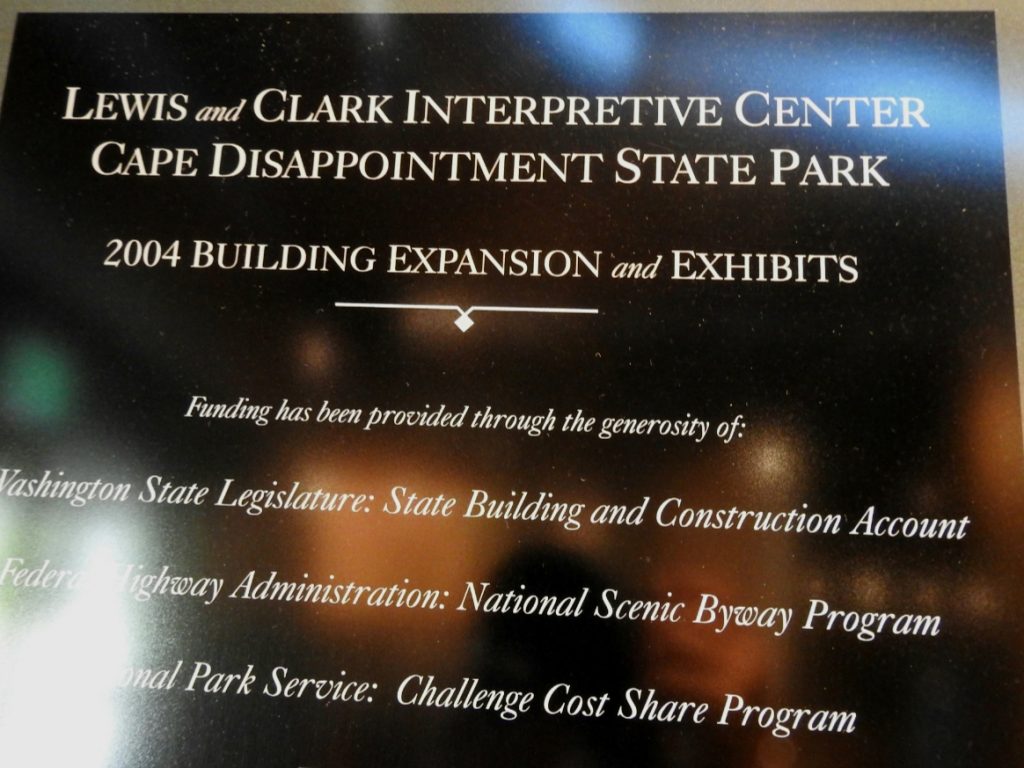 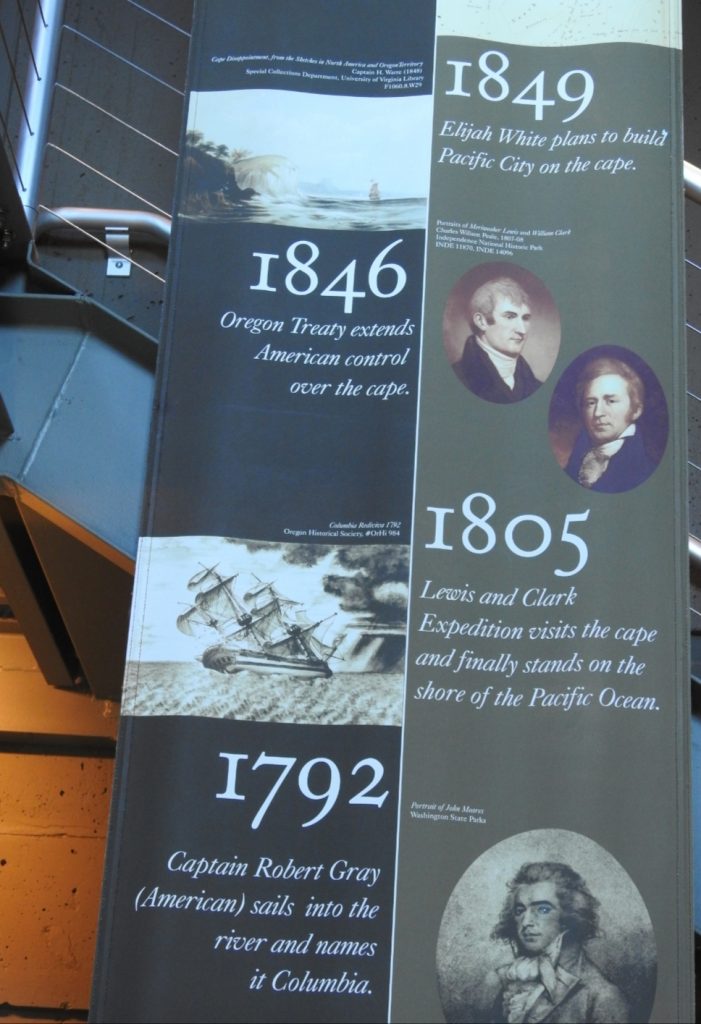 The state park is not far from the popular Long Beach community that boasts the longest beach in the world, but we’re not sure if that’s true or verifiable. Further up the road is Ocean Park, so we thought we had been teleported back to Southern California. These beaches allow vehicles to drive onto the sand (like Oceano Dunes in Pismo Beach, CA) and have helpful boardwalks for walking amongst the sand dunes, but unlike Southern California, the parking is free—wow!

Saying goodbye to the Pacific Coast, we headed northeast to Puget Sound and Harstine Island to hang out for several days at my brother’s “cabin” across from McMicken Island State Park, which was my family’s frequent summer vacation spot when we were children (and as adults). 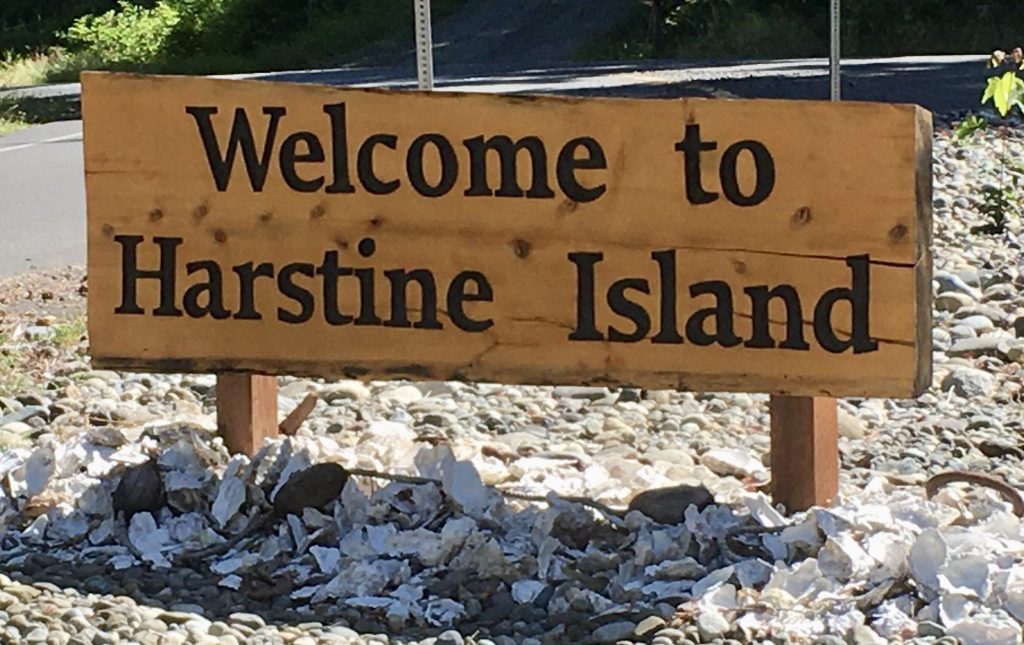 What a great reunion with many family members and friends, including Ron (my second-oldest brother) and Merrie, and some of their kids and grandkids: Dave, Jill, and their four little ones; Andy, Marie, and their two youngsters; and Rob and Ashley. Family friends Dave and Kathy completed the group at the cabin.

A trip to this area would not be complete without a walk across the sandbar (technically a “tombolo”) to McMicken Island at low tide. The dramatic tidal changes in the southern part of Puget Sound (18 foot changes at the full moon) rival those of other famous extreme tidal basins, like the Bay of Fundy in Nova Scotia/New Brunswick, and the Cook Inlet/Turnagain Arm area near Anchorage, Alaska. At McMicken, the tides determine whether you’re walking, wading, or boating to get to and from neighboring Harstine Island.

We had a wonderful visit with my Aunt Gayle, and several cousins, including Katie and John, and Betsy and Andy (plus their granddaughter). We got to have lunch on Harstine with cousin Peter and Kathleen, who have the primo views of both McMicken Island and Mt Rainier from their property.

We took a day trip into the Seattle area to spend time with my mom, enjoying another view of Mt Rainier (known locally as “the mountain”), as well as a yummy dinner at Black Angus.

We ended our time in Puget Sound with an early morning paddle from Harstine to McMicken, where we watched a mother harbor seal and her adolescent pup, always a thrill when we come here.

We did our best to capture some of the birds of Harstine and McMicken—and here are a few: a bald eagle, chickadee or nuthatch, and junco. 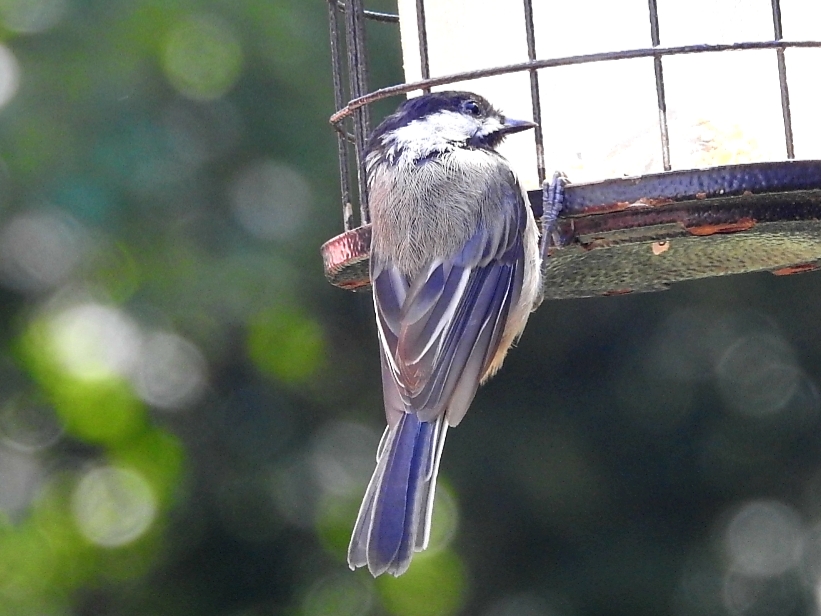 For those of you who know our cats, Danno and Leilani gave a giant paws-up rating to our stay on Harstine, where they explored Merrie’s wildflower garden and Ron’s trails through the forest without worrying about other campers, vehicles, or dogs—truly a cat’s paradise (except for the harnesses, which are a necessity when we travel).

We ended our Washington Wanderings in the Spokane area, driving along the scenic I-90 to make our way toward Montana and Glacier National Park (featured in the next post). Thus far we have avoided wildfires (though not the smoke) and accidents (though not all delays). We are grateful for our health and the opportunity to safely travel in our motorhome this summer.