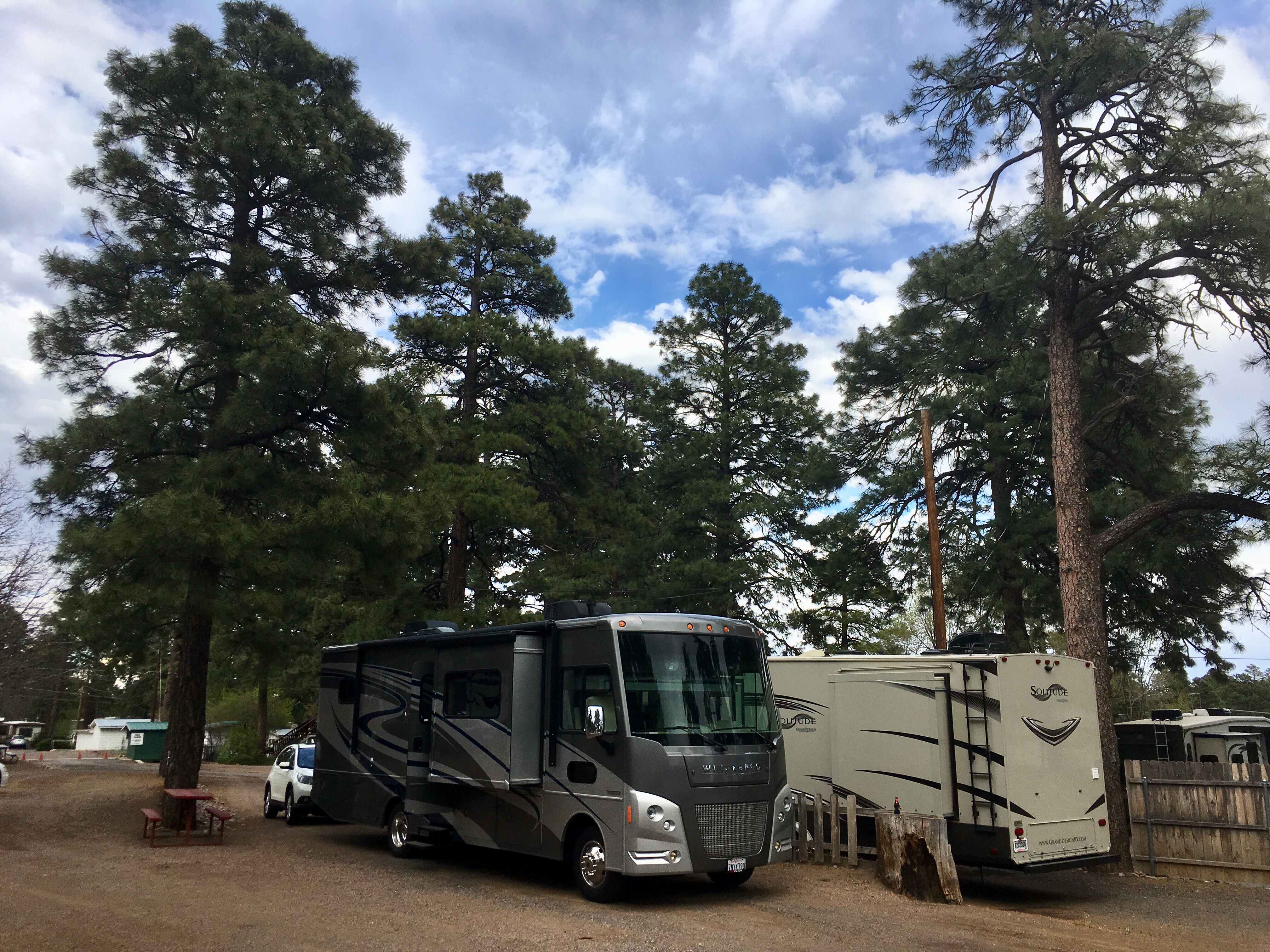 We’ve just completed our first week of 15 on our trip from SoCal to the East Coast, and what a week it has been!

I’m sitting here in beautiful western Kentucky, where we are camped on the banks of the Mississippi River in Columbus-Belmont State Park, where the birds are singing and the sun is shining. But the last 2000 miles and 7 days to get to this place were not all singing and sunshine. 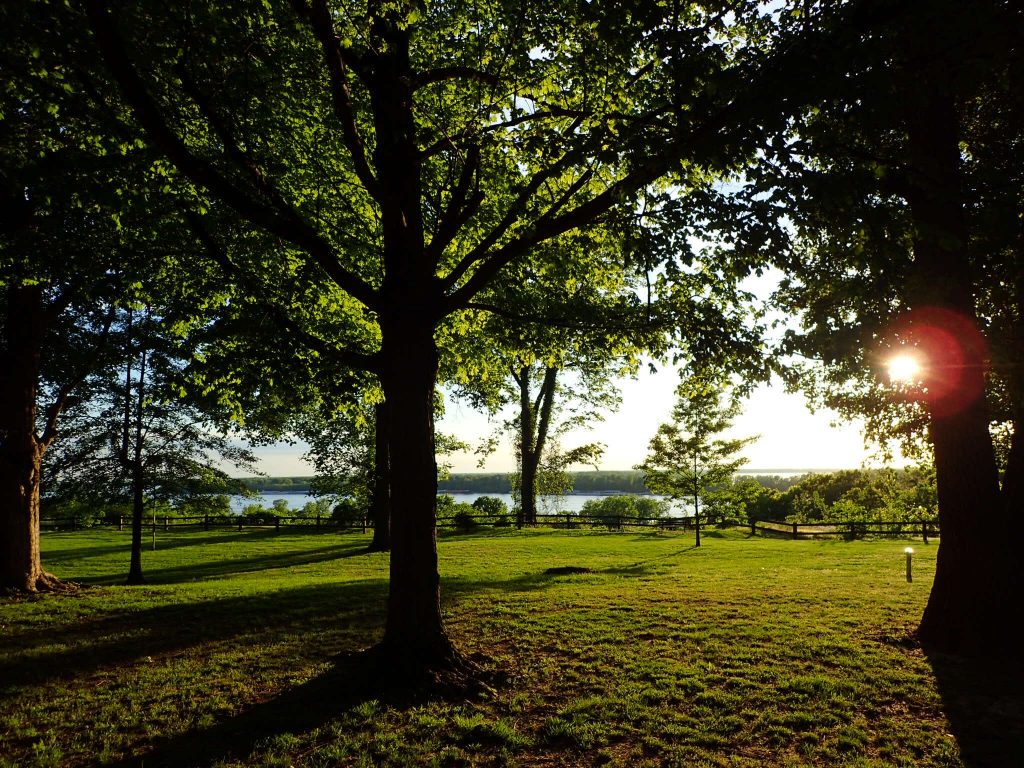 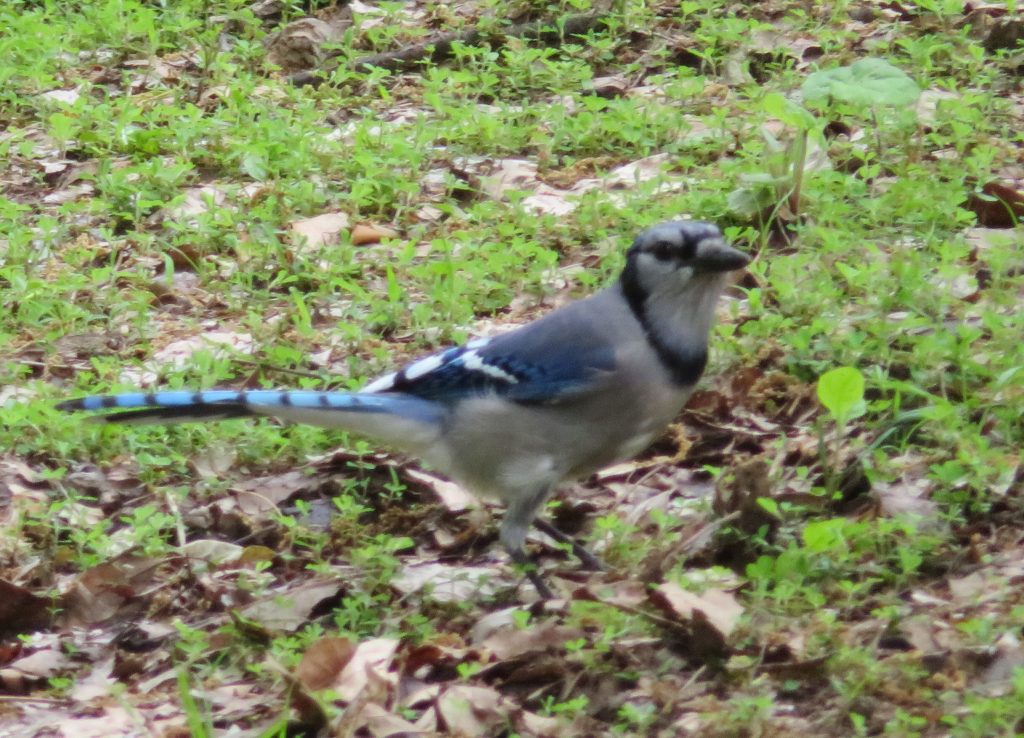 Our route out of California was uneventful, and we wrote previously about our stay in Calico Ghost Town. We had a lovely campsite in Flagstaff, Arizona, with a hike in the national forest adjacent to the RV park. But then the troubles began…

1. In trying to level our RV, we inadvertently broke the brake cable connected to our car (which we tow). It didn’t mean we couldn’t tow the car, but it was something that needed to be fixed sooner rather than later.
2. We also discovered that the left blinker and brake light were not working on the back of our tow car, and we couldn’t completely diagnose the source of the problem. This meant that people behind us couldn’t see our left turn signal or brake lights on the back of the car.
3. Then on the interstate between Flagstaff and Albuquerque, a rock flew up and chipped the windshield on the RV. This was something that needed to be fixed immediately.

Fortunately, we were planning to spend two nights in Albuquerque, and fortunately, people were kind and gracious to help us. We called a windshield place in Albuquerque and they fit us in for the last appointment on that Friday afternoon, 4:30 pm (before closing time at 5:00). But of course, there was a big accident on the freeway, and we weren’t going to get there until 5:00. Not to worry, Horizon Auto Glass & Tint said. They would wait for us—and they did! Windshield fixed, though the insurance company gave us a bit of a run-around, which is still being resolved.

The next morning, Hank’s cousin Dick came over and helped him diagnose and fix the blinker/brake light problem, so problems 2 and 3 were solved. (And Hank’s cousins Dick, Elizabeth, and Natalie fed us a great meal on Saturday night!) 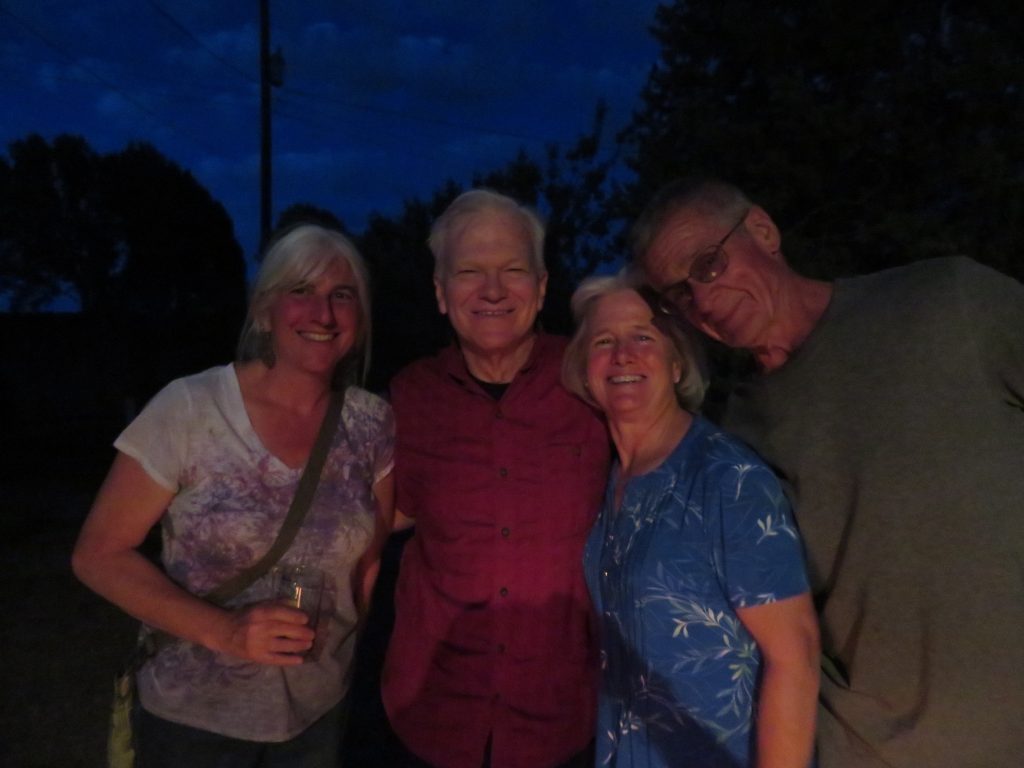 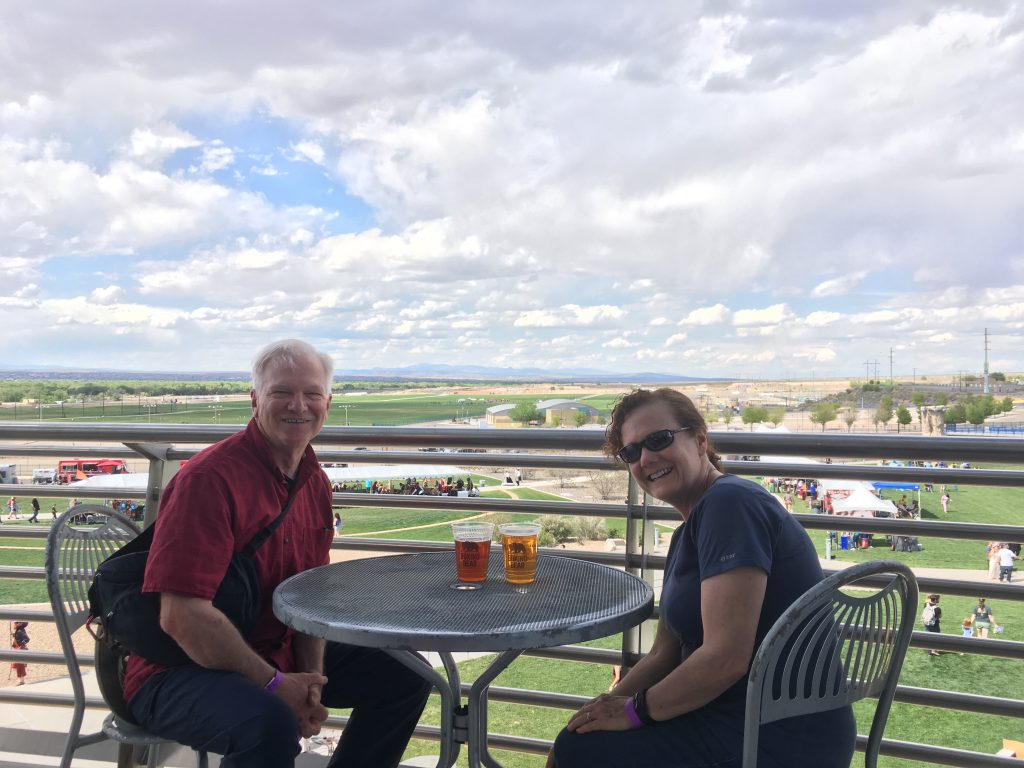 But what about the brake cable? On Friday, in the midst of windshield chips, freeway accidents, etc., Hank was on the phone with the manufacturer of our towing system. We probably needed a new brake cable and so we rerouted our trip.

We looked at the map and figured out that it was only about 50 miles longer to go to Iola, Kansas (where the tow bar manufacturer was based), rather than Amarillo and Tulsa, so we cancelled reservations and made new reservations. Ever been to Guymon, Oklahoma? Neither had we, but it had a funky RV park with its own drive-in movie theater (no movies showing that night, unfortunately). It also had a LOT of wind, and the cats wondered if the RV was going to tip over in the night—it didn’t! 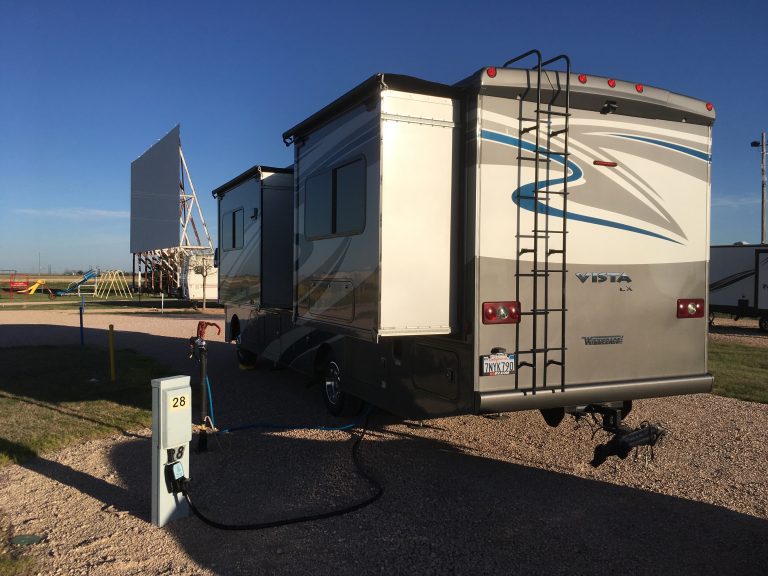 So, on to Iola, Kansas, about 2 hours east of Wichita, through extremely windy conditions and a fair bit of rain. These are the kind of days when Hank does all the driving, because it’s just too scary for me (Cindy) to drive in all that wind. But we made it and settled down in the parking lot of the towing system manufacturer (NSA RV Products) until morning (no hookups, but we were comfy-cozy, at least until the thunderstorms started pelting the RV for half the night).

In the morning, NSA got right to work and had us all fixed up by 11:00 a.m. They rebuilt the tow bar, installed a new brake cable and did a complete safety check. Whew! 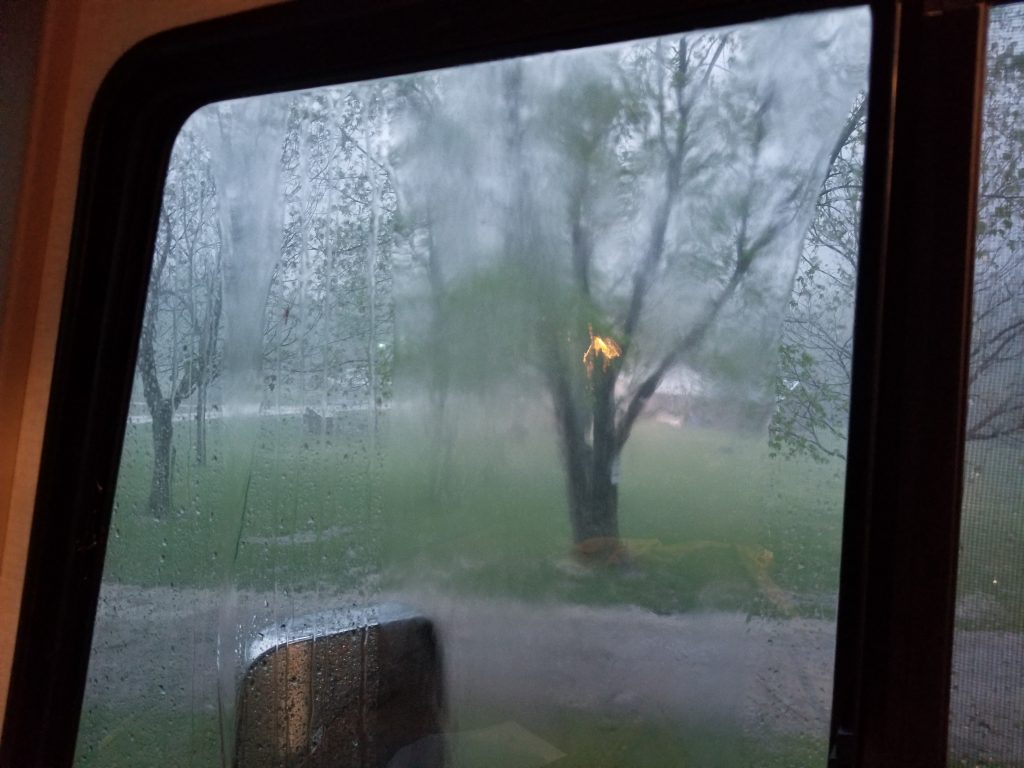 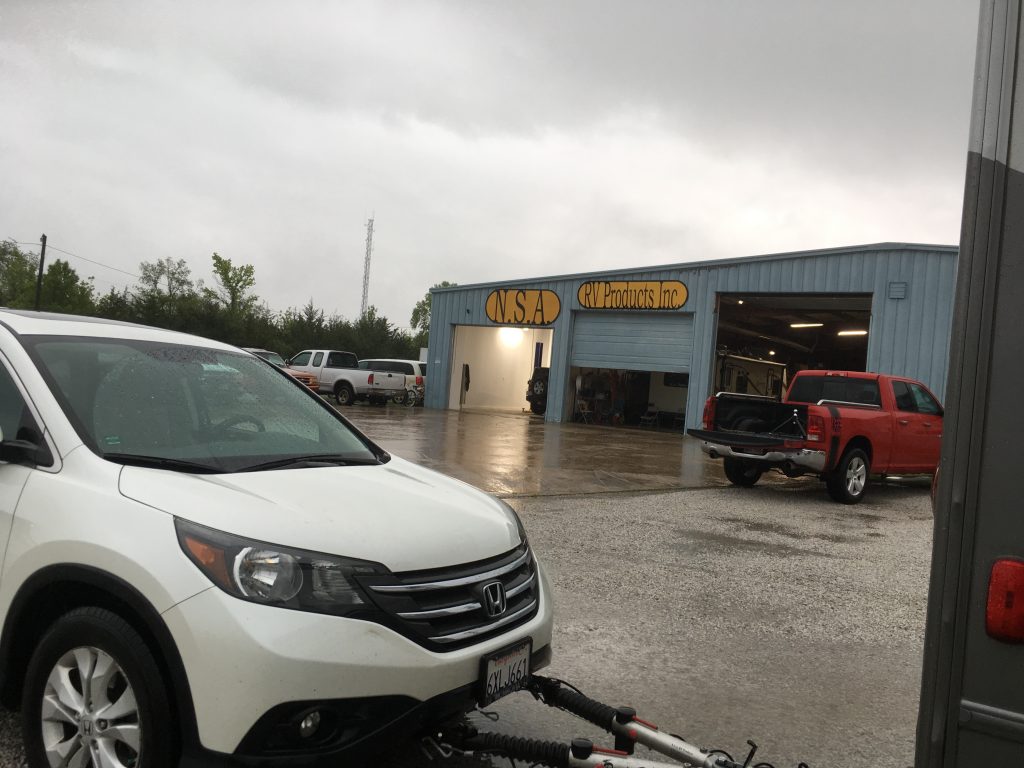 Heading east out of Kansas and south into Missouri, we raced to stay ahead of the storms we knew were coming, mostly winning, but encountering extremely heavy rain near Springfield, Missouri. It let up, and we arrived at our campsite at the Laura Ingalls Wilder RV Park in Mansfield, Missouri, with dry skies. This RV park is right next to the home where Laura and her husband Almanzo lived for most of their married life, and where Laura wrote all the Little House books. 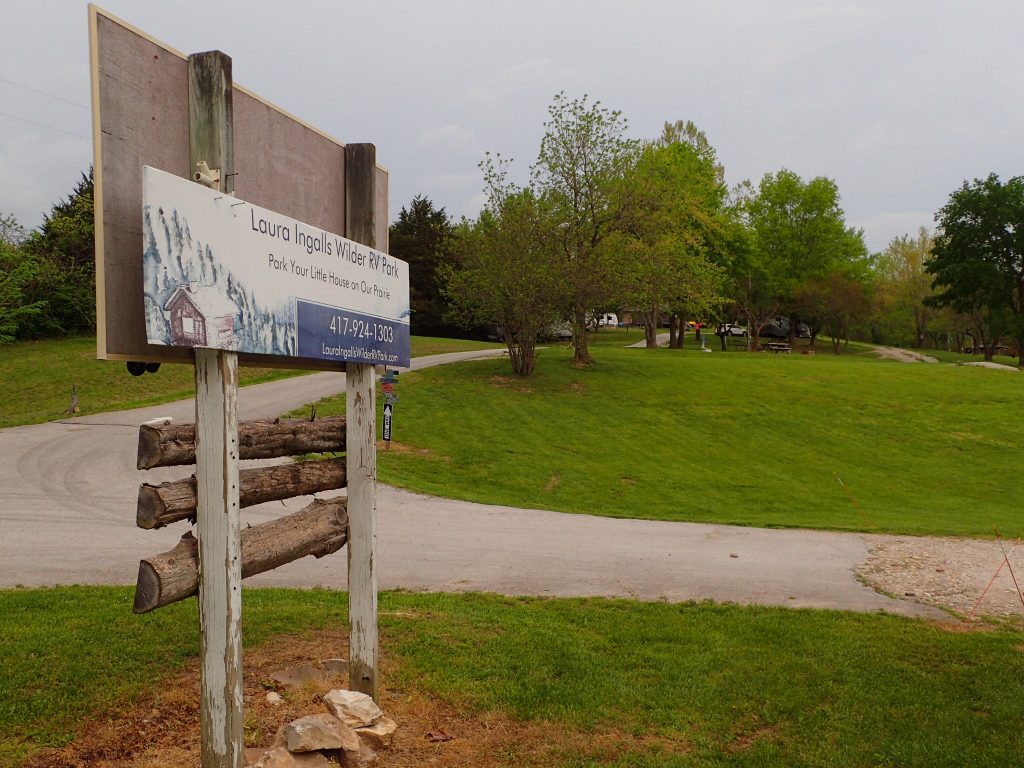 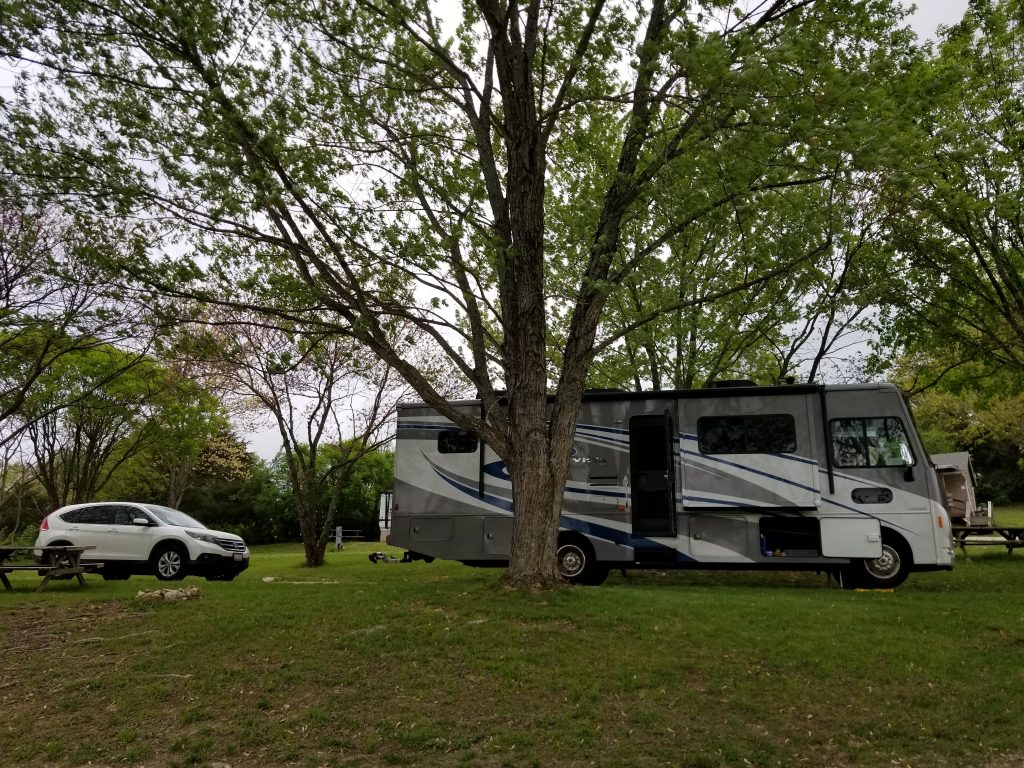 We were glad to be settled after all that rain. But our troubles were not done. Hank discovered that with all that rain, we had a leak into the RV, and he MacGyvered a couple of different solutions until something worked to stop the leak.

Thunderstorms started early in the evening and continued after we went to bed. Then we were abruptly awakened by alerts on our phones, telling us there was a tornado warning for our area and we should seek shelter. Well, where do you go for shelter when you’re in an RV? We stood in our little hallway between the bathroom and the shower and prayed that the tornado would pass us by, which thankfully it did!

Tornadoes did touch down in nearby towns and we lost power for part of the night.
The alert passed soon after and we had a relatively quiet night, except for the lightning, thunder and heavy rain that continued until morning. But we woke up the next morning refreshed, visited Laura Ingalls Wilder’s home at Rocky Ridge Farm, and then headed out to try to beat the next storm coming through. 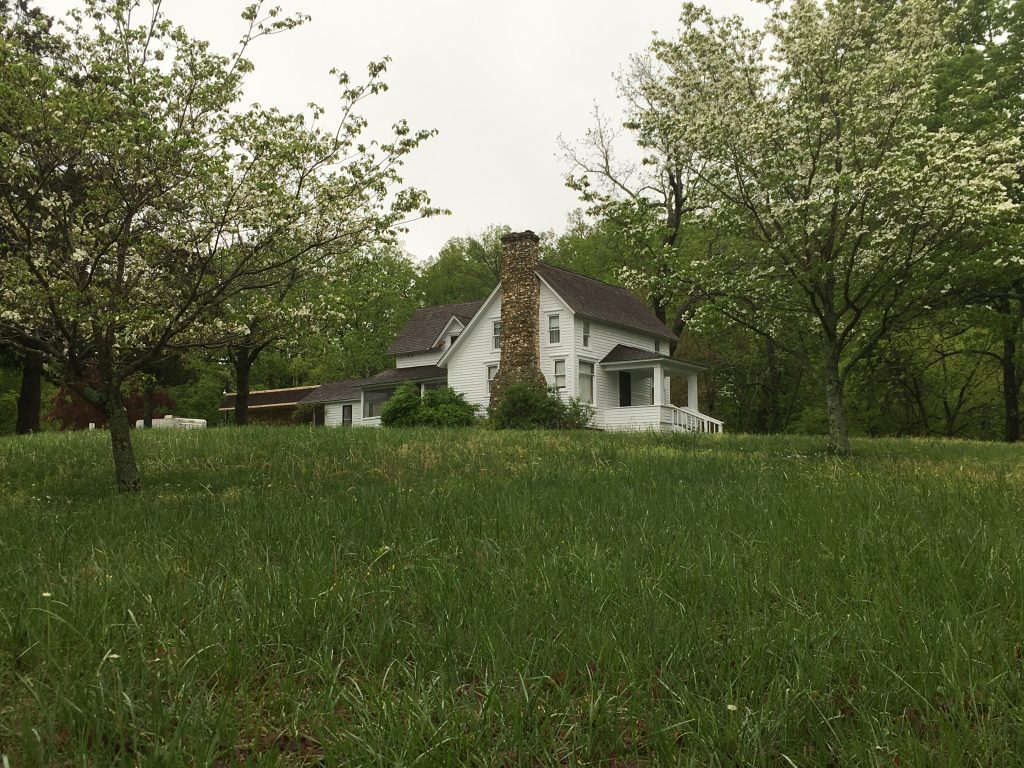 Though we had rain much of the day, it was light as we traveled through southern Missouri, and we thought our problems were over. That was true, until we hit the narrow bridges over the Mississippi and Ohio Rivers, traveling from Missouri through a tiny corner of Illinois and into Kentucky. Passing oncoming semi-trucks in a big RV on a skinny two-lane bridge is not Hank’s idea of fun! 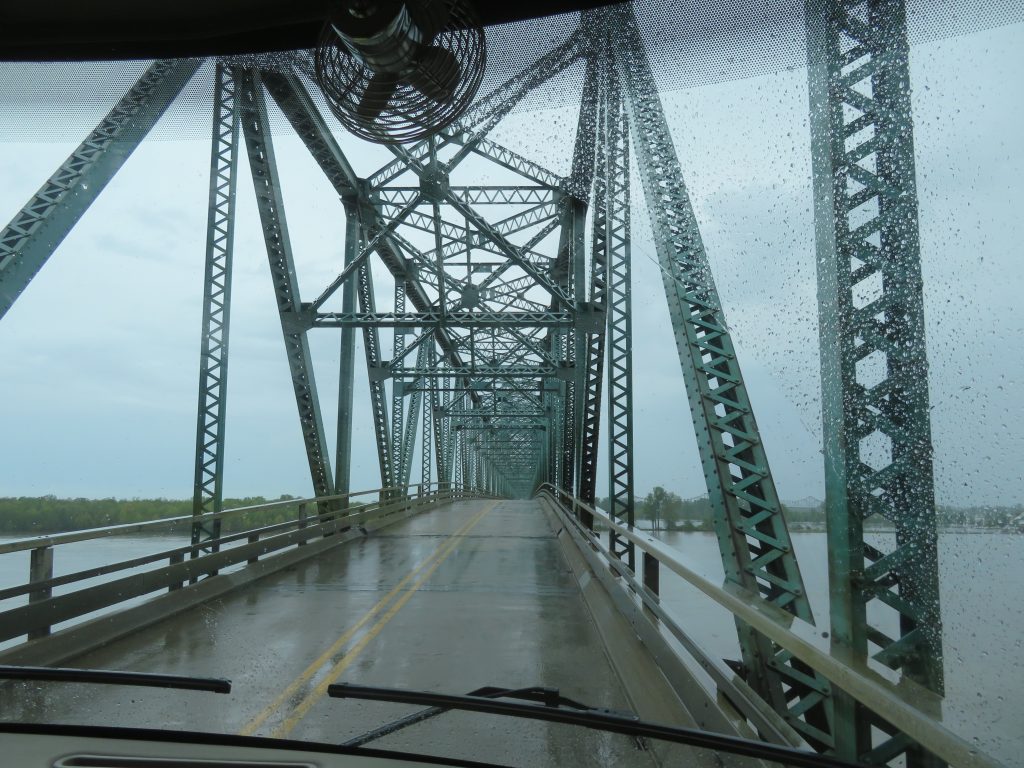 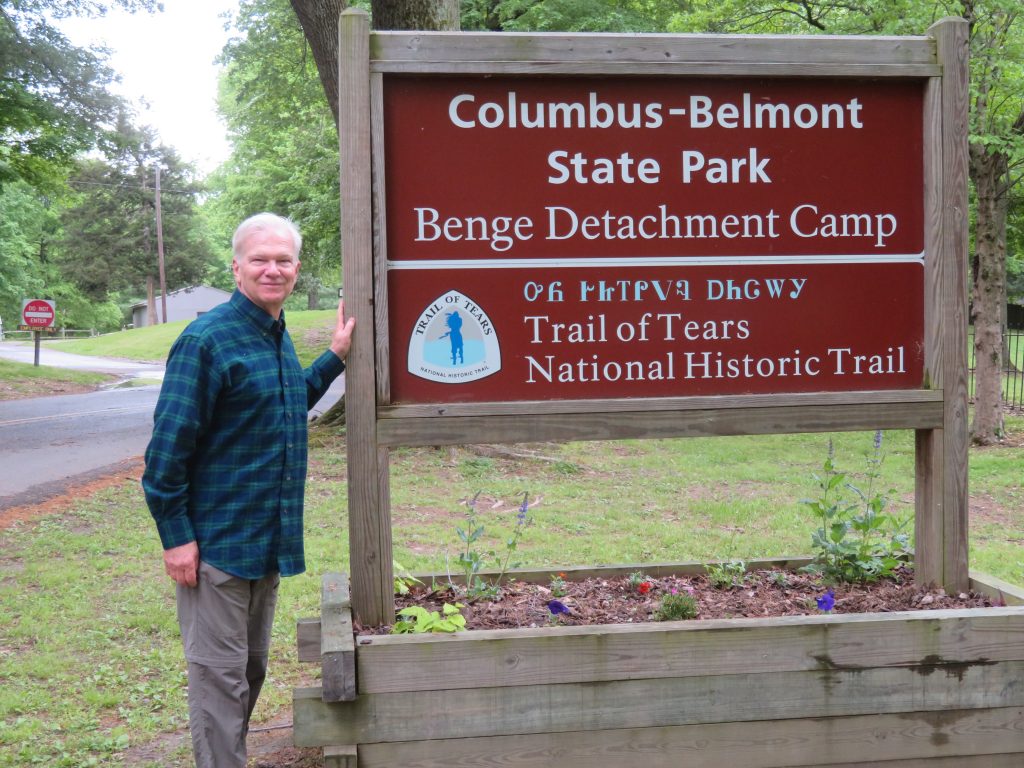 Enduring the bridges and the windy, narrow roads brought us to the state park where we are currently camped. The promised thunderstorms have not yet materialized, though we are likely to have another pounding night.

All this to say, we are safe and well, and though these challenges have kept us on our toes, we have endured and solved each problem, often with the help of others. On to Mammoth Cave National Park tomorrow, and hopefully we will continue to outrun the storms!

2 thoughts on “When it Rains, it Pours – The Challenges of RV Travel”