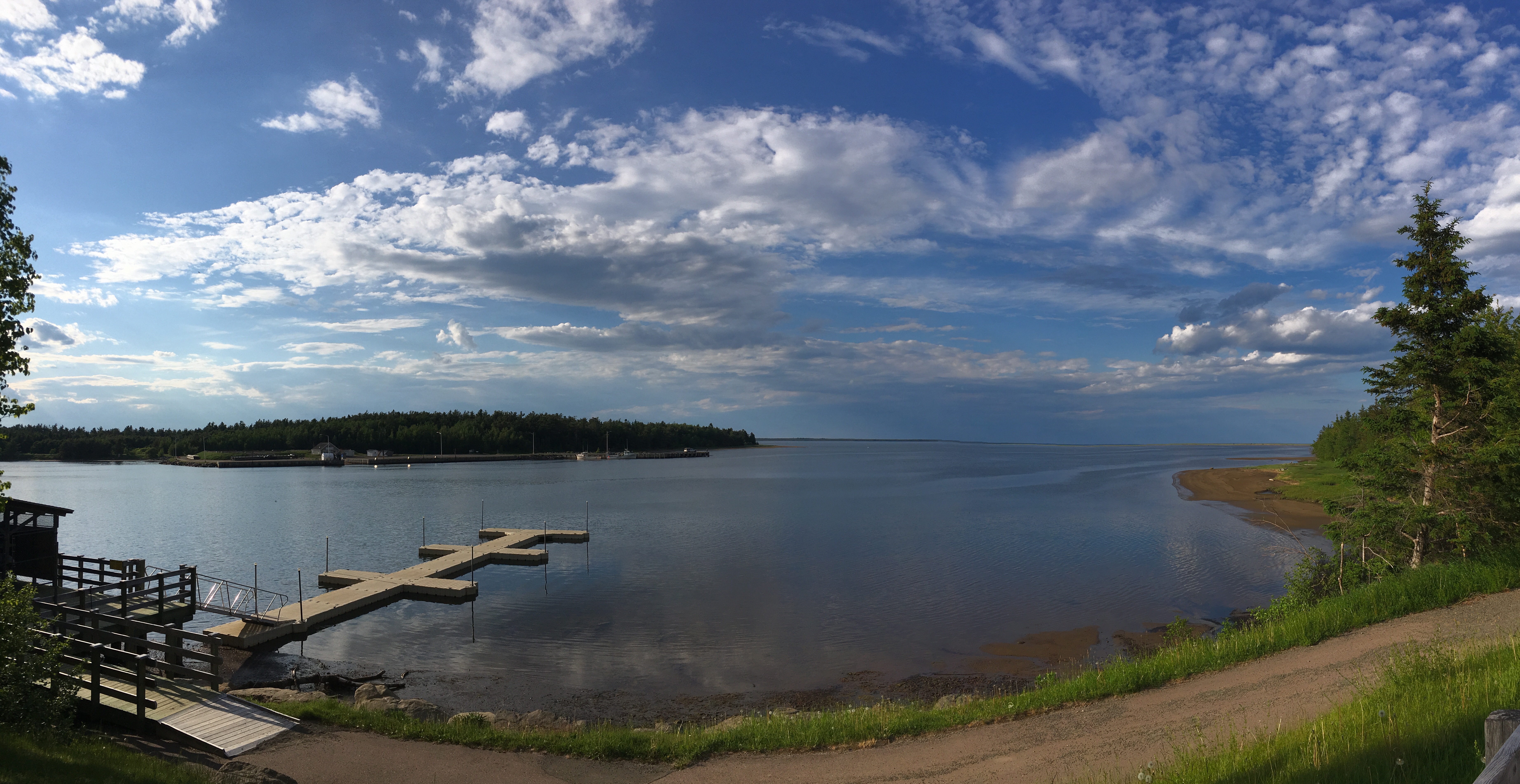 When last we visited New Brunswick (three weeks ago), we concentrated on the coast of the Bay of Fundy (see “Fundy Fun Days” post). After visiting Prince Edward Island, we now had the chance to explore the northeastern coast of New Brunswick, which is heavily French-speaking/Acadian.

Back in the 1600s, this area was settled mostly by the French and called Acadia (including much of the state of Maine and other sections of the Maritime provinces). However, in the mid-1700s, during the Great Expulsion, the British forcibly removed Acadian (French-speaking) people from their homes and farms. Some were deported to France; others to Louisiana (who became Cajuns, a corruption of “Acadians”). Some Acadian settlers managed to stay in the area and moved to less-desirable parts of the Atlantic coastal region. That is how eastern New Brunswick got settled.

Our first stop here was Kouchibouguac National Park. This is not a French word. It is not an English word. The park is named for the Kouchibouguac (koo-shee-boo-gwack) River, and it’s a Mi’kmaq (First Nations) name that means “river of the long tides.” This makes sense given that the river flows into the Gulf of St. Lawrence, and has extreme tidal action (though nothing like the Bay of Fundy’s rivers). 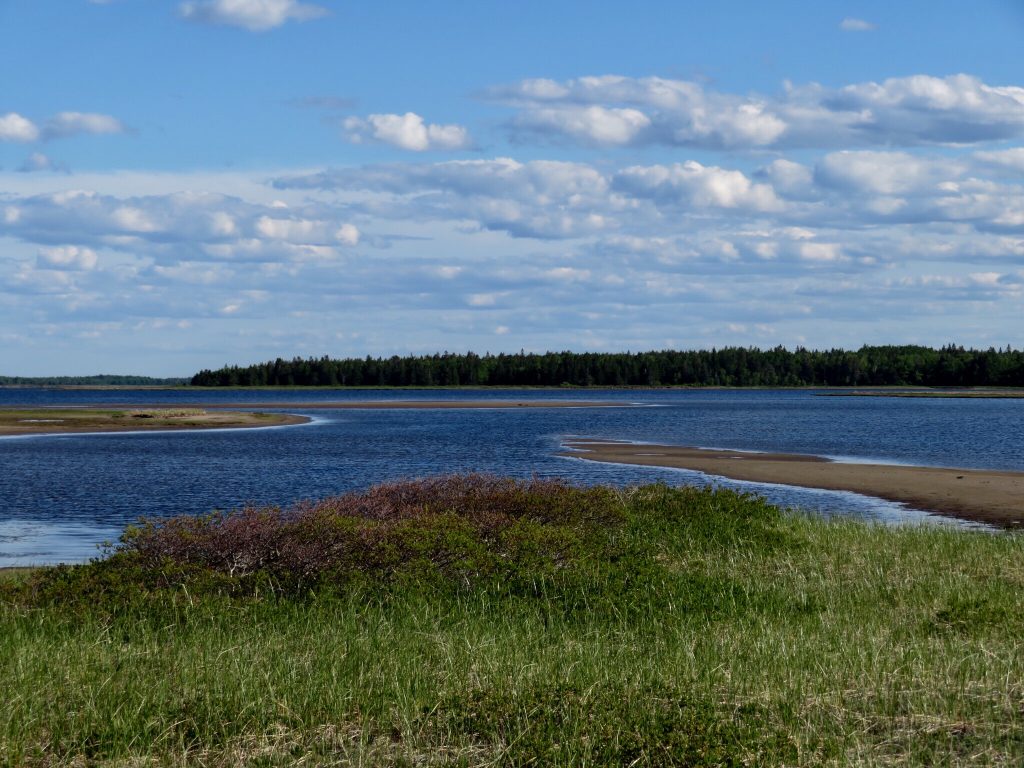 This national park is great for biking and kayaking/canoeing, both things we enjoy doing. So after set-up, we hopped on our bikes and rode some of the 40 kilometers of trails in the park, finding a scenic spot to enjoy happy hour. 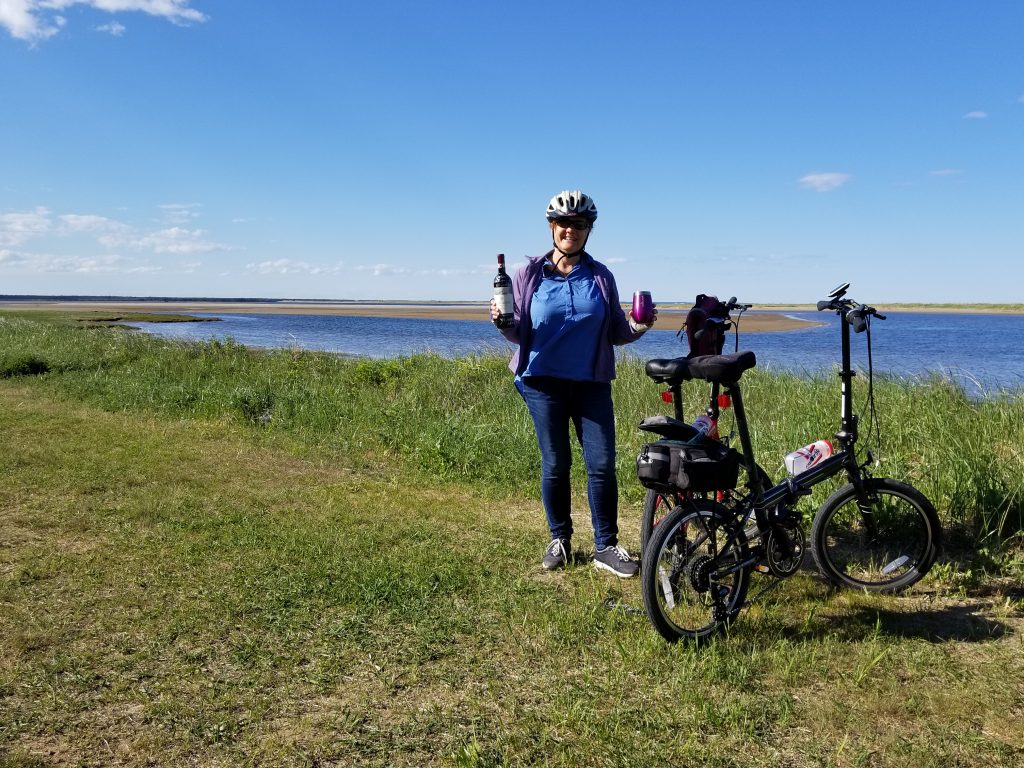 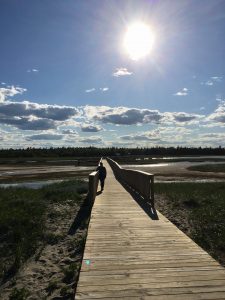 One of the most popular parts of the park, Kellys Beach, was virtually deserted when we were there, so we enjoyed these sand dunes and birds all to ourselves. There are a number of barrier islands in Kouchibouguac, and they provide habitat for the endangered piping plover (alas, no sightings by us), and many other species. 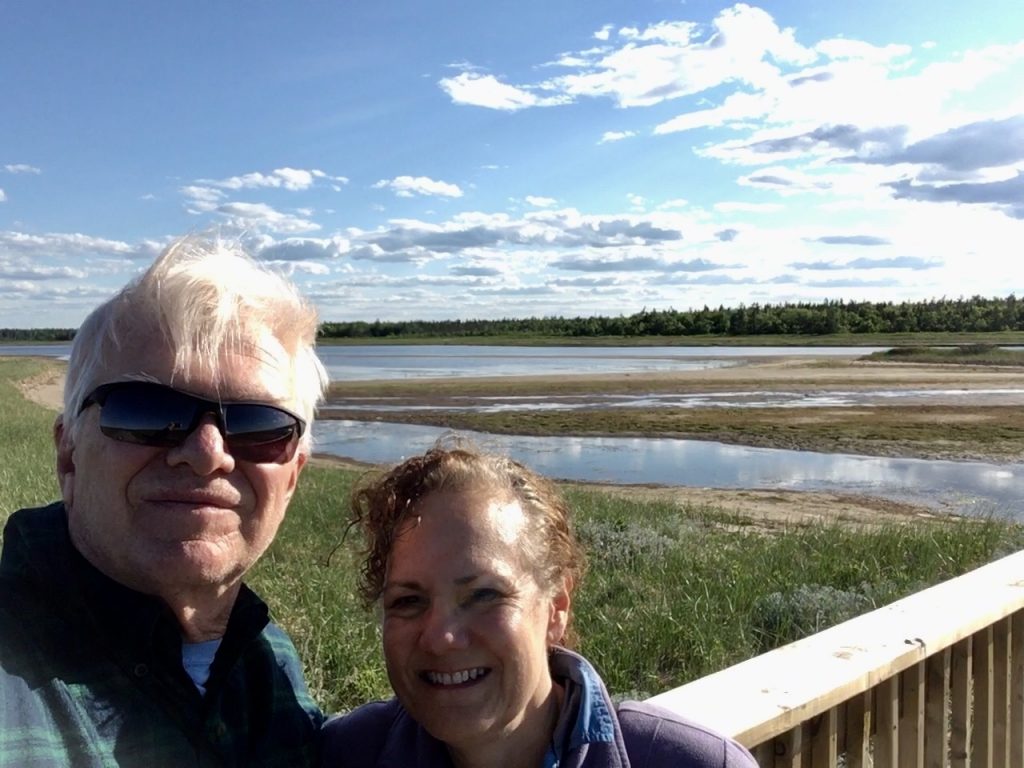 Next morning we headed out in a kayak to another barrier island in search of the piping plover (still no luck, but it was a lovely paddle). 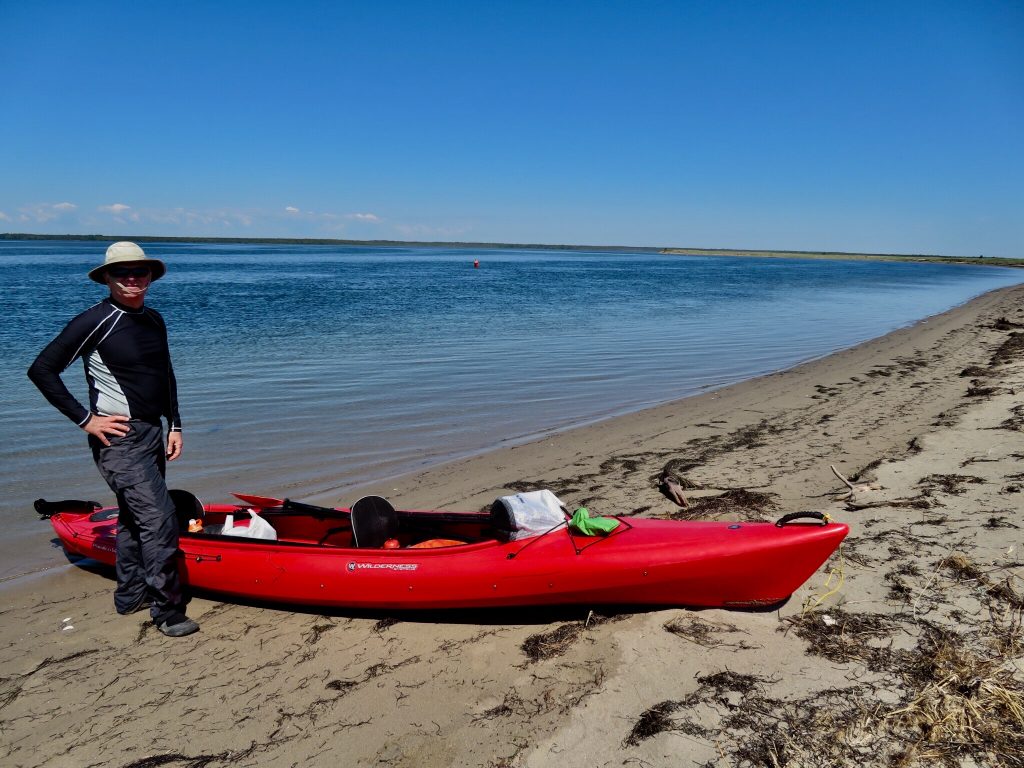 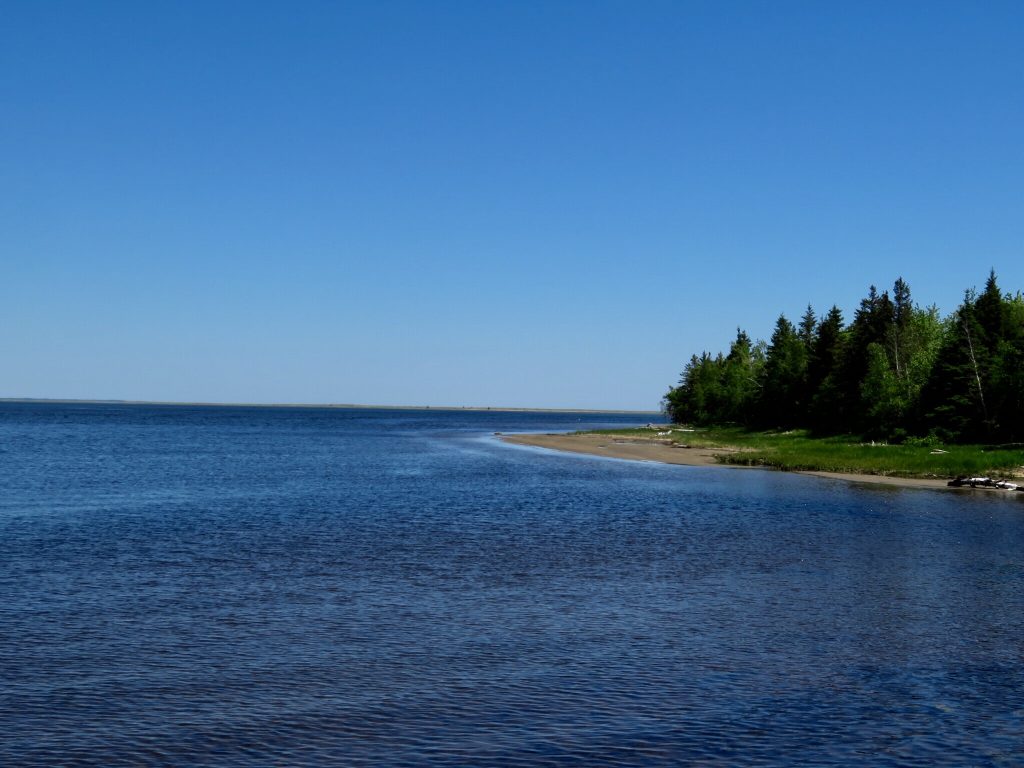 We saw evidence in our campsite that someone else had been using the site prior to our arrival. Who was this someone? Well, a quick search on Google images confirmed that we had lots of moose scat (poop) at our site. So, we hopped on our bikes again and went in search of moose. 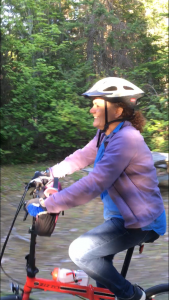 We saw beautiful forests and very well-groomed bike trails (reminiscent of the carriage roads in Acadia National Park in Maine). We saw lots more moose scat. But no moose. Only mosquitoes (and a red squirrel). 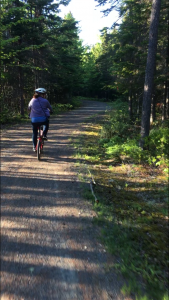 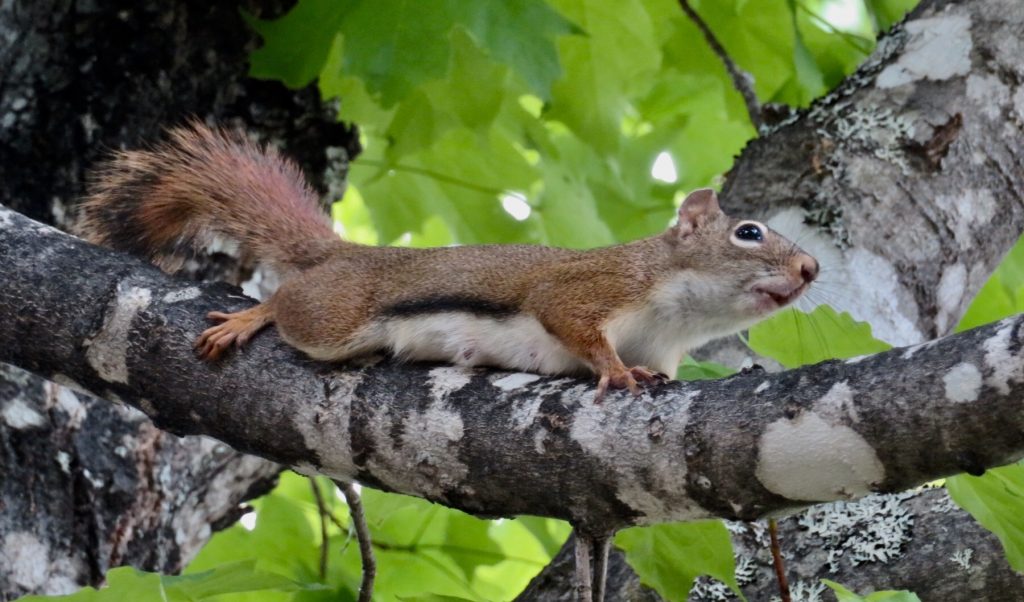 Still, this was a lovely national park, and one that not very many know about. 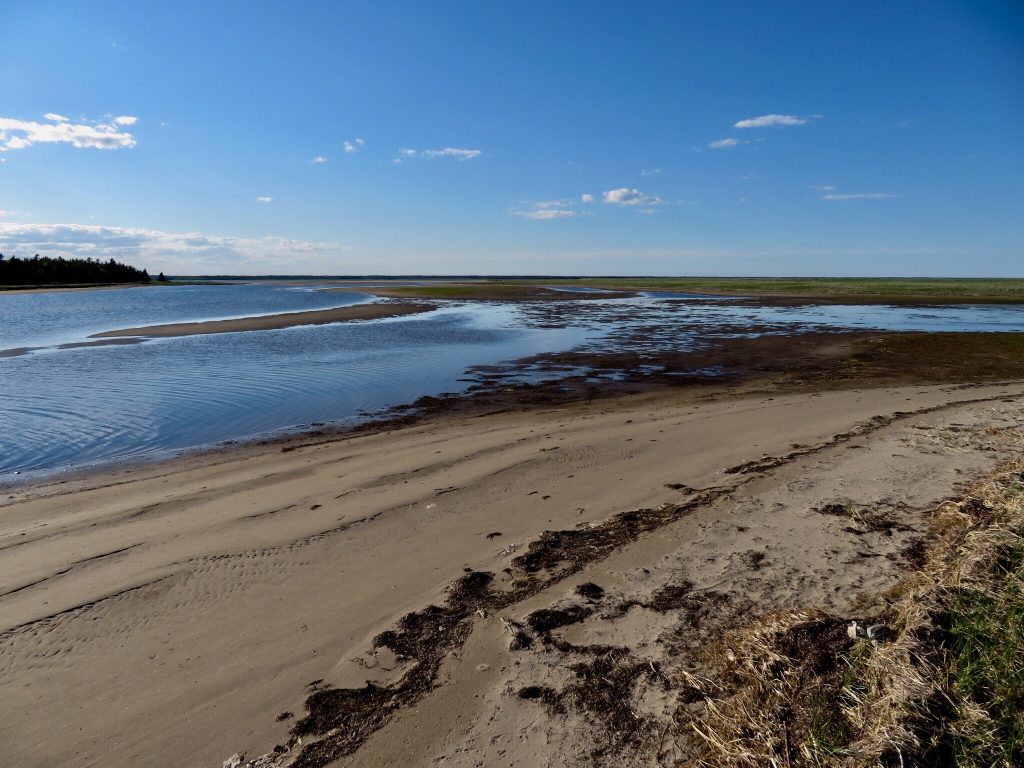 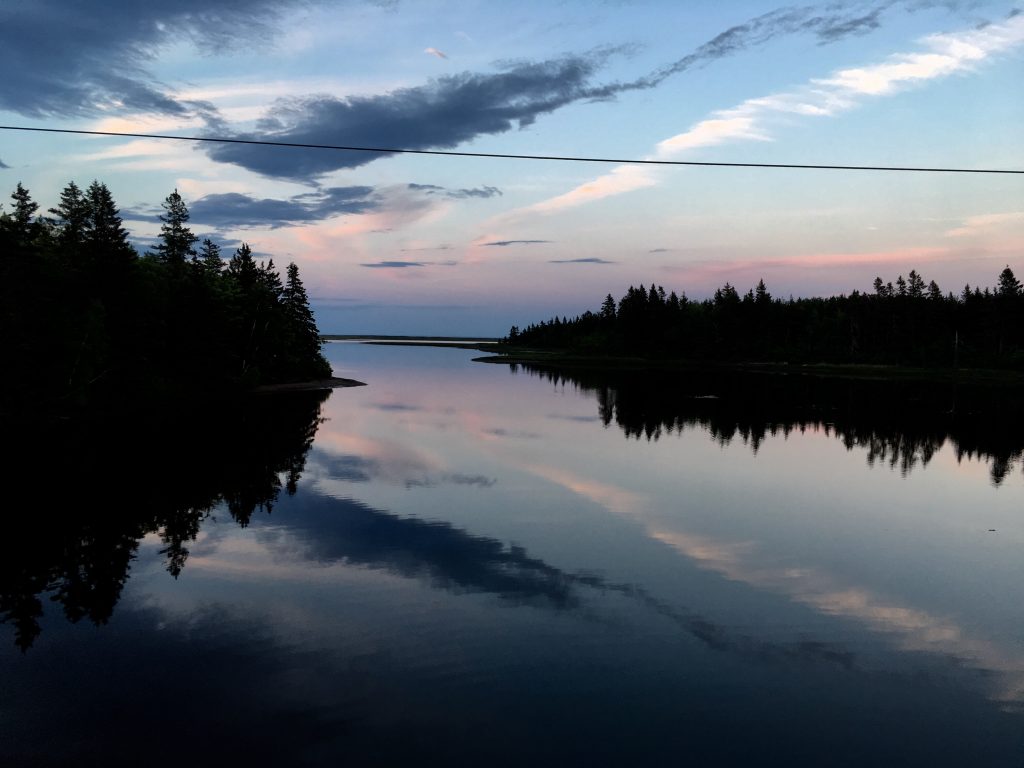 We moved on to a more populated area of eastern New Brunswick, the Acadian Peninsula, where we saw beautiful churches, lots of tri-color flags (a symbol of Acadian culture), and a gorgeous coastline. 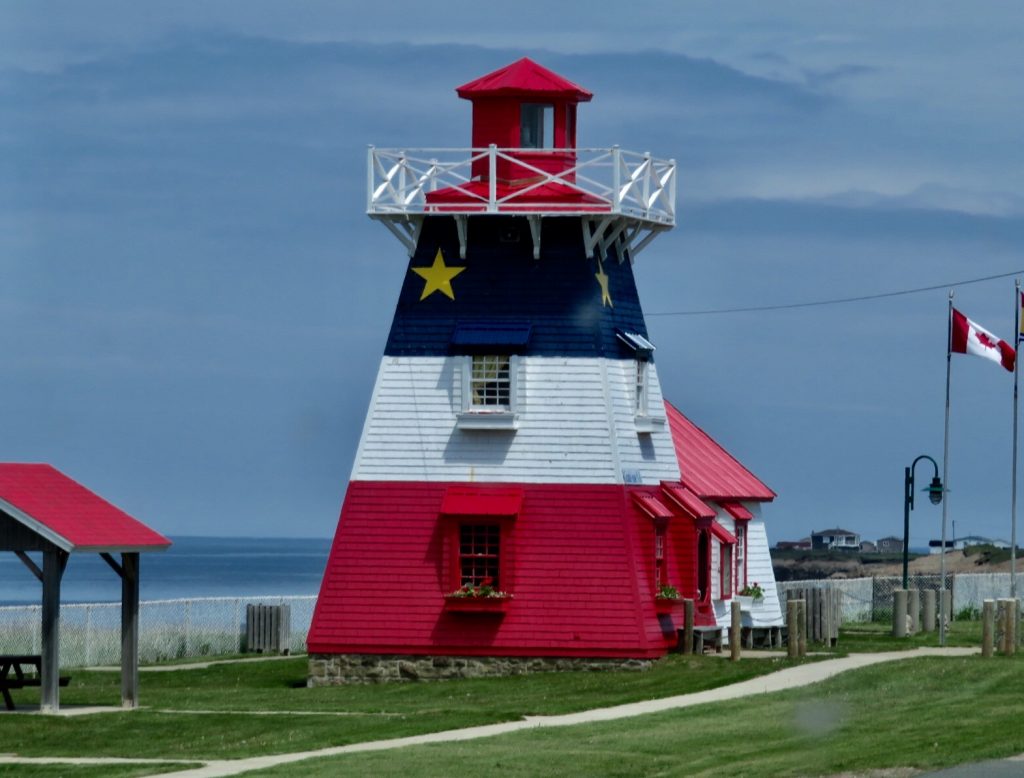 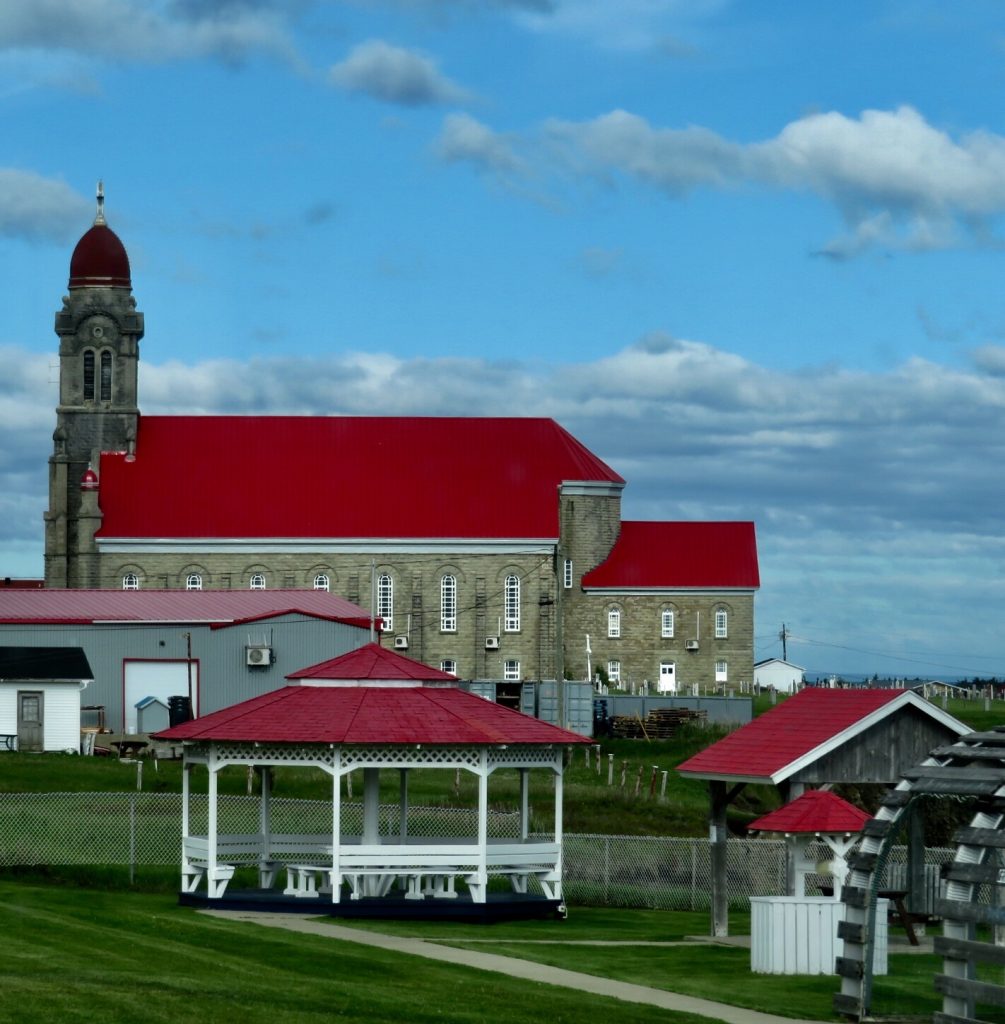 Our primary goal here was to visit the Acadian Historic Village (Village Historique Acadien), a living history museum that portrays daily life of Acadians between 1770 and 1949. It’s kind of like Plimoth Plantation in the Cape Cod area of Massachusetts, but covers a broader time period. 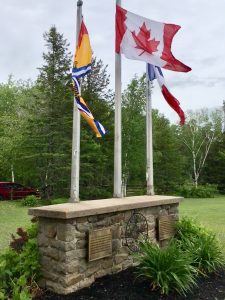 We thought the village was excellent. They have moved or re-created actual houses and business establishments from all over New Brunswick, and they have local residents who portray the people who would have lived at that particular time period. So, Mr. Martin talked to us about what it was like to live in his house that dates back to 1773. The tavern owner showed us what it was like to operate a tavern in 1880. Fortunately, their English was better than our French, so we understood most of what they were saying! 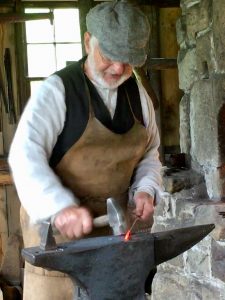 The village plants crops and keeps farm animals similar to what would have been done back in those time periods. 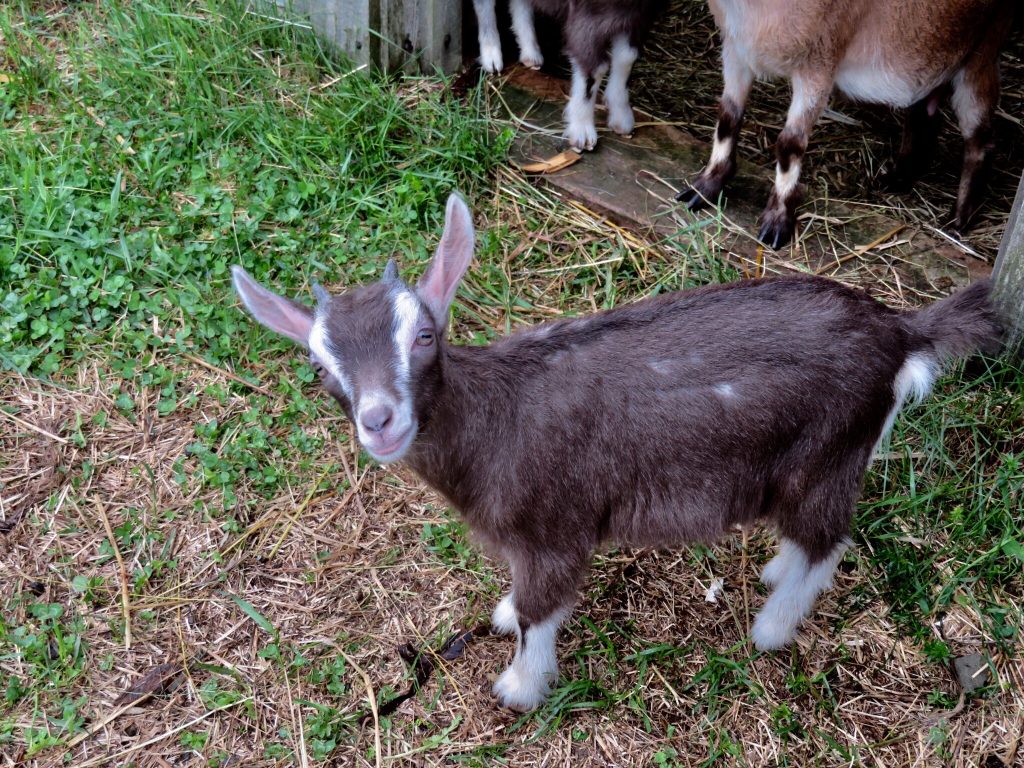 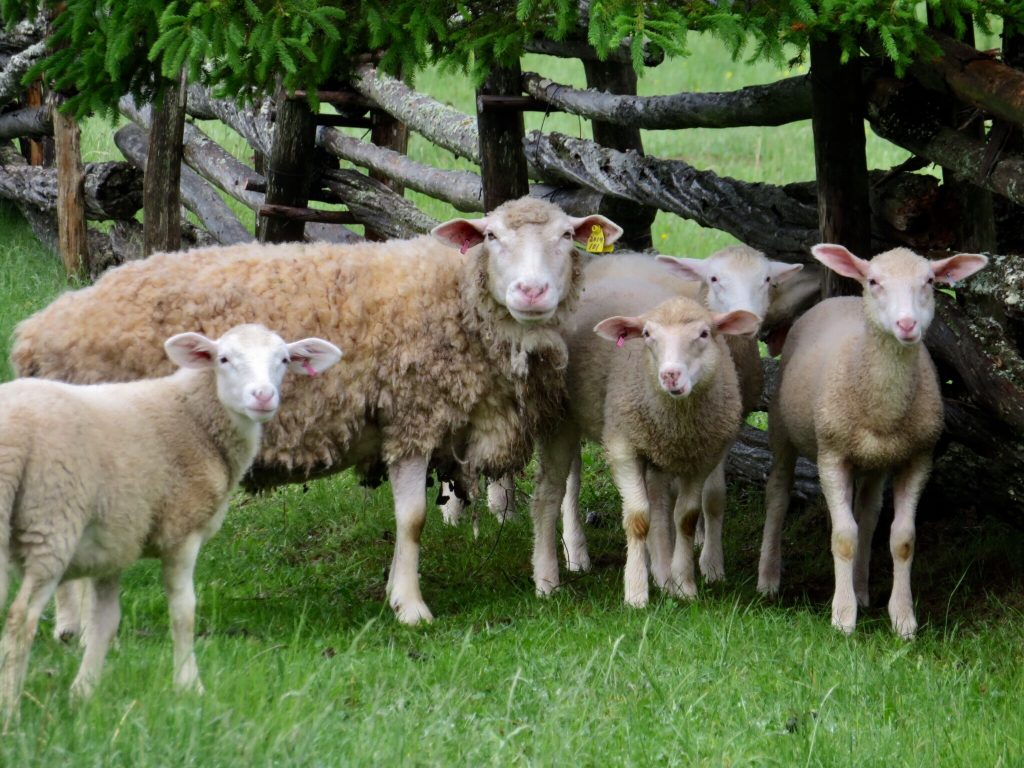 And you can even eat a meal at “La Table des Ancêtres” that loosely mirrors a traditional Acadian meal. 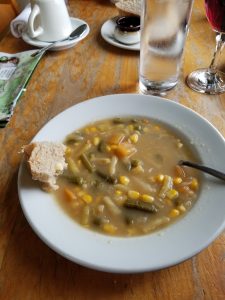 We learned a lot about Acadian culture and got in our walking steps as well! It was still early in the season, so there weren’t many visitors to the village, but apparently they get over 100,000 people at their festival in August. Well worth doing if you’re in the area. 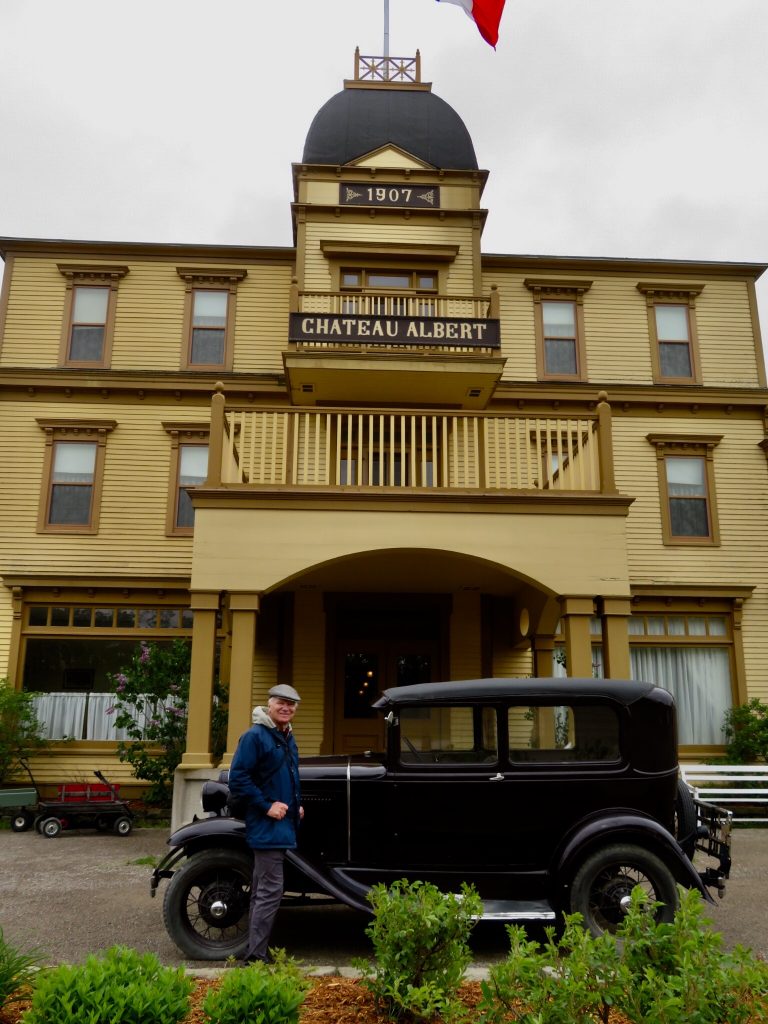 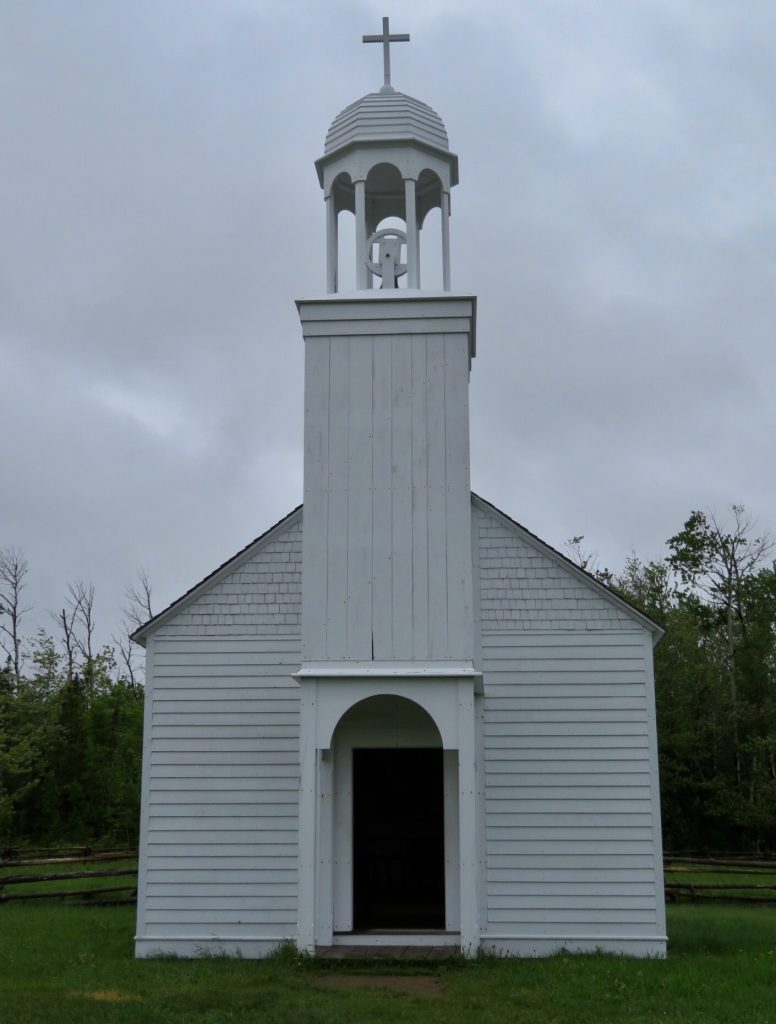 As we got ready to leave New Brunswick, Hank discovered that the friendly robin in the tree next to our RV had decided to build a nest on our motorhome engine. Good thing he discovered it before starting up the engine and driving off! 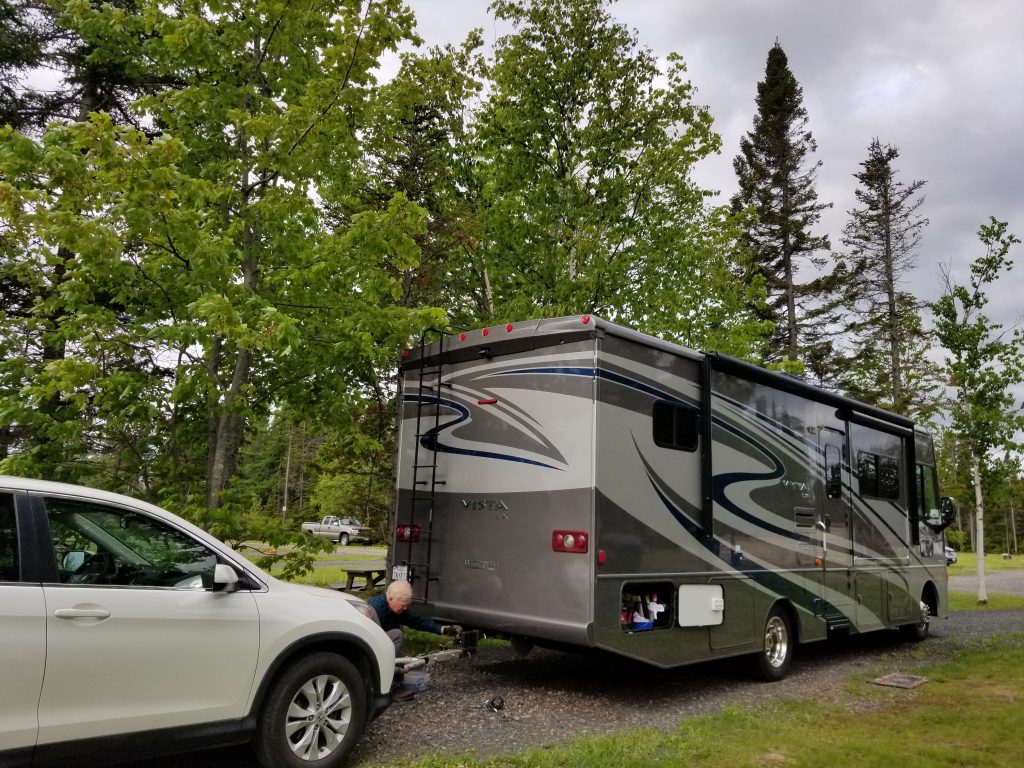 On to Quebec…(next post). And we even saw a moose (though no pictures).