It’s never fun to drive the RV in a big city, but we stuck to the outskirts of Chicago, arriving at our campground in the midst of a massive heat wave. Since we have explored much of Chicago on previous trips, this trip to the Windy City was mainly for two purposes—visit some of my high school friends and go to a Chicago Cubs’ game.

In between, we just tried to stay cool and were thankful for air conditioning in our RV (Remember our blog posts in May where all we talked about was the rain and the cold? Well, those days are long gone!).

Friends:
We enjoyed a wonderful dinner at Pappadeaux Seafood Kitchen with my high school choir director, Peggy, and her husband, Herman. And the Cajun food there was fantastic! It was a delightful time of catching up, since we last saw Peggy at our wedding in 1989 and had never met Herman before.

A couple of days later, our friends Gail and Lyle treated us to a splendid lunch (after we got a chance to attend church with them), and we had another fantastic time of catching up with them and Gail’s mom Adrienne. Gail and I have been friends since 4th grade, so there were lots of details to catch up on. There is something really special about traveling the country and reconnecting with people we rarely get to see. And once again, we were very spoiled by Gail and Lyle’s amazing cooking!

Cubs:
One of my fondest memories of living in the Chicago area in the late 60s and 70s was going to Cubs’ games at Wrigley Field. Hank had never been to Wrigley. So, we had to do it. We had purchased tickets ahead of time, so we were locked in to the day—the hottest day of a terribly hot week, where “Excessive Heat Watches” were happening all throughout the Midwest.

Traveling on the METRA train to get into the City, and then on the CTA Red Line to get to Wrigley Field, helped with the heat, as their air conditioning systems were working well, and we didn’t have to drive, find parking, or walk too far (my thanks to anonymous internet users who supplied information on how to get from Joliet to Wrigley via public transportation).

Wrigley Field looks beautiful after its recent renovation. They kept the best parts of this historic facility, and we had amazing seats right behind home plate. The heat was pretty bad, but we kept drinking ice water and buying ice cream, so we survived until our section got some shade. When the wind shifted and the place instantly cooled down about 20 degrees, all the fans stood up and cheered. 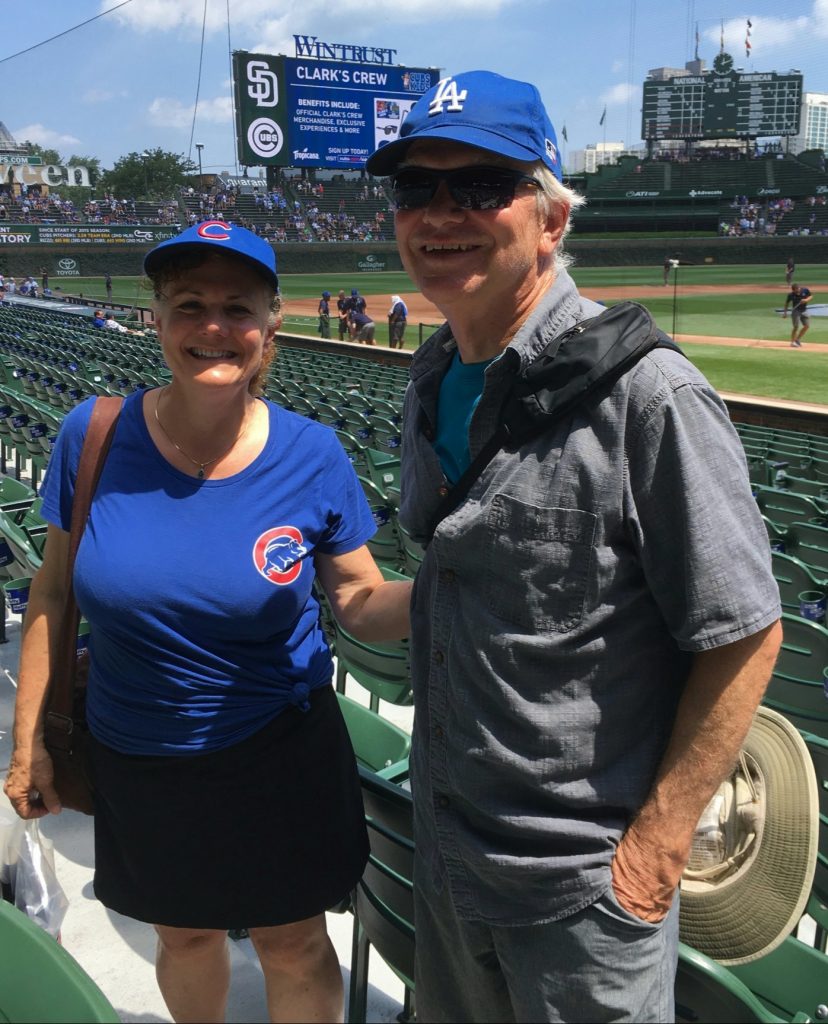 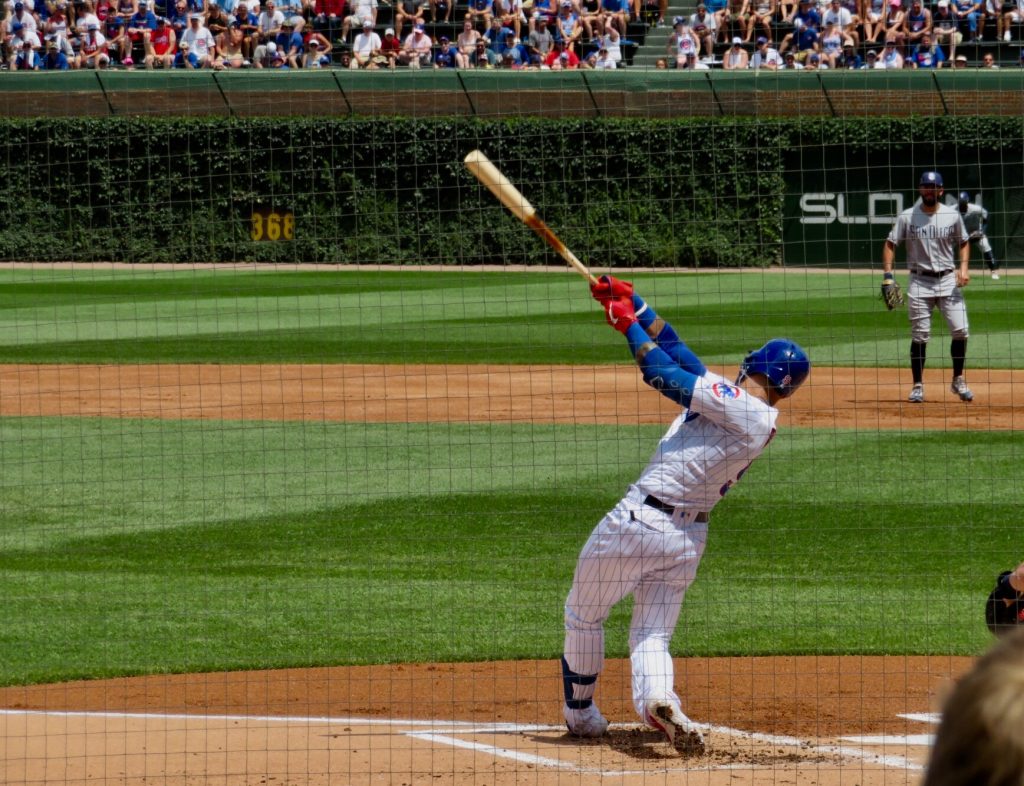 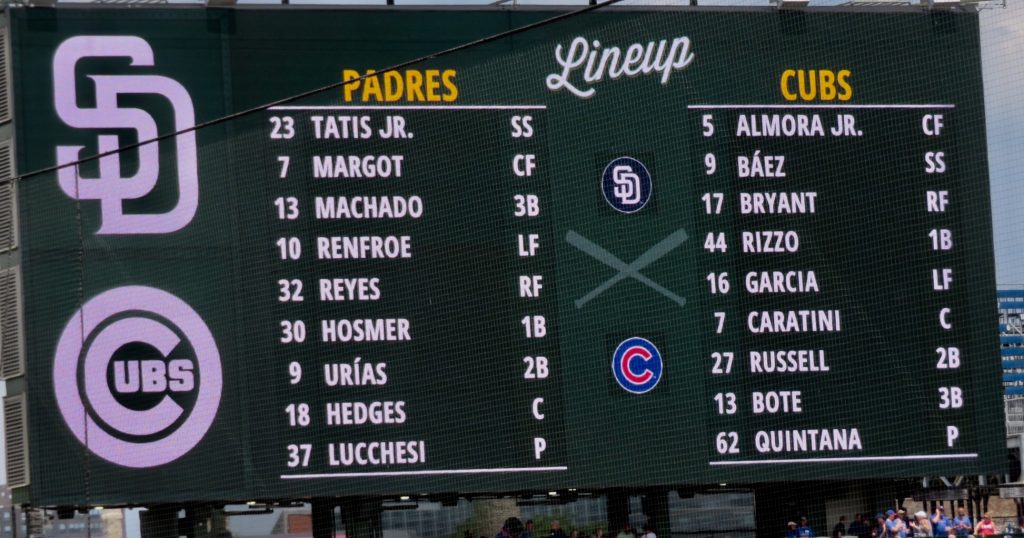 And we definitely cheered for the Cubs, who went on to beat the Padres 6-5. A very memorable day at Wrigley, in spite of (or partly because of) the heat. 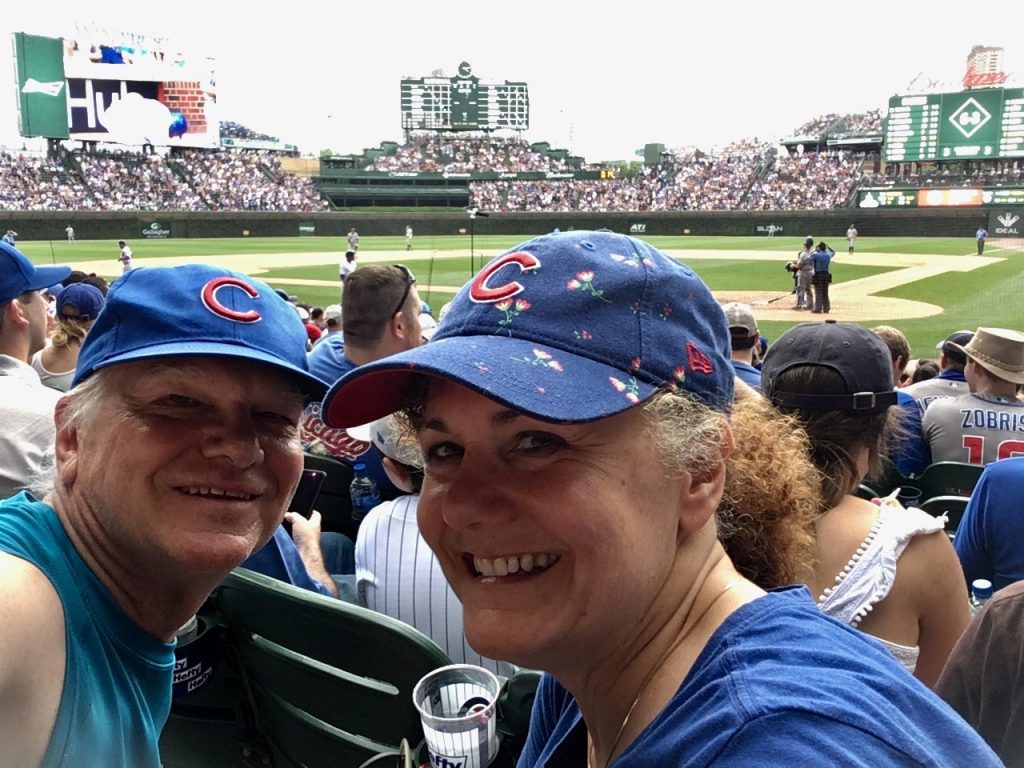 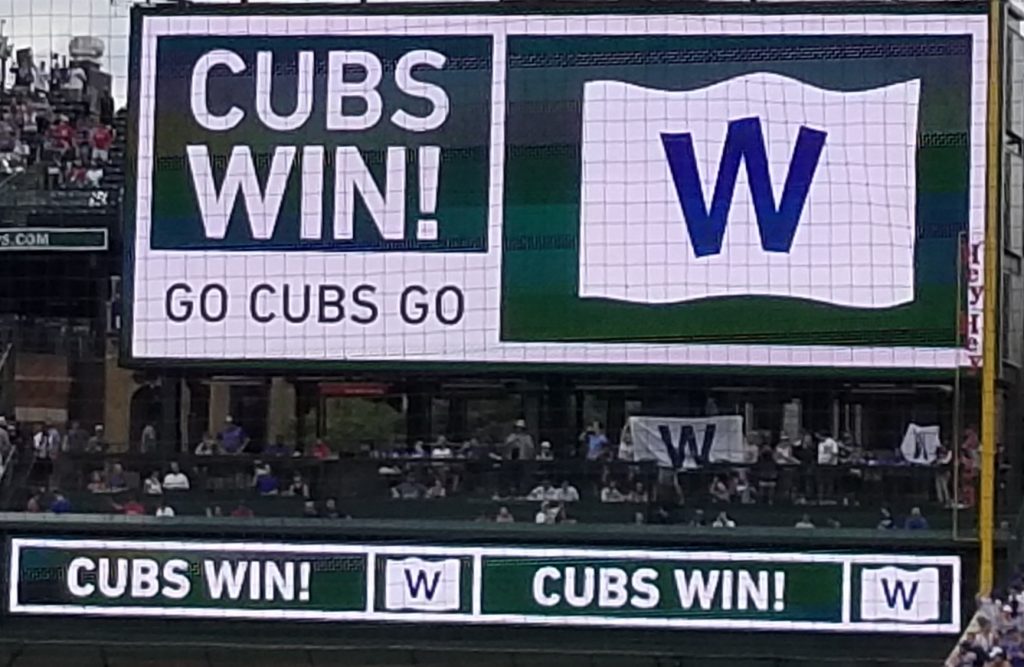 Corn:
As we drove through the state of Illinois, we were amazed at the amount of corn being grown, so of course we had to eat some. There’s nothing like fresh corn on the cob—what a treat! 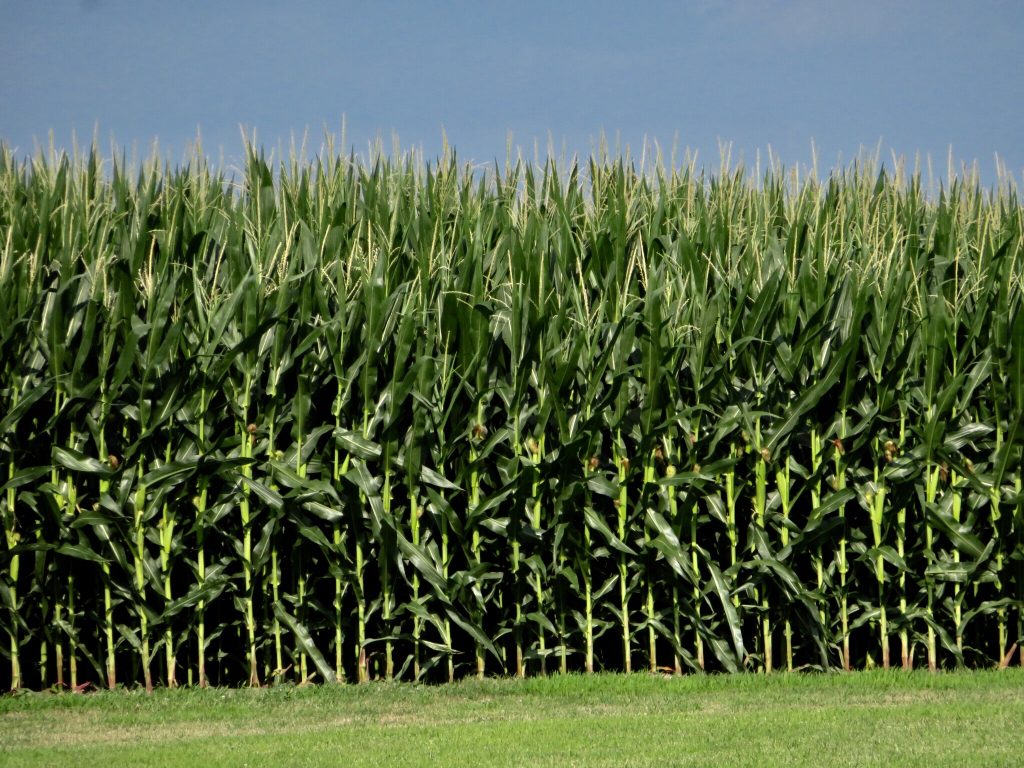 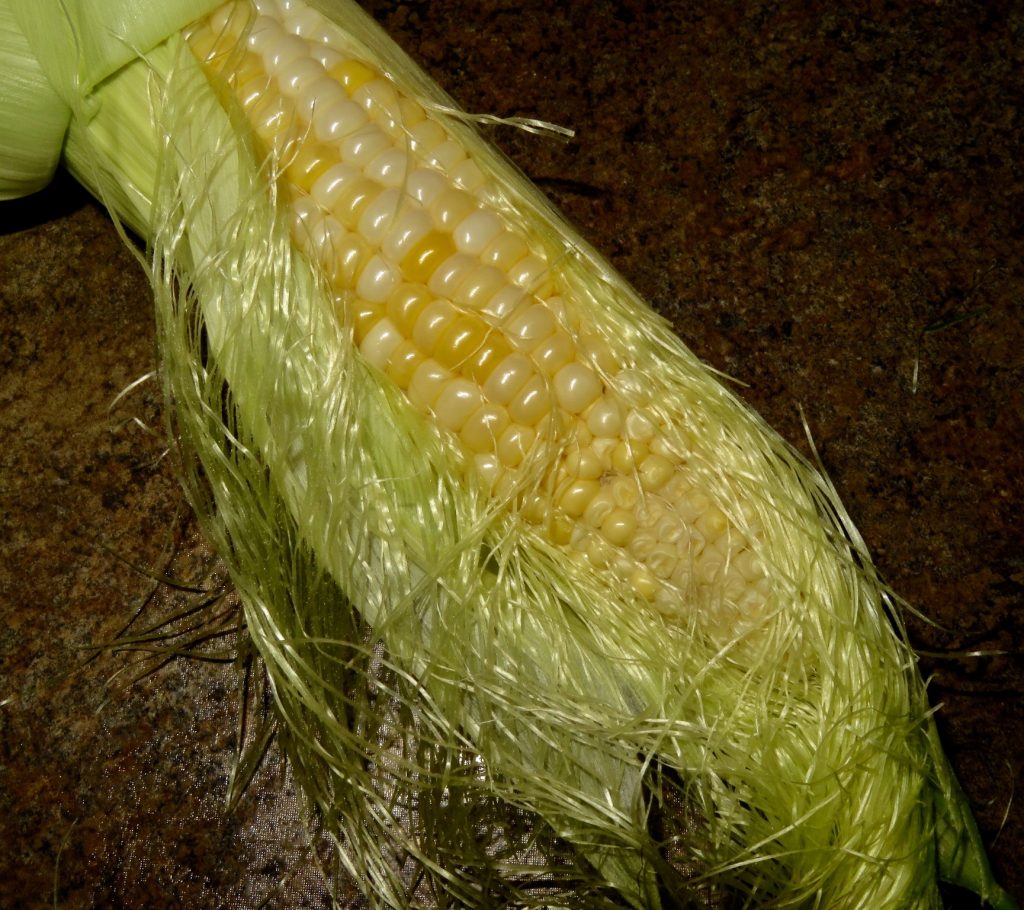 Lincoln:
Illinois’ motto is Land of Lincoln, so we headed next to where Abraham Lincoln lived before he became president (in central Illinois). At the beginning of our trip (way back in May), we visited Lincoln’s birthplace and boyhood home in Kentucky. We’ve also been to Ford’s Theatre in Washington, D.C., where Lincoln was shot, and Petersen’s Boarding House, where he died the next morning. So it was fitting that we take this opportunity to visit places where Lincoln lived between his childhood and death.

Lincoln’s New Salem State Historic Park re-creates the small village of New Salem where Lincoln lived in his 20s, working at multiple odd jobs, including co-owning a store, being a surveyor, and getting elected to the Illinois State Legislature. This is also where he read law books and began to practice law. 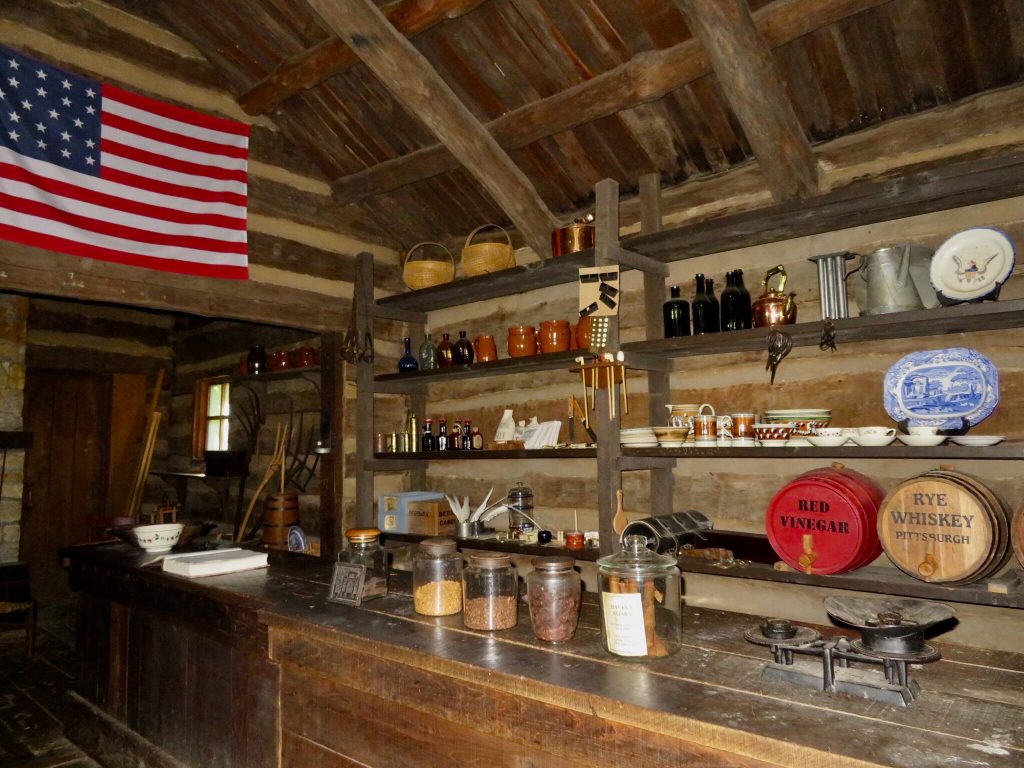 Springfield is where Lincoln really made a name for himself prior to being elected president. He actively practiced law in Springfield, often trying cases before the Illinois Supreme Court, and Springfield is where he met and married Mary Todd and where their 4 sons were born. It is where he ran for the U.S. Senate (and lost), and where one of his famous debates with Stephen A. Douglas took place.

So to Springfield we went. The fairly new Abraham Lincoln Presidential Library and Museum was a terrific place to start and very well done with interactive, modern exhibits that detail Lincoln’s life before and during his White House years. 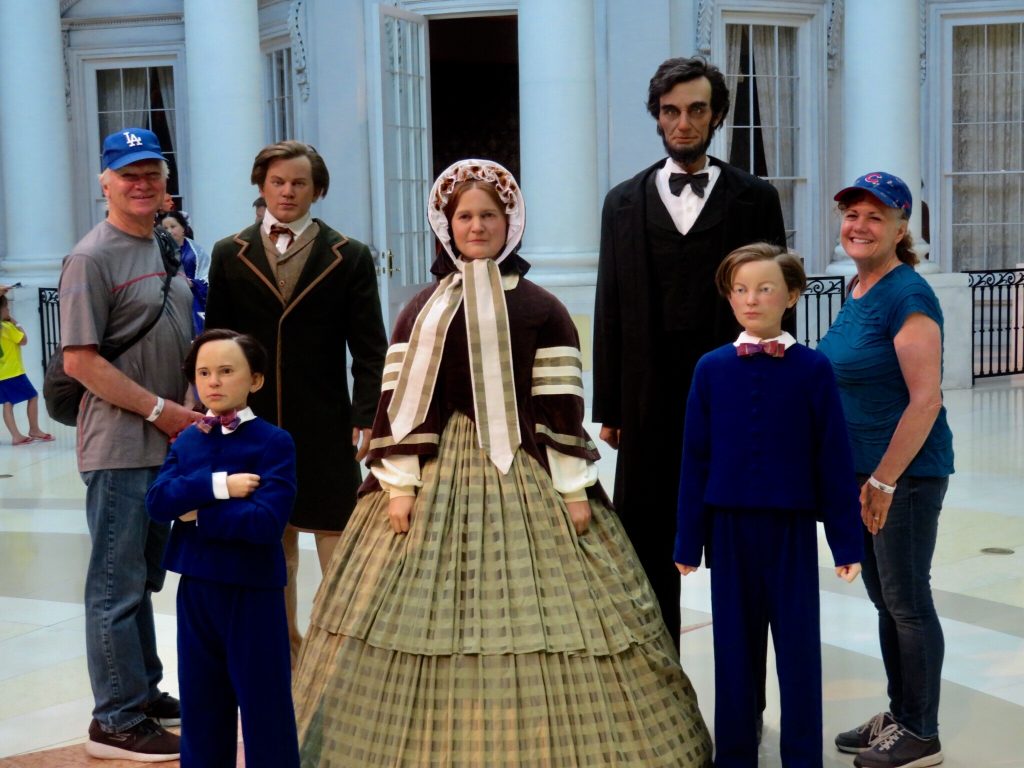 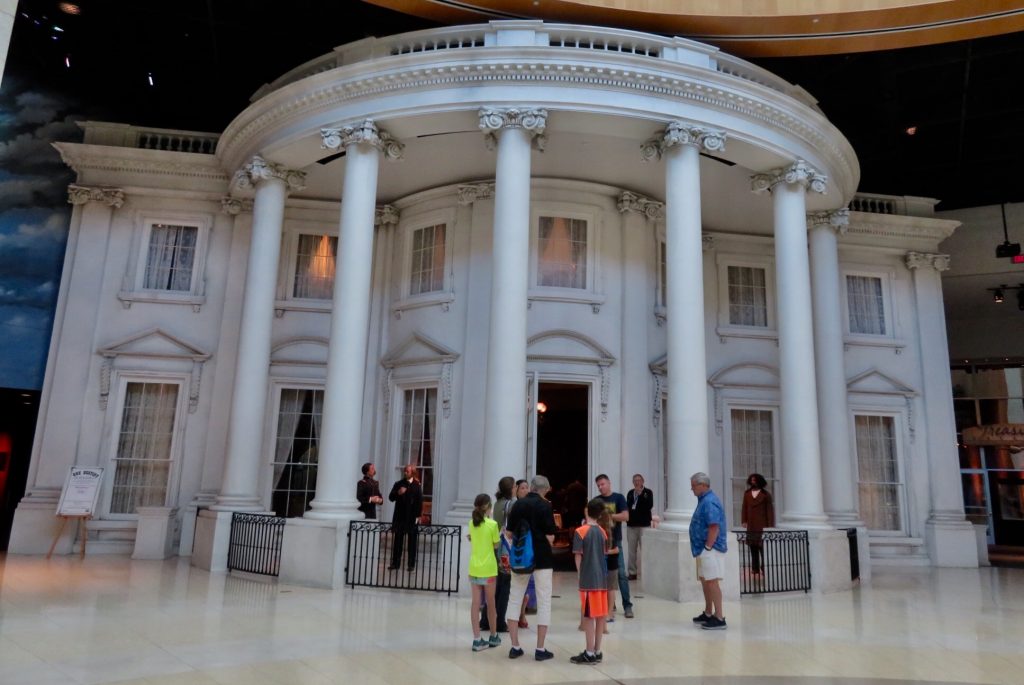 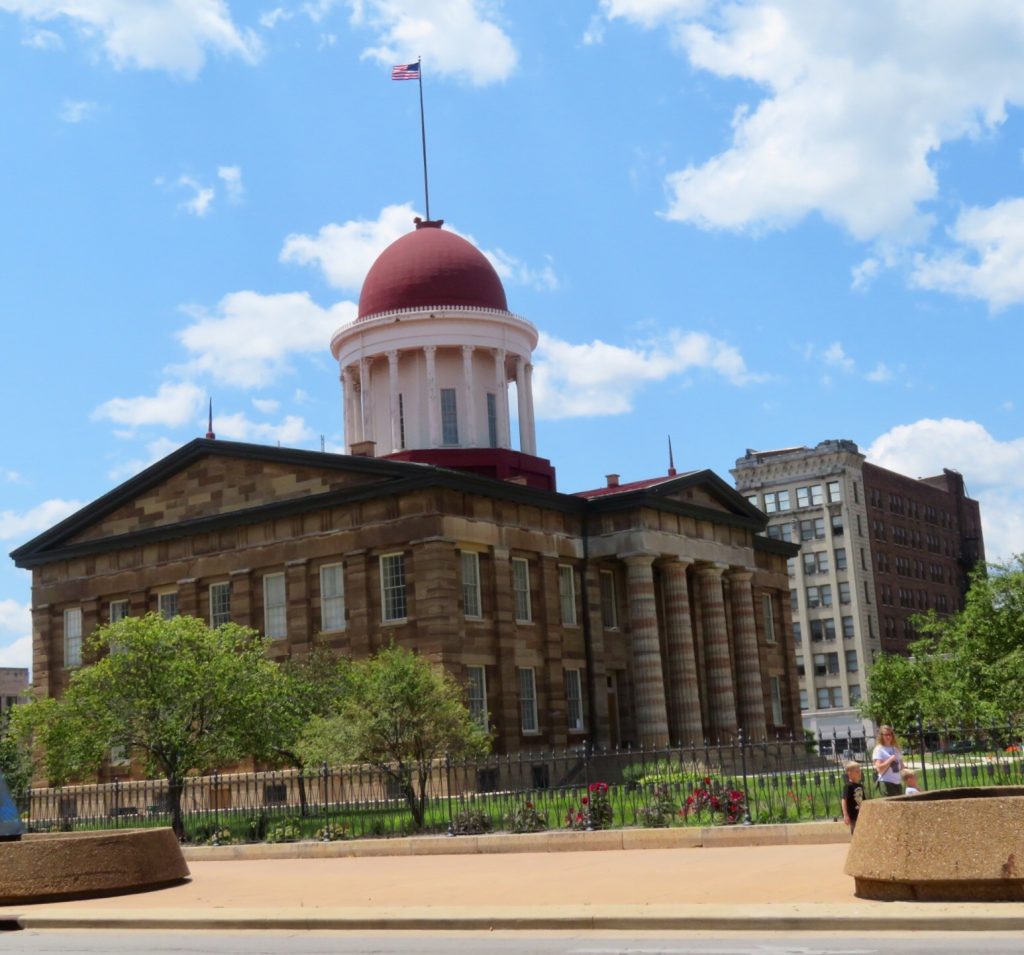 We also took a short walk to the “new” Illinois State Capitol, in use since the 1870s, with much bigger chambers and gorgeous interiors and exteriors. It’s the tallest non-skyscraper capitol building in the country and is even taller than the U.S. Capitol in Washington, D.C. They give free guided tours and they’re well worth doing, as you learn a lot about the paintings, murals, statues, and offices in the building. 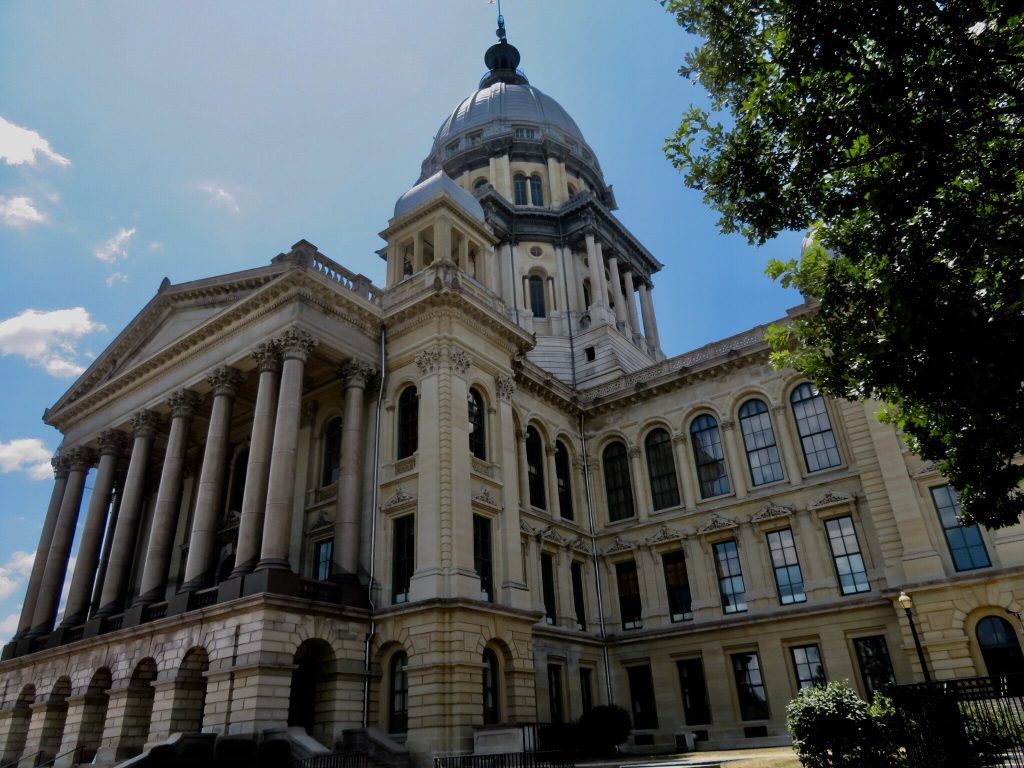 We also walked to the Lincoln Home National Historic Site, run by the National Park Service, and they do terrific (short) guided tours of the home (tickets are free but you have to get them in advance of the tour—we just walked right up because it wasn’t crowded). They even have re-created the wallpaper that Abe had in his bedroom. Lincoln lived most of his adult life in Springfield, after he left New Salem in 1837 until he moved to the White House in 1861, so it was interesting to see this place where he spent so much time. 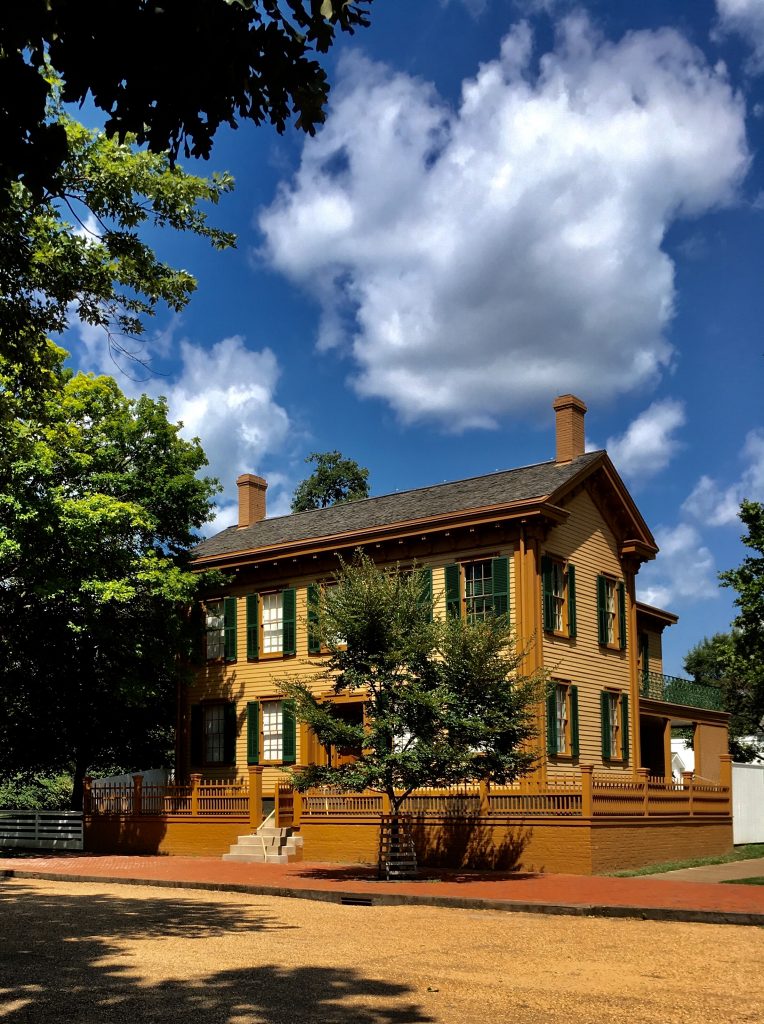 We ended our time in Springfield by visiting Oak Ridge Cemetery, where Lincoln, his wife, and three of his four sons, are buried. It was a fitting way to end our time in Illinois, the Land of Lincoln (and Cubs and Corn). 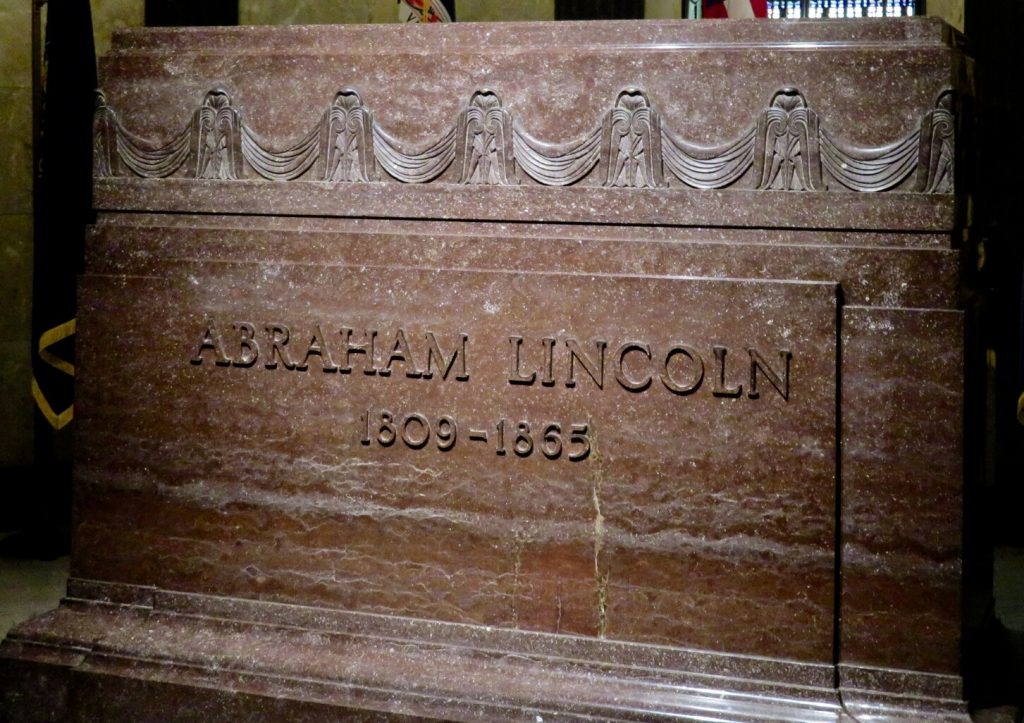 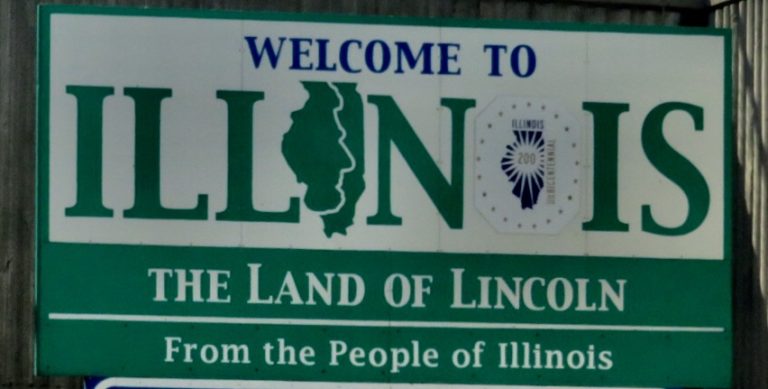