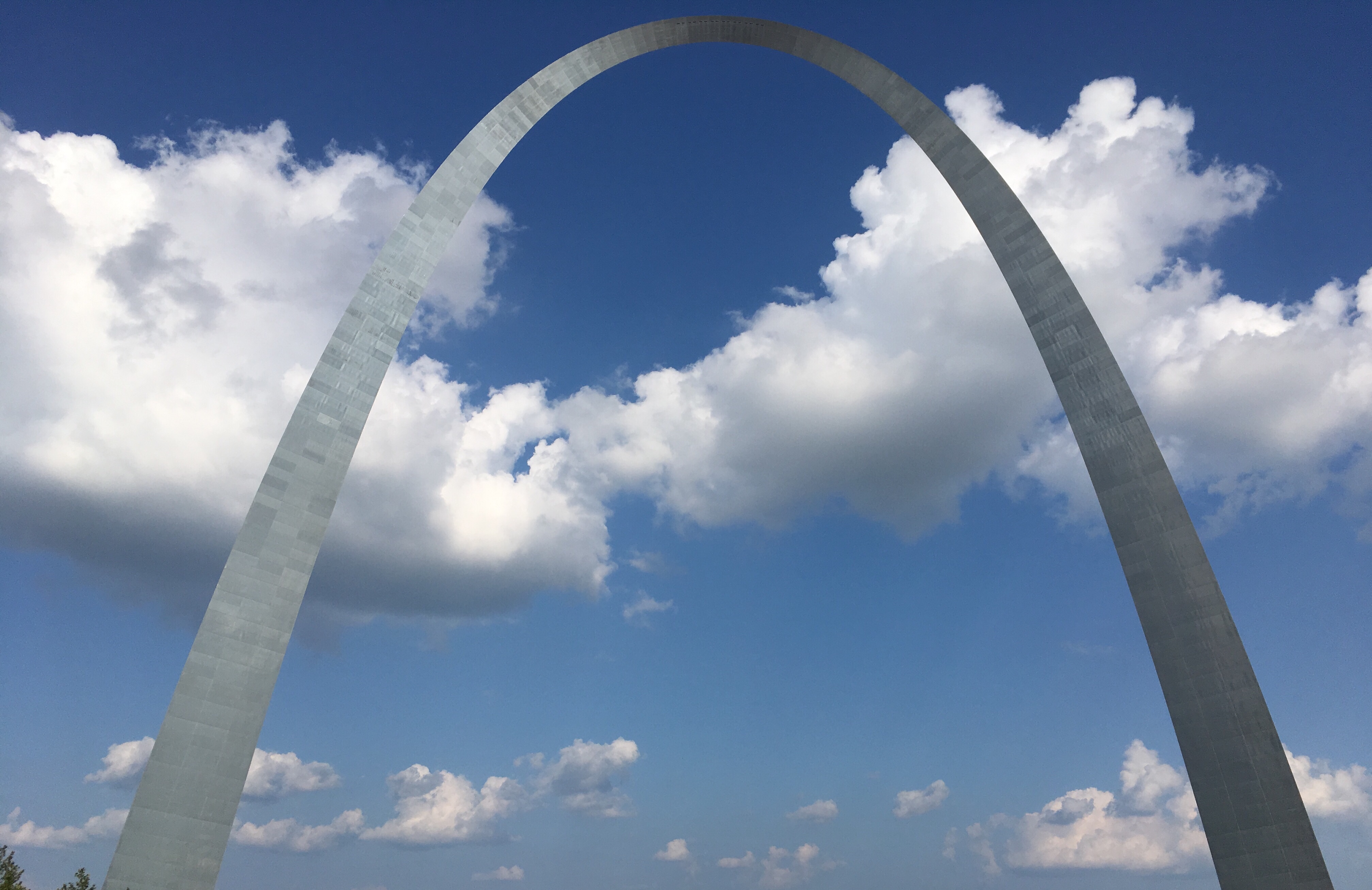 Missouri:
When we headed east at the end of April, we passed through southern Missouri to visit Laura Ingalls Wilder’s home in Mansfield. On our way west toward home, we came through a little further north, St. Louis to be exact.

St. Louis has been a significant transportation and shipping hub because of its location at the confluence of the Mississippi and Missouri Rivers. It was long considered the Gateway to the West, and it was from this area that Lewis and Clark embarked on their historic exploration of the Louisiana Purchase.

Our exploration was a little more tame. We visited the Gateway Arch National Park (which became a national park in 2018 and was formerly the Jefferson National Expansion Memorial), which has two key parts.

First, we visited the Old Courthouse with its beautiful architecture and historical significance. This is the courthouse where two decisions related to the Dred Scott case were handed down. It was here that Dred Scott and his family were declared free from slavery in 1850 by the Circuit Court of St. Louis County. Unfortunately, the Missouri Supreme Court (1852) and the U.S. Supreme Court (1857), to their shame, overturned the Circuit Court’s decision and found that Dred Scott and his family were still enslaved because they were “property.” 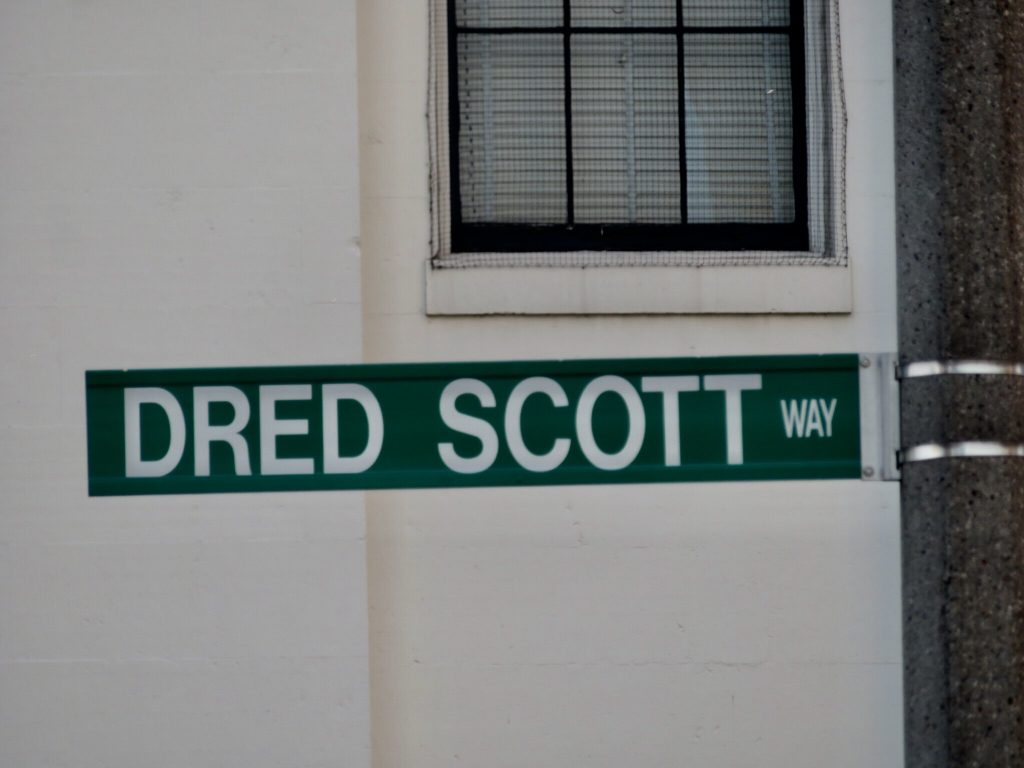 On to a happier portion of the national park, the arch itself. Conceived in the 1940s and built in the 1960s, it is the world’s tallest arch and the tallest man-made monument in the Western Hemisphere. The arch represents the role St. Louis played in Westward expansion, and the newly-renovated museum does a beautiful job of illustrating the timeline and significant events over the past several hundred years.

The arch is stunning with hundreds of equilateral triangles covered with shiny stainless steel for its entire 630 feet up. Watching the movie of the construction of the arch gives you a sense of the enormity of this task. Riding the tram to the top of the arch and looking out on St. Louis below gave us a very different perspective on the city, the Mississippi River and the arch itself. 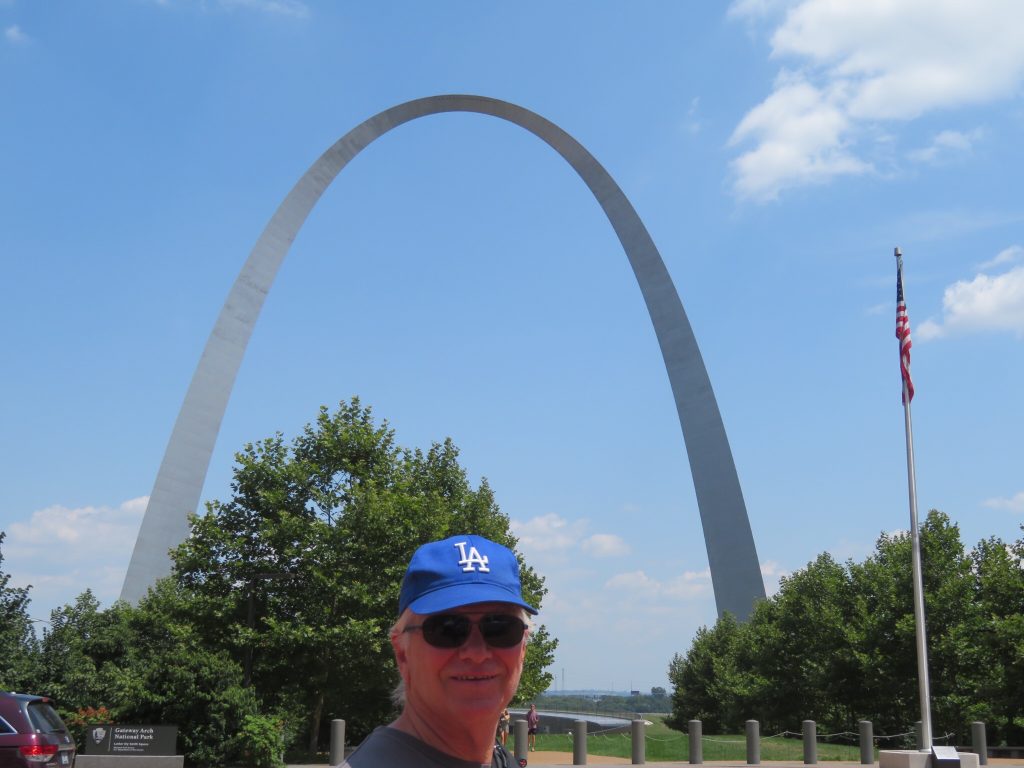 Kansas:
A stop at Clinton State Park near Lawrence, Kansas, gave us a chance to watch turkey vultures and listen to cicadas, plus make a quick trip to KU (University of Kansas), a friend’s alma mater. 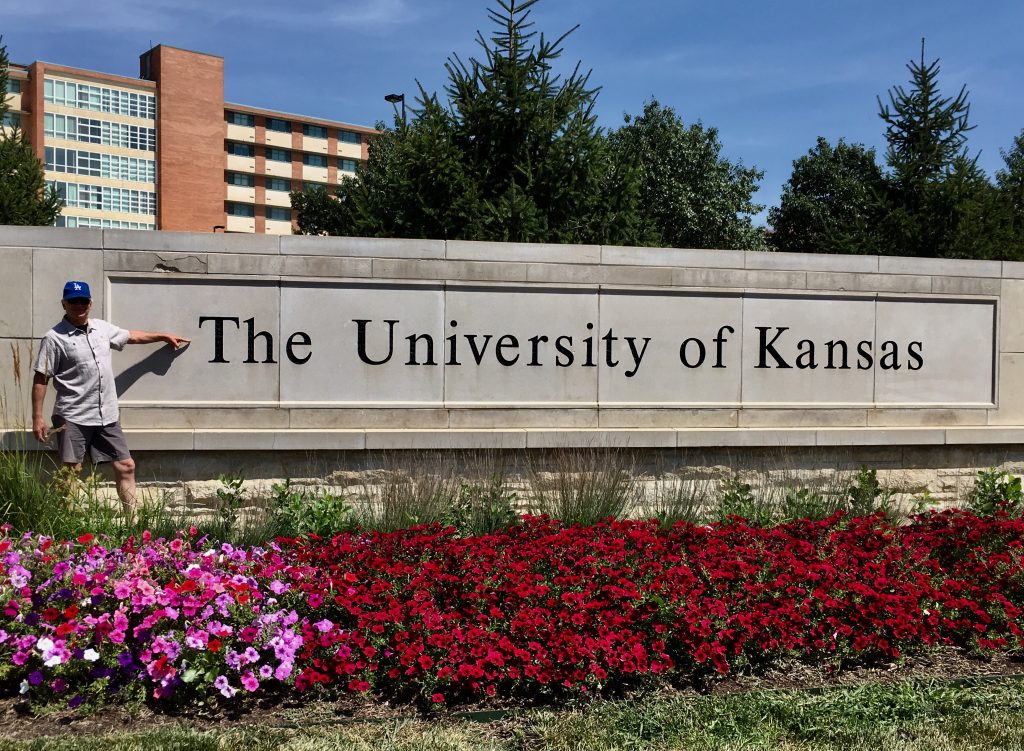 We were definitely back in the land of barbecue, fried pickles, and Freddy’s Frozen Custard.

Colorado:
We continued our love affair with American state parks, enjoying three nights in Cherry Creek State Park outside of Denver. This was a wonderful opportunity for us to visit with Joan (Cindy’s stepmom) and her nephew Tom, who spoiled us with great meals.

We also got to fit in a beautiful scenic drive through Rocky Mountain National Park, enjoying the wildflowers, wildlife (marmot and elk), waterfalls, and stunning views of the mountains themselves. What an unexpected treat! (This was our 7th American national park of this trip!) 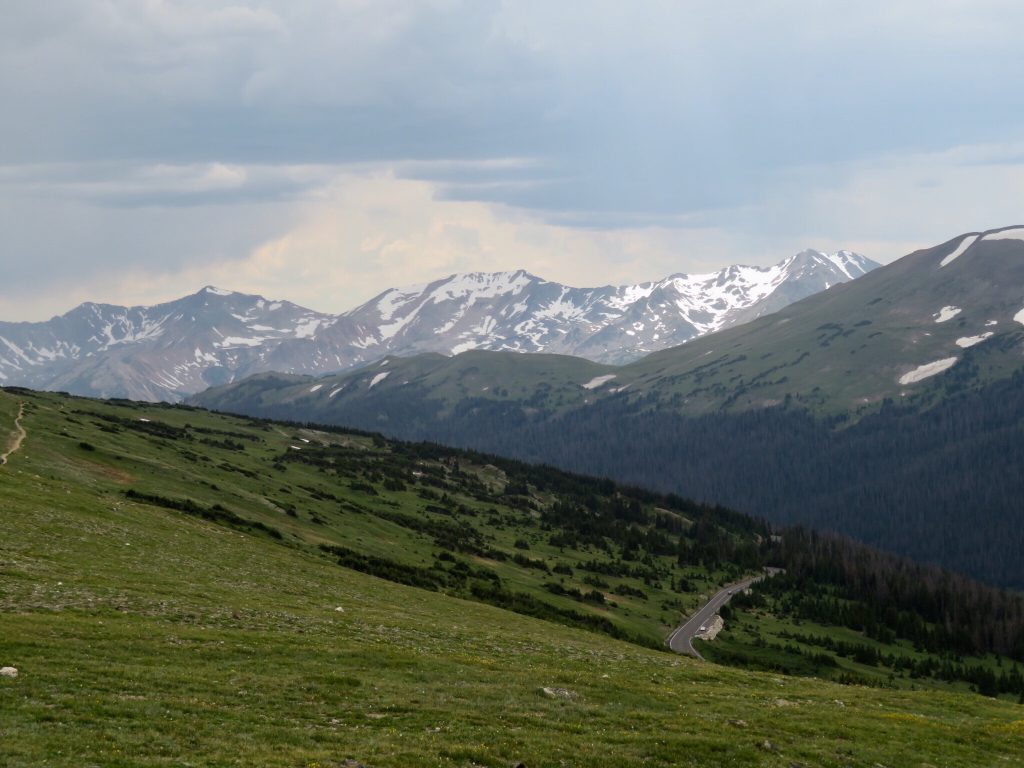 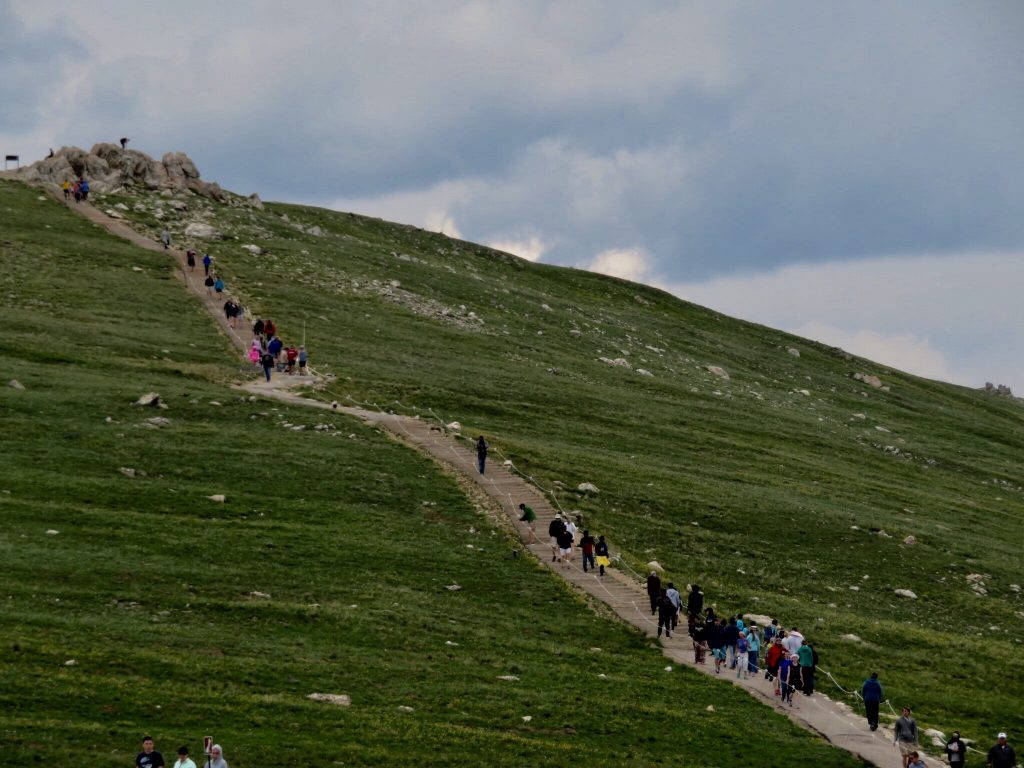 Leaving the Denver area, Hank did a great job of driving the motorhome along Interstate-70 through the Rocky Mountains, where we chugged our way up and over the pass at the Eisenhower Tunnel, elevation 11,158, the longest mountain tunnel and the highest point on the interstate highway system in the U.S. 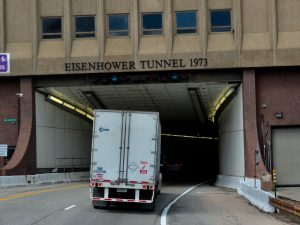 We headed down the mountains into Fruita in western Colorado to camp at another lovely state park, James M. Robb Colorado River State Park. This park put us adjacent to and in view of Colorado National Monument, the last big place we planned to visit on this trip.

We had last been to Colorado National Monument back in 1991, just for a couple of hours, so it was a treat to come back and spend a little more time here. We loved the striking scenery of the red rocks and fanciful formations. 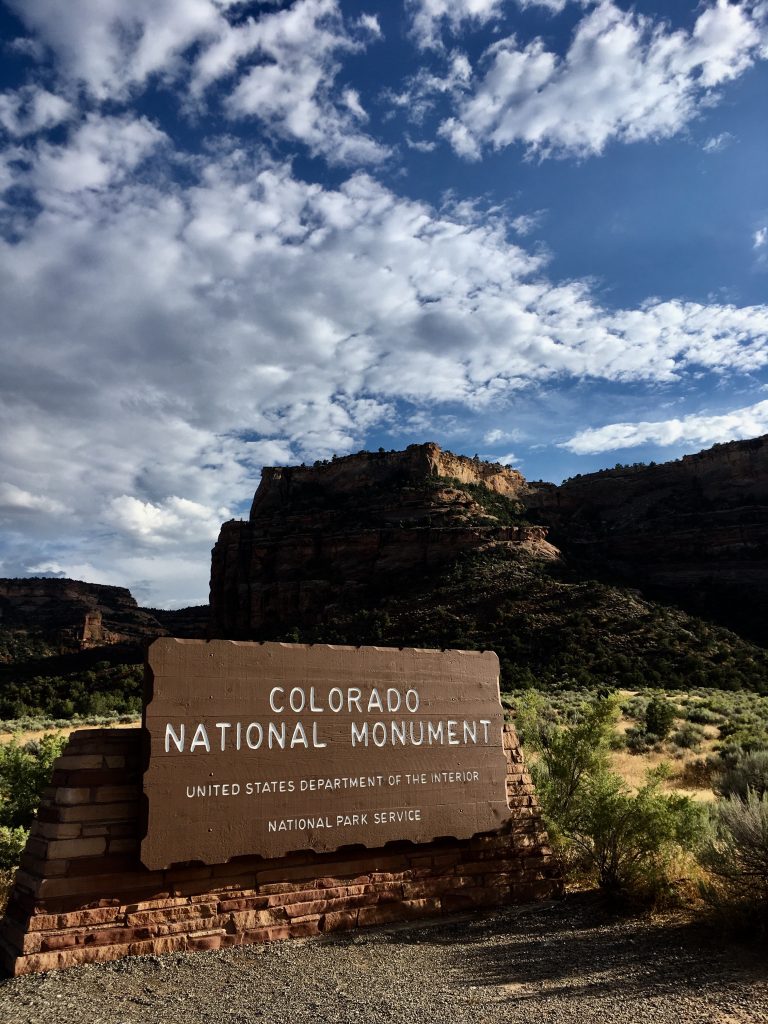 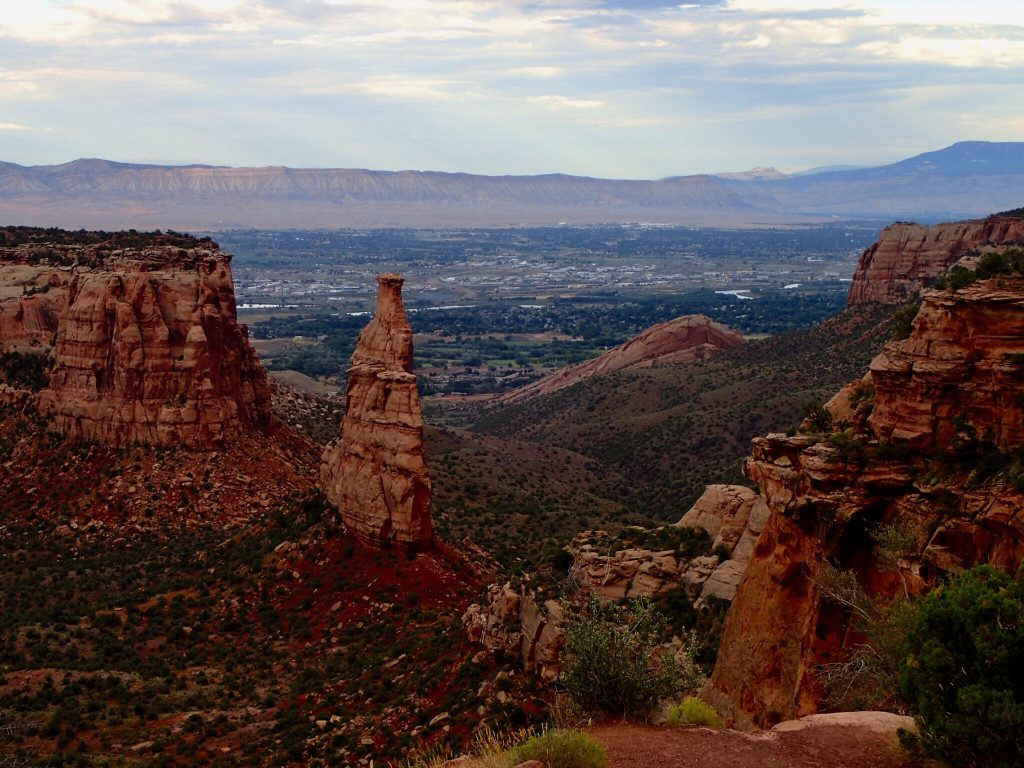 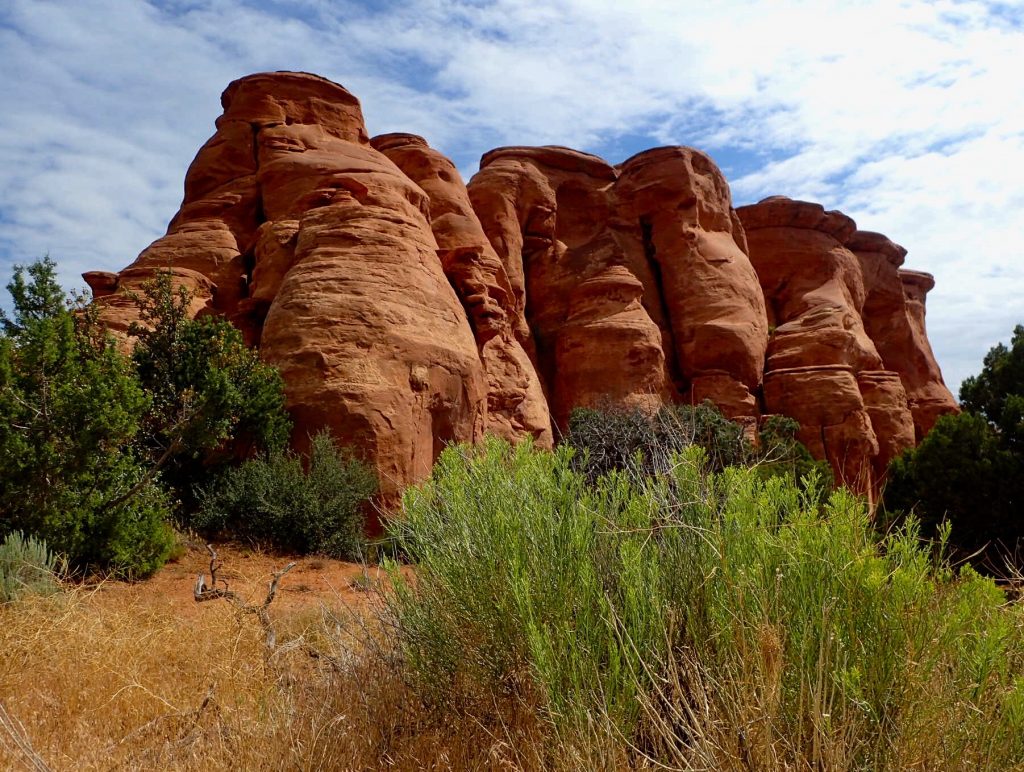 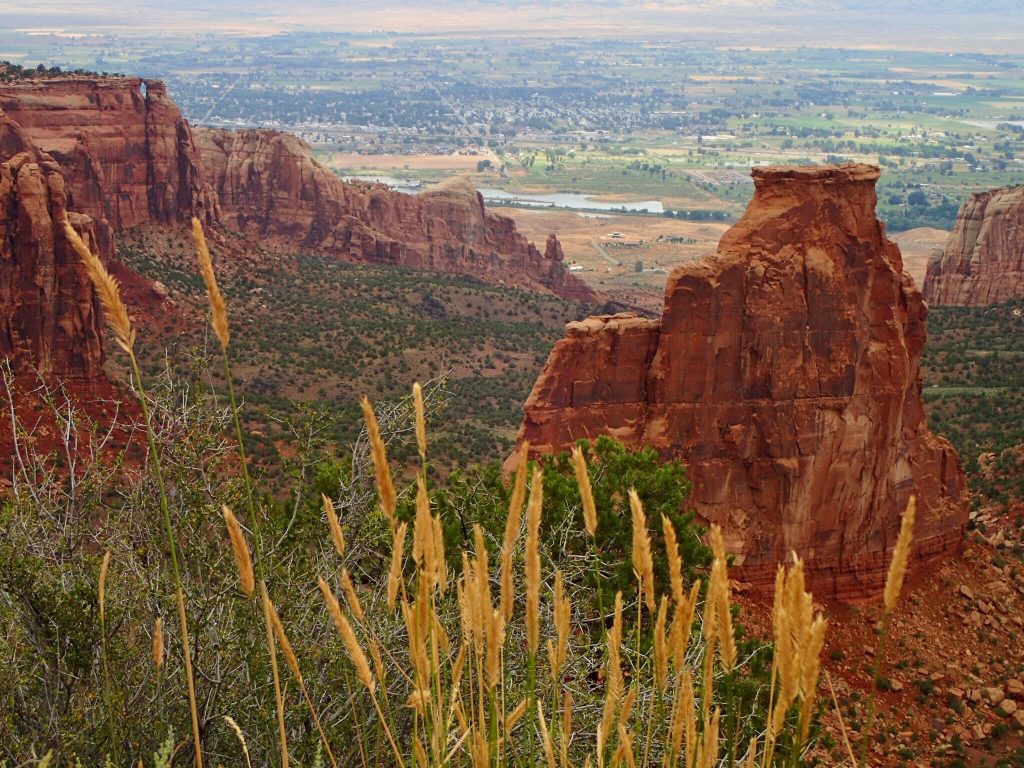 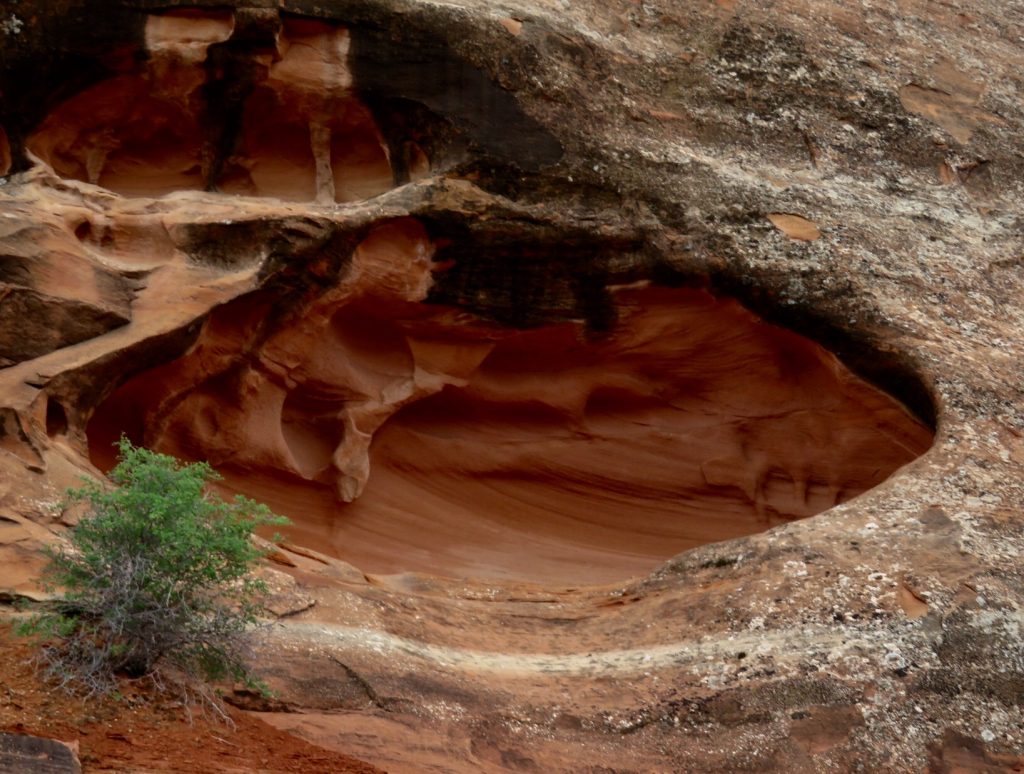 And of course, we loved seeing the critters, especially the desert bighorn sheep that hung out on the side of the road and by the visitor center. 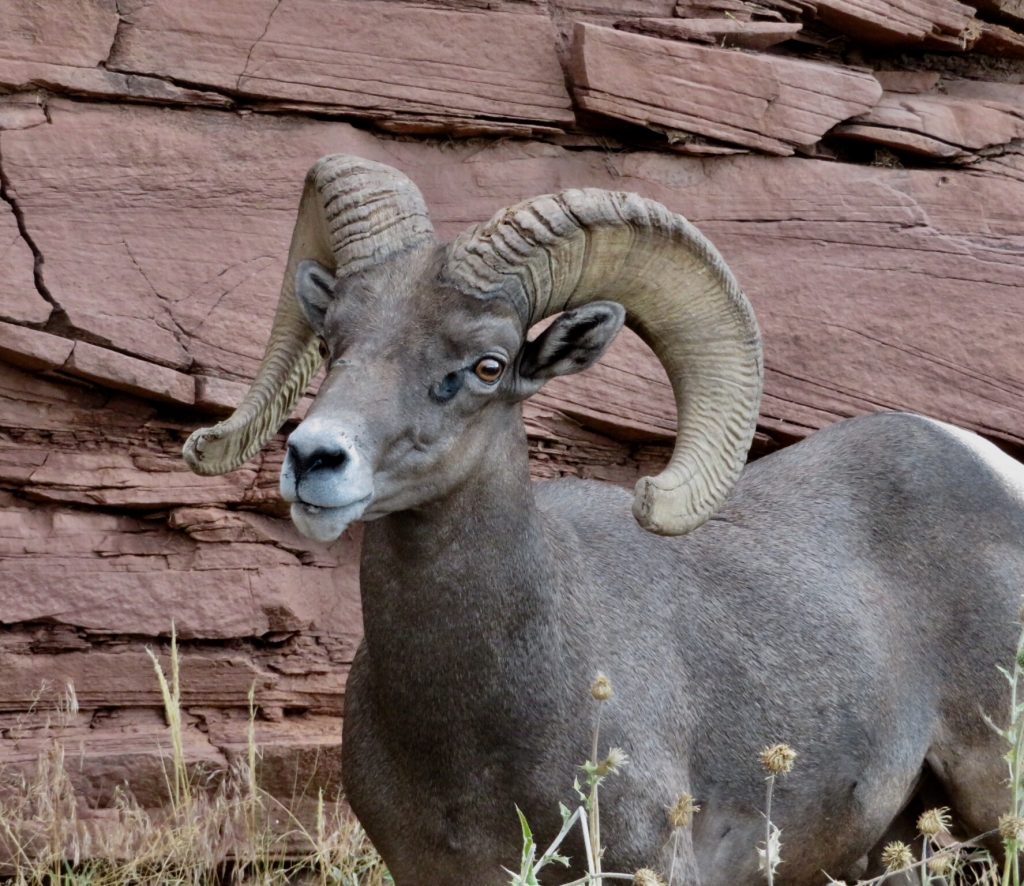 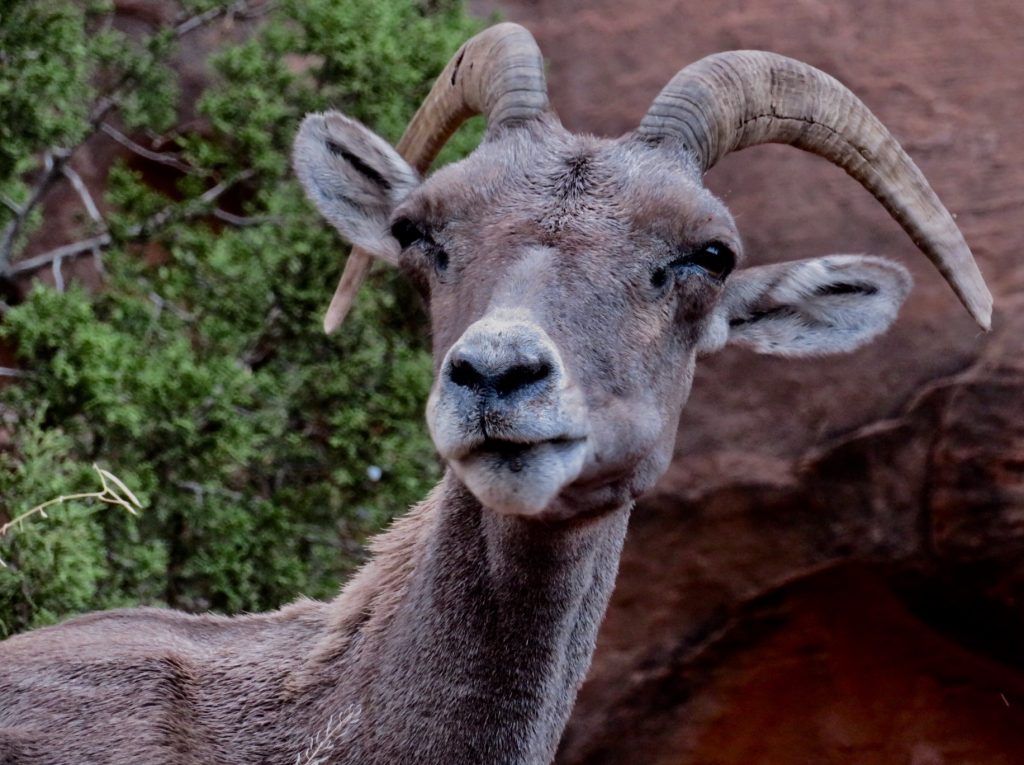 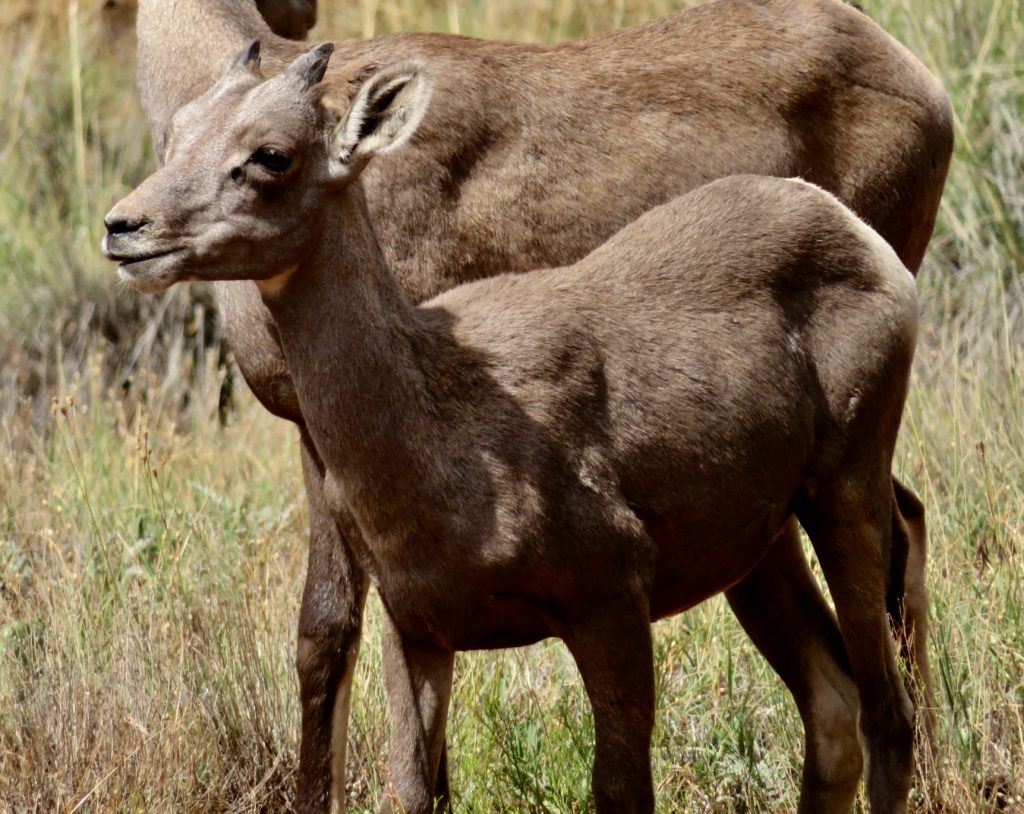 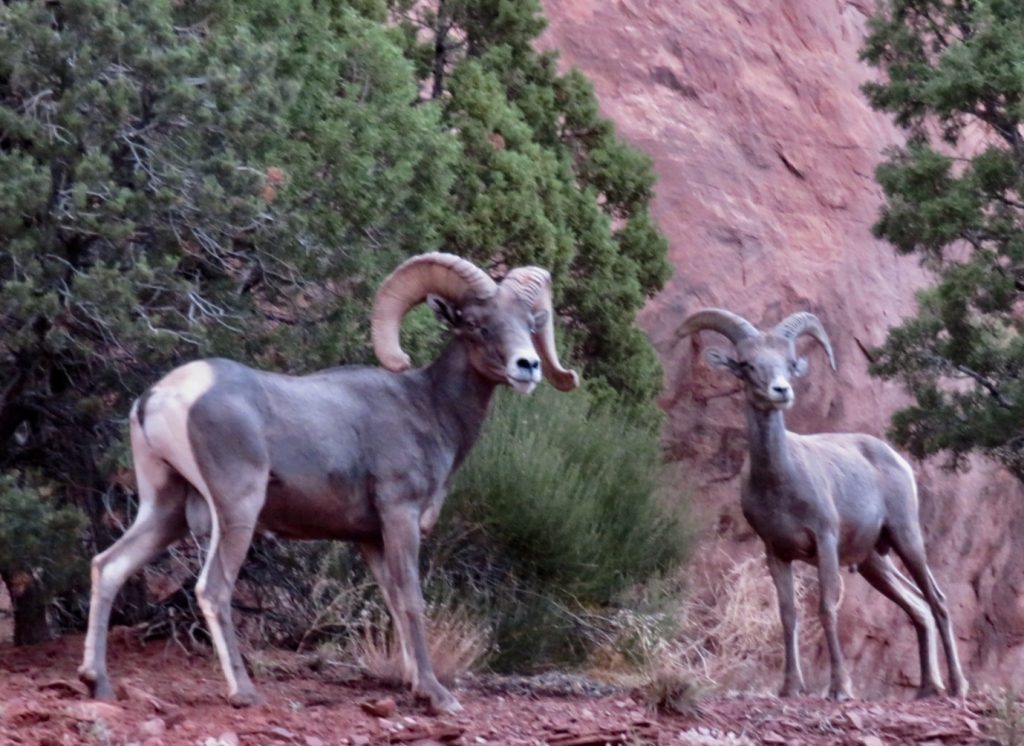 We’re getting lazy, so no hiking or biking here (plus it was really hot), but the scenic drive was spectacular.

We can’t believe our trip is winding down. Our next post will probably be a wrap-up of the whole trip, all 15 weeks! Stay tuned.