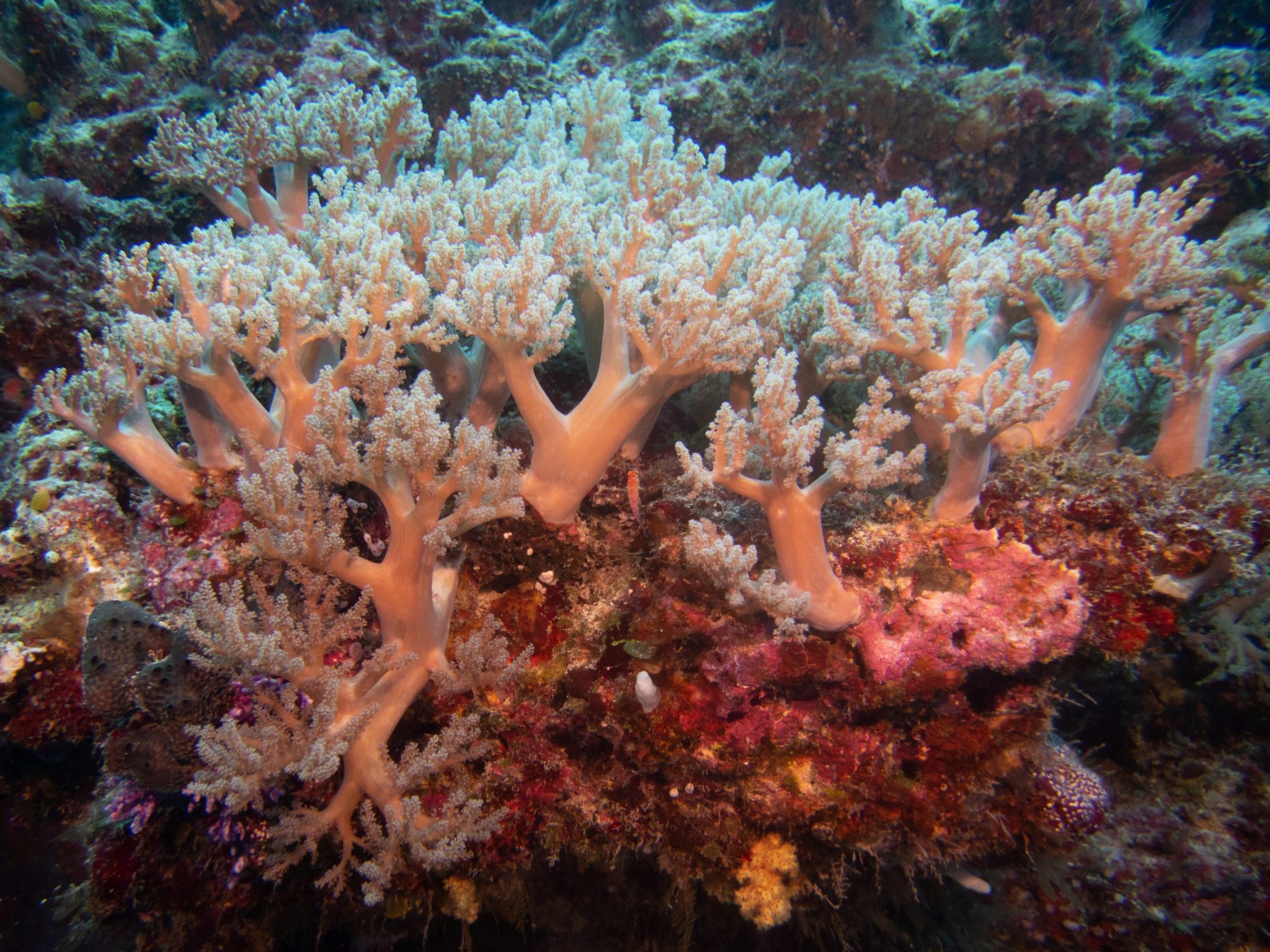 Our first post was getting a bit long, so here is Part Two of our description of Palau and its wonderful diving. In the first post (Diving in Palau–Wow! [Part One]), we described the earlier dives of our trip, along with excursions to Jellyfish Lake and Milky Way. Here we pick up with our last few dives, some history of the World War II Battle of Peleliu and some general sights of the trip.

11. Yellow Wall (Peleliu) – Peleliu is almost the last (southernmost) island in the Palau chain, and it is known for beautiful wall and reef diving, as well as historic World War II sites (see below for some Peleliu history and pictures of our land tour there). Some of the most famous Peleliu dives were out of reach for us because the currents were just too strong on the day we went there. But Yellow Wall (named for the golden yellow tube corals) was a gorgeous drift dive that offered huge variety.

12. Honeymoon Beach (Peleliu) – this drift dive offered terrific visibility, a Spotted Eagle Ray and more turtles. I had some problems with my dive computer, so the dive was a bit short for us, but lovely nonetheless. 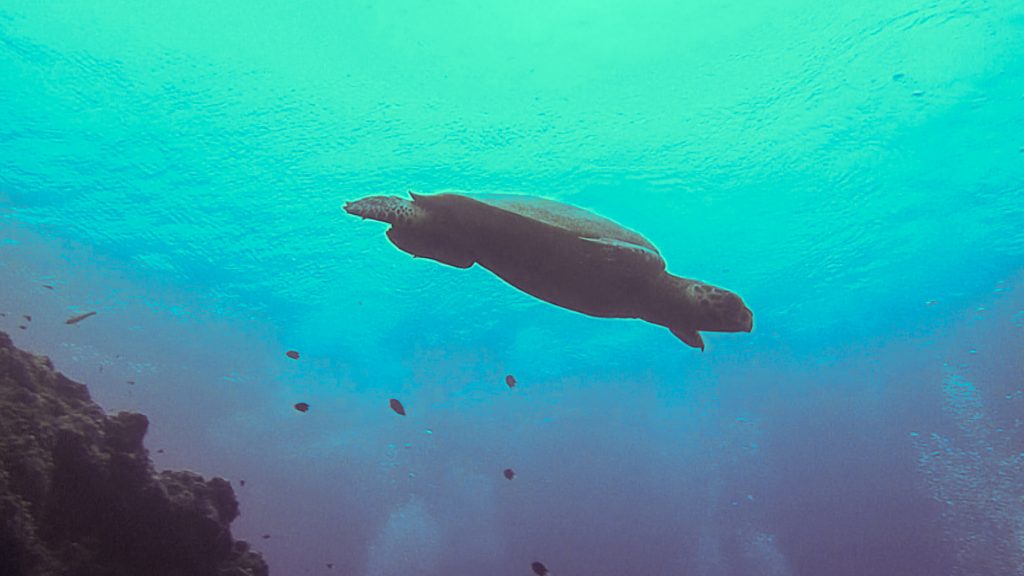 13. Blue Holes to Blue Corner – The current was too strong for us to repeat our Blue Corner dive with reef hooks, but we got to experience the famous Blue Holes as we approached Blue Corner from the opposite direction. This was a lovely drift dive with lots of large fish, including more sharks.

Highlights:
• Blue holes–four vertical shafts on top of a reef that lead to a large cavern
• Common lionfish (one of only a few we saw in Palau)–they’ve unfortunately all moved to the Caribbean where they don’t belong
• Gray reef sharks (we never get tired of watching these guys)
• Golden Spadefish–juvenile

14. German Channel (3rd time) – There was some grumbling when our dive guides recommended that we return to German Channel for our final dive of the trip. We had been there twice before and the visibility had not been great. The guides suggested we check it out and make a decision once we got there, so we agreed. They did a bit of snorkeling and determined that the visibility was much better than on the previous dives. This was our final chance to see Manta Rays, so we took the plunge. Our guides settled us at the first cleaning station where we watched Gray Reef Sharks and Whitetip Reef Sharks entertaining us as they let smaller fish clean their mouths. Then we moved on to a second cleaning station, and I prayed for 1 or 2 manta rays—just 1 or 2 to end our trip. We settled into the sand and waited. After about two minutes, we looked to the right, and there it was, the biggest, most beautiful manta ray we had ever seen. It was joined by a second manta, and we watched their glorious ballet around the pinnacle as we sat very still in the sand. What a fantastic ending to a great week of diving!

Historical Land Tour of the Island of Peleliu – After our two dives near Peleliu, our boat dropped us off in the small town on the island where we were greeted by Fix, our local guide (yes, that really was his name, but he told us that he wasn’t good at fixing things). Fix grew up on Peleliu and introduced us to the local historical sites around the small island where 500 people currently reside. The island is famous for a prolonged WW II battle between the Japanese and U.S., and continues to be the subject of controversy, with some arguing that the battle was unnecessary in the ultimate defeat of Japan. 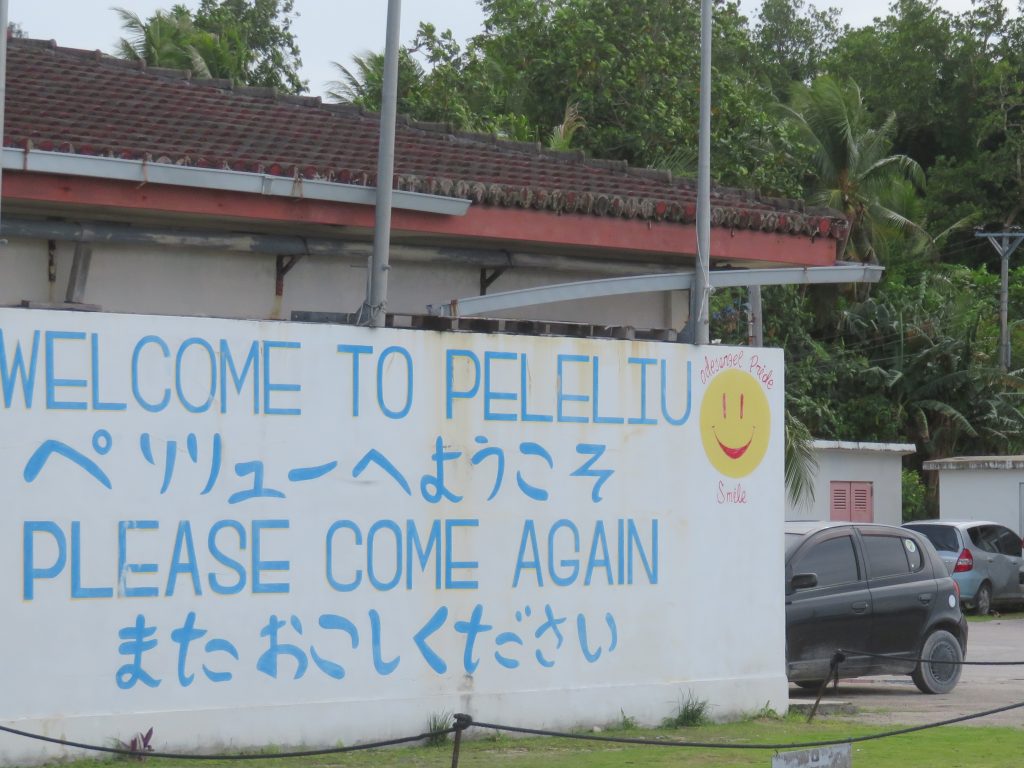 Following World War I, when Japan was given control of Palau by the League of Nations, the Japanese felt that they had been slighted in the apportionments they received. They soon began building a network of fortifications, cannons, cave systems, underground passages, and structurally-solid facilities, creating a secret military presence by forcing the native people to work as laborers. Prior to World War II, all Palauans on Peleliu were forcibly relocated to other parts of Palau, so that the entire island of Peleliu was inhabited only by Japanese military forces for most of the war.

The U.S. military made the decision to take Peleliu in 1944 on its way to recapturing the Philippines because it had a strategically-placed airstrip. What they thought would be a four-day battle lasted over two months because the Japanese changed their tactics and it took the Americans a while to adjust.

We were able to visit the beaches where the Americans made landfall, including Orange Beach, and we visited the memorial where 1000 American soldiers were originally buried (later their bodies were moved back to the U.S.). 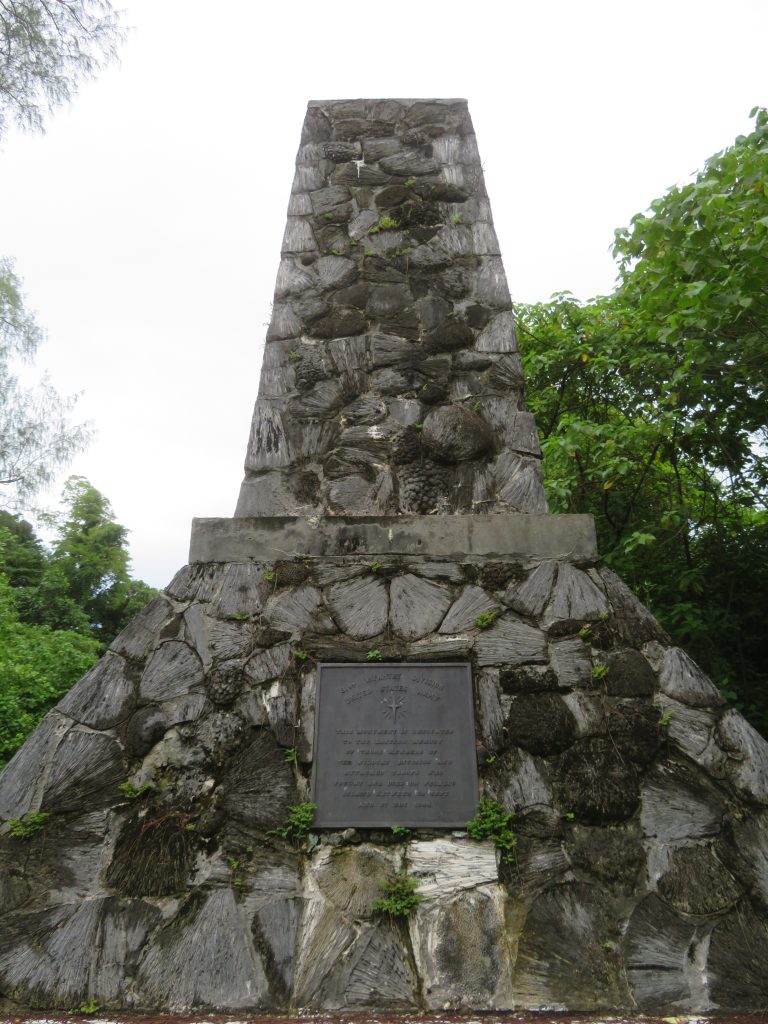 We also visited the Japanese airstrip, one of the first targets of the American offensive, and saw the ruins of both Japanese and American tanks, which remain where they were destroyed on the island.

The Japanese headquarters building was heavily-fortified and only partially damaged in the American bombing campaign that preceded the invasion, and most Japanese soldiers survived the initial attacks because of their hiding places in cave systems.

Eventually most of the 11,000 Japanese soldiers on the island were killed or committed suicide, but it took more than two months to accomplish (September to November 1944), and American casualties were some of the highest of any battle in the Pacific.  Wikipedia and other sources claim that Peleliu had the highest casualty rate for US forces in an amphibious operation during the entire Pacific War. To this day, historians argue about whether the battle was even necessary.

In 1952, the original inhabitants of Peleliu, who had been relocated to other parts of Palau by the Japanese, were allowed to return to the island, but basically had to start over, since all vegetation and structures had been destroyed by the American bombing and invasion. Fix’s grandparents were some of those who returned to Peleliu in 1952, though much of his family now lives in the U.S.

2019 was the 75th anniversary of the American invasion and liberation of Peleliu, and a new monument was just opened on the south end of the island, honoring the U.S. Marines who were the first to come ashore. 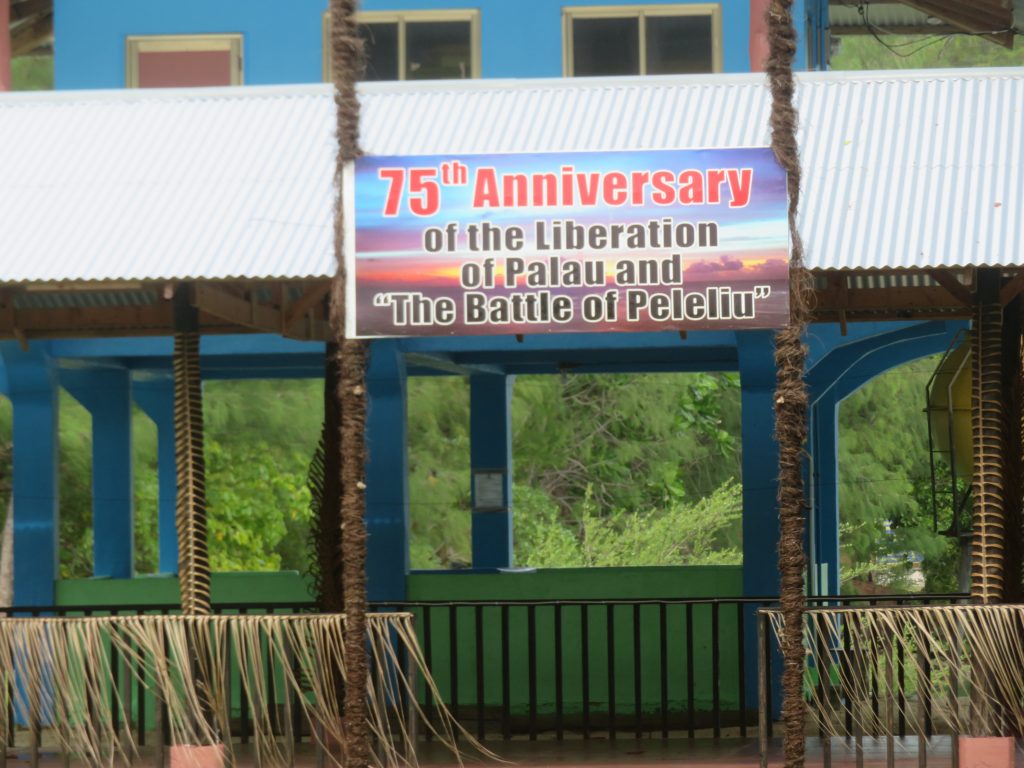 While reflecting on this solemn (and little-known) event that took place on Peleliu in 1944, we headed back to our hotel with a beautiful sunset over the Rock Islands. For more information on the Battle of Peleliu, I recommend William Manchester’s memoir, Goodbye, Darkness: A Memoir of the Pacific War. He has a whole section on Peleliu, which I had never heard of until I read his memoir. 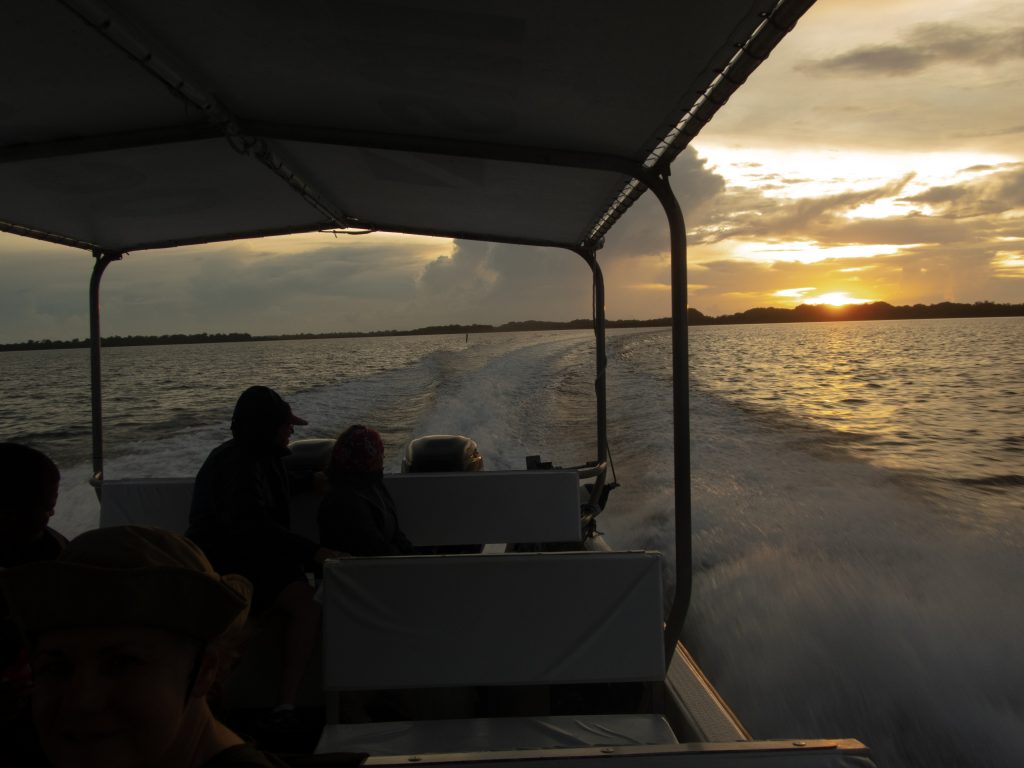 Since the purpose of this trip was to go diving, most of our time was spent diving or heading to dive sites on the Fish ‘n Fins boat (dive sites were generally about an hour away from town by boat), enjoying the beautiful Rock Islands along the way. 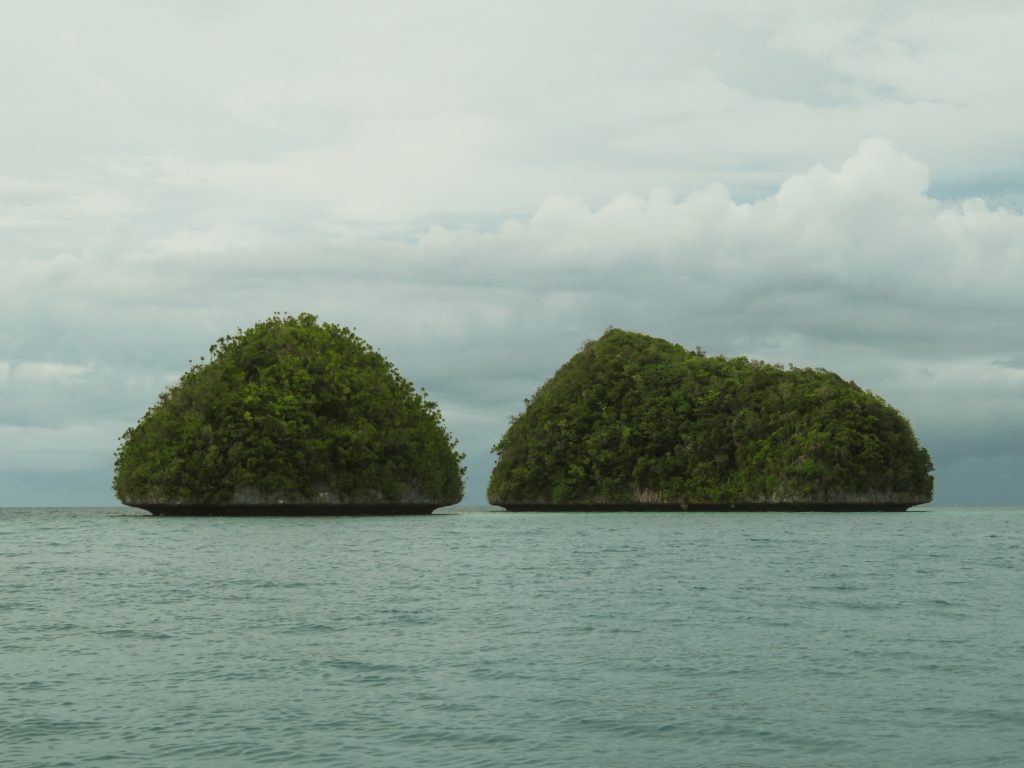 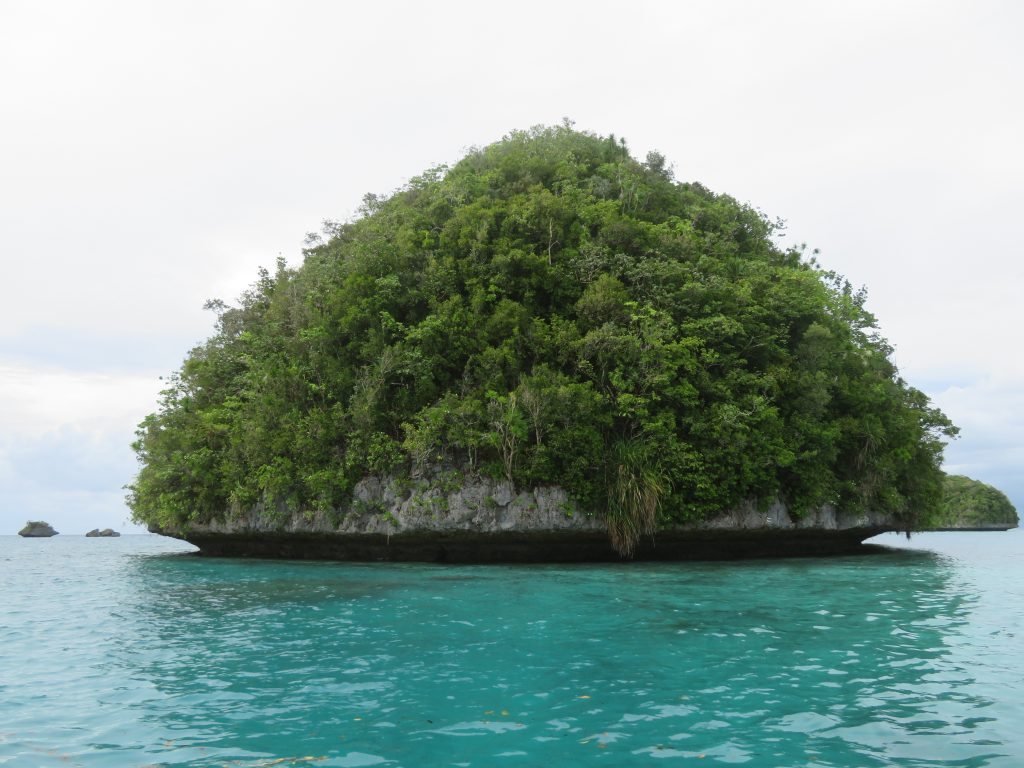 Back on land: But when we were on land, we greatly enjoyed the beautiful surroundings of the Palau Pacific Resort. The beach, pool, breakfast room and lobby were lovely and the staff incredibly nice. Of course, we also had to check out the spa and got amazing massages. 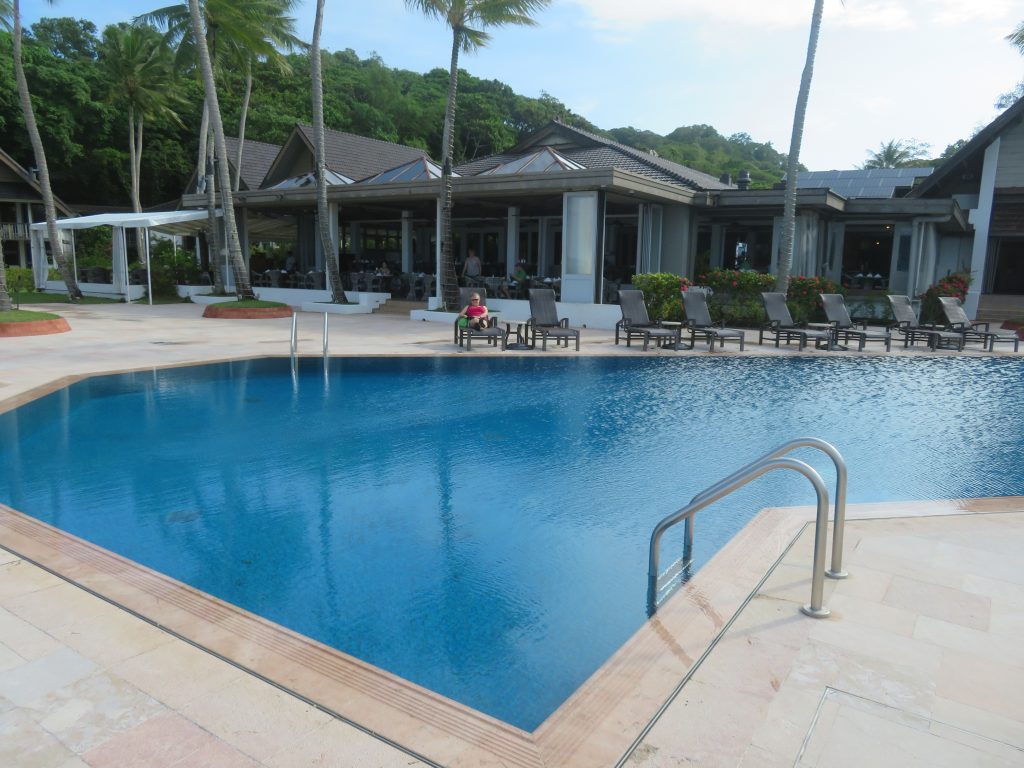 One of our group, Linda, is a yoga instructor in real life, so she led us in airport yoga, chair yoga, pre-diving yoga and ocean yoga at every opportunity. These stretches kept us limber and healthy throughout our lengthy travels, bumpy boat rides and numerous dives. Thanks, Linda! 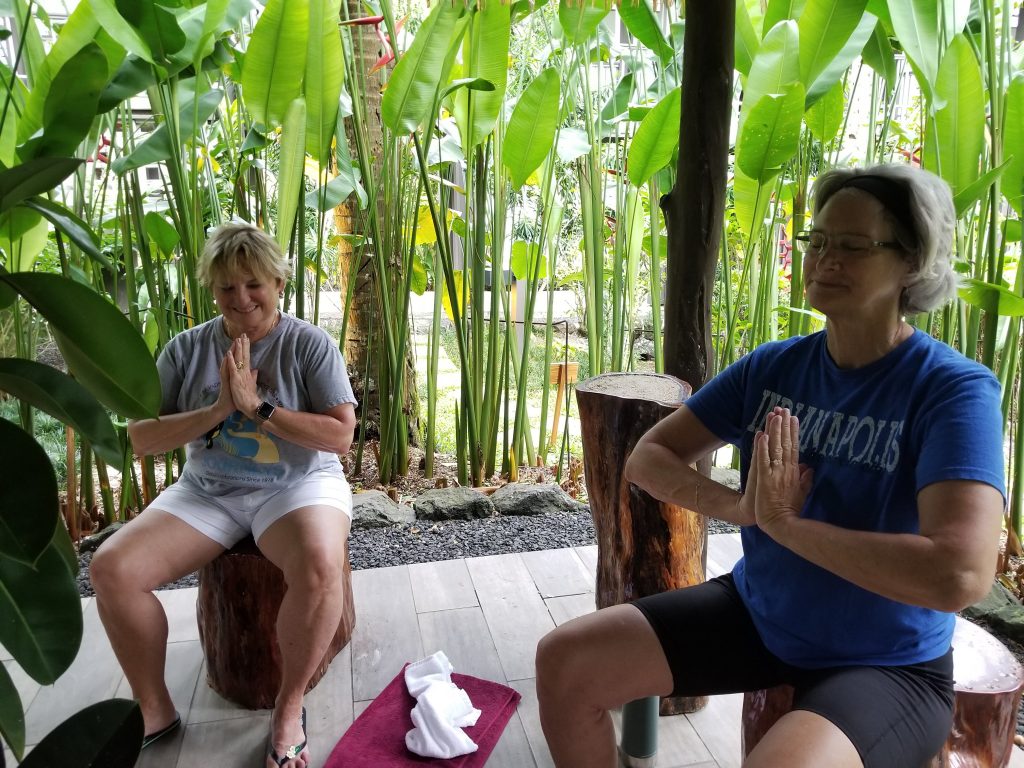 A few of us ventured onto the nearby nature trail, with panoramic views of the surrounding islands. 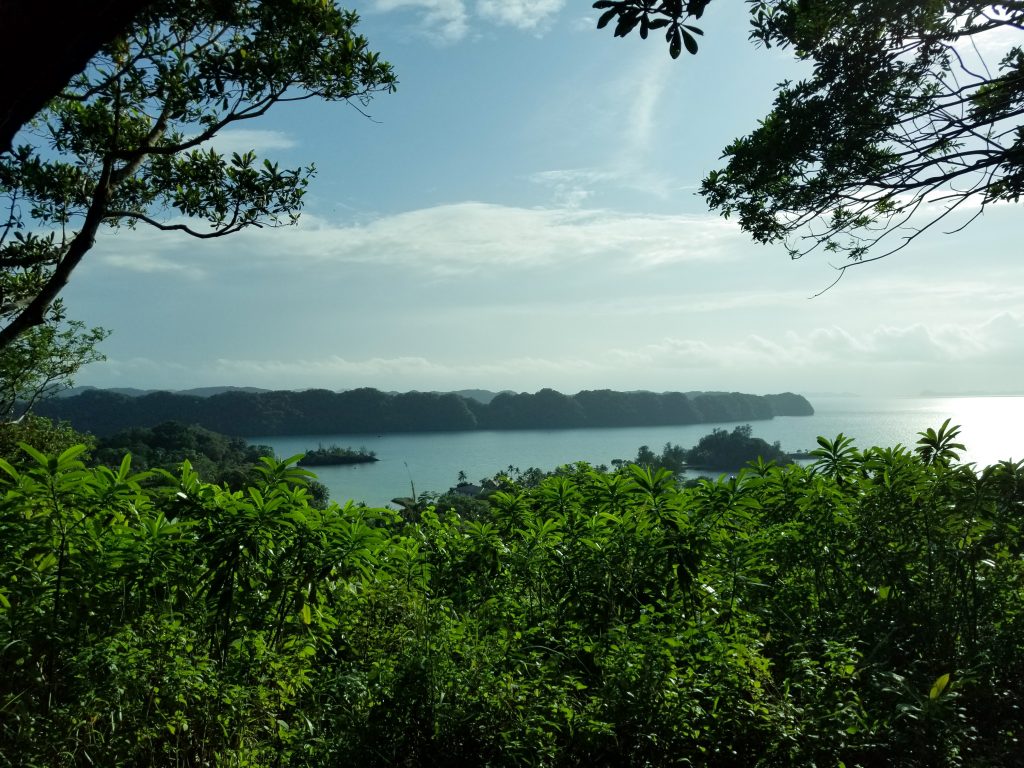 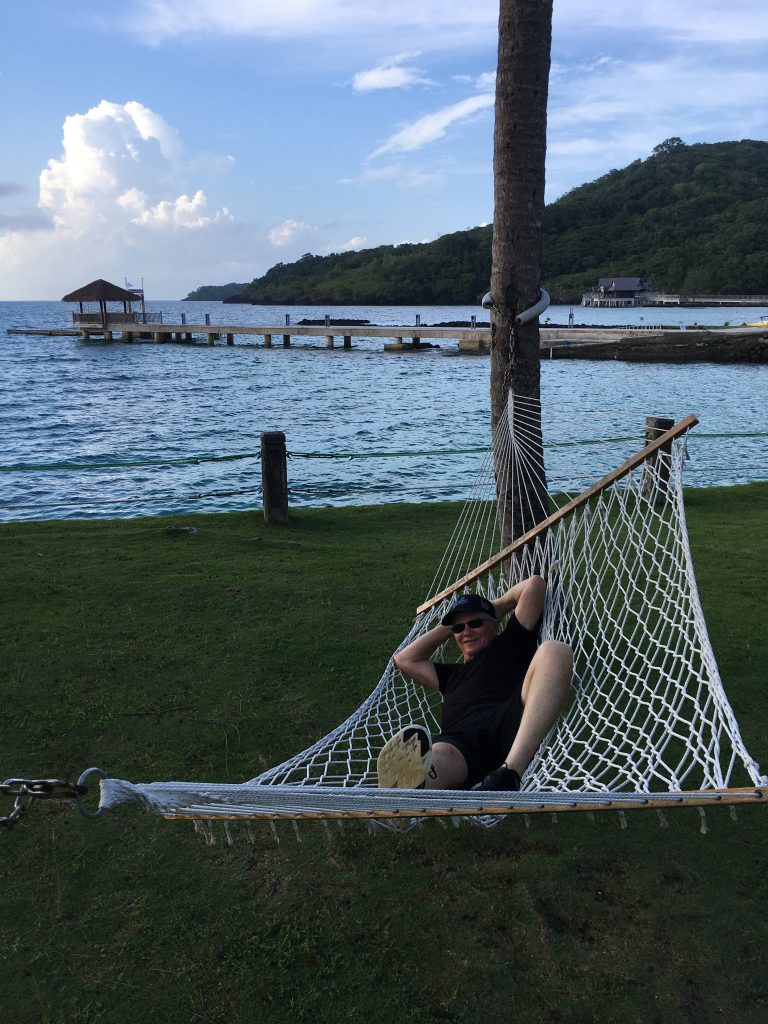 And of course, we had great meals together, both at the hotel restaurants/bars, and in local restaurants like Elilai Seaside Restaurant. Several restaurants will transport you to and from your hotel, so that makes it pretty easy to go out. 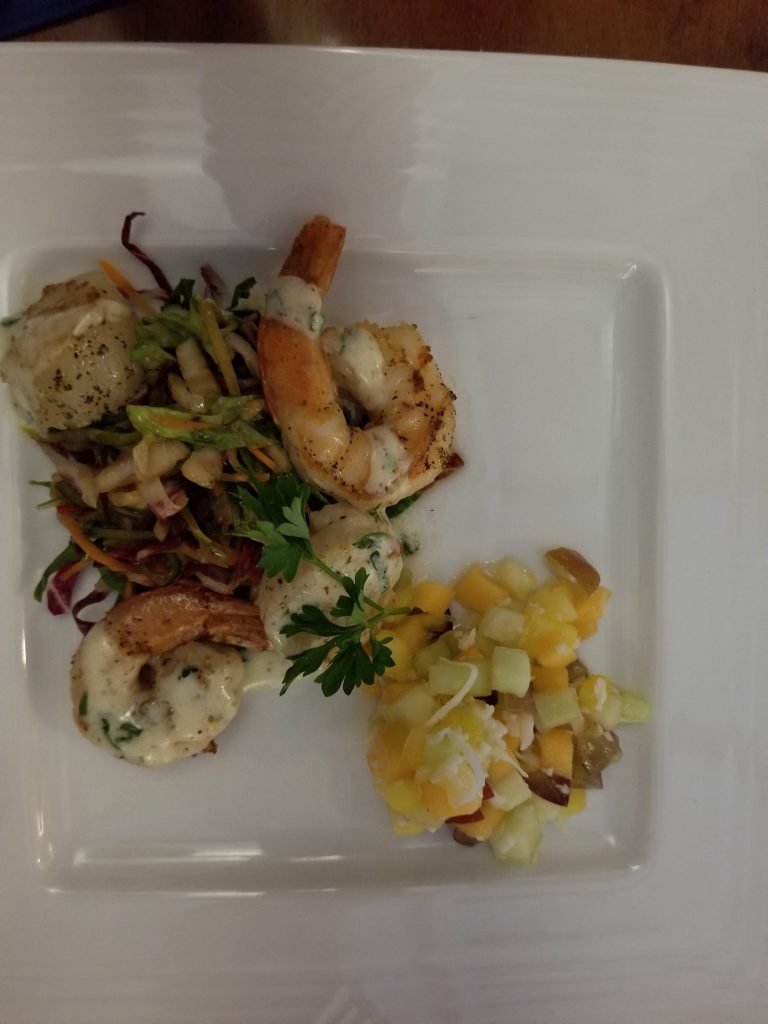 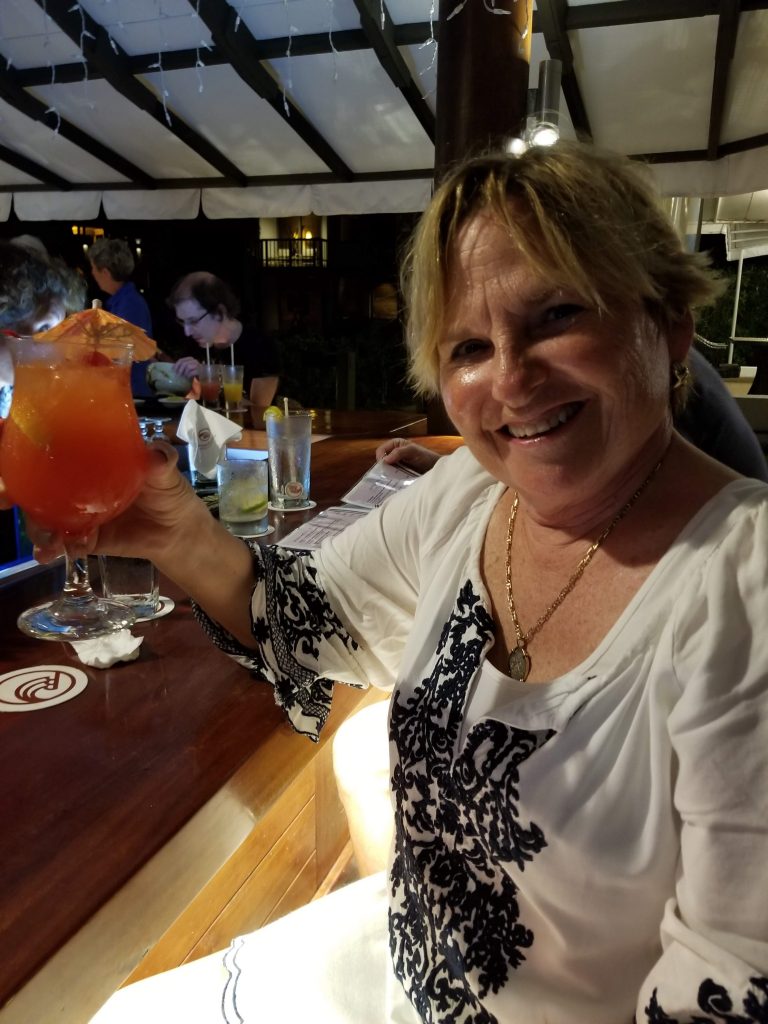 The trip home was long and exhausting, but at least we made all our connecting flights this time. Traveling about 24 hours door to door got us home safe (and some in our group had another 6 hours beyond our time). Was it worth it? If you like diving with sharks, manta rays, turtles, and healthy hard and soft corals, we think you’ll agree that these benefits are worth the lengthy travel time to get to Palau. 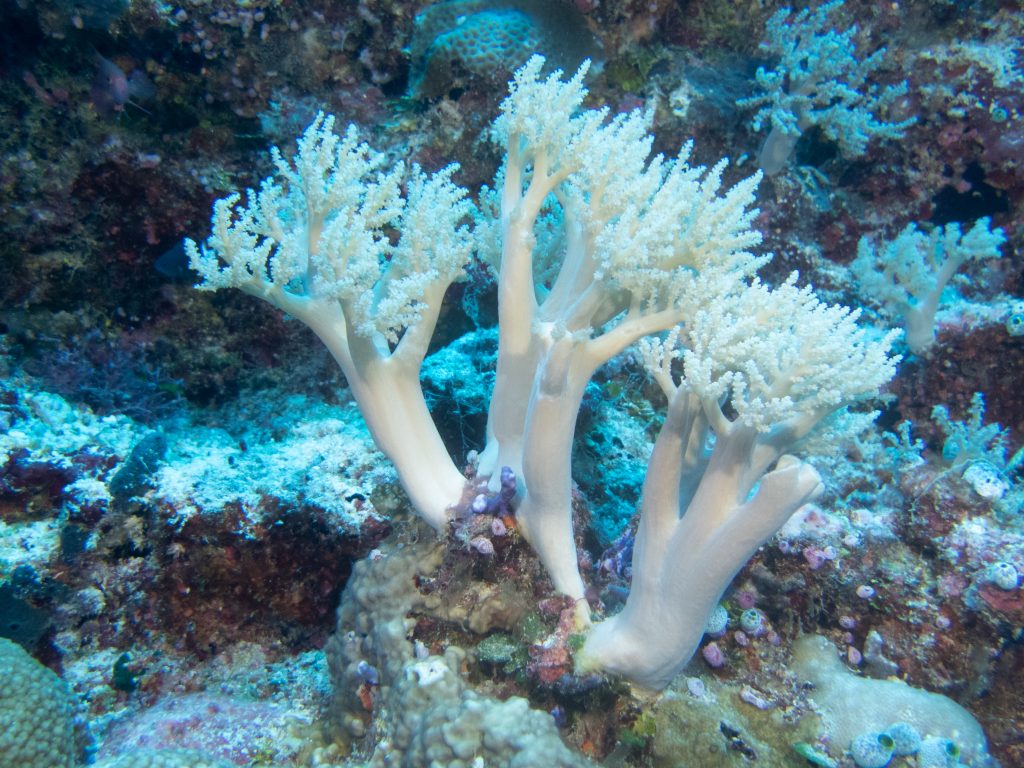 Check back on the blog site in a few days to see Hank’s iMovie of the trip.  For those who prefer videos, it will be a 15-minute summary of our whole trip, including Kauai and Palau.  Thanks for reading and enjoying the trip with us!